The capitalized term Biomorphism first emerged in 1936 when art historian Alfred H. Barr first used "biomorphic sculpture" for his exhibition Cubism and Abstract Art (1936). Barr, the founding director of New York's Museum of Modern Art, created a famous and influential flow chart that divided the development of abstraction into two currents. The trend that became known as Biomorphism was described as "intuitional.. emotional.. organic or biomorphic.. curvilinear.... in its exaltation of the mystical, the spontaneous and the irrational." It stood in contrast to the "Paul Cézanne - Cubist geometrical tradition" described as "intellectual, structural, geometrical, rectilinear and classical in its austerity and dependence upon logic and calculation." Contrasting the "Cezanne-Cubist" works of Piet Mondrian and Naum Gabo with the Biomorphism of Hans (Jean) Arp and Joan Miró, Barr quipped, "The shape of the square confronts the silhouette of the amoeba."

Barr also said that Biomorphism descended from "the art and theories of Gauguin and his circle" and that it "flows through the Fauvism of Matisse to the.. pre-war paintings of Kandinsky." In Munich in 1911, Wassily Kandinsky cofounded the Der Blaue Reiter group alongside artists Franz Marc, August Macke, Gabriele Münter, and others. The group emphasized an Expressionist approach and Kandinsky's influential On the Spiritual in Art: And Painting in Particular (1911) emphasized abstraction as most the effective means to reveal elemental truths, spiritual aspirations, and a vision of the future. His abstract works that led to his being dubbed "the father of abstract painting" were equally pioneering in Biomorphism, as elements in his Painting with White Border (1913) suggest trees, a figure on horseback, a dragon, while, as the artist wrote, the overall shape resembles both, "an upspringing flower," and an "egg-like shape." The piece used organic form and movement to convey what Kandinsky described as "extremely powerful impressions" of his short trip home to Moscow in 1912. Biomorphism's sculptural treatments also adopted Constantin Brâncuși's practice of Direct Carving, a process that emphasized the interaction with the raw material itself, as the grain, texture, and color shaped the final work. Additionally, his biomorphic shapes as seen in his Portrait of Mademoiselle Pogany (1912), where the head takes on an egg-like shape, also evoked a shell folding in on itself in curvilinear planes resonated with the later Surrealist movement. 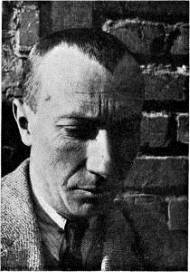 The sculptor, painter, and poet Hans Arp was a leading pioneer in a number of art movements, including Der Moderne Bund, the first artistic organization to promote modern art in Switzerland. As a result, he met Kandinsky in 1912, and a collaborative relationship and correspondence quickly developed between the two men and their companions, the artists Gabriele Münter and Sophie Taeuber. Arp was heavily influenced by Kandinsky's biomorphic works, such as Improvisation with Horses (1911), which he selected for a Der Moderne Bund exhibition. In Paris in 1920 Arp met Brancusi, and, while it did not lead to a long association, Arp would later write a poem in homage to the sculptor's work, describing Brancusi's sculptures as "fables plastiques" (meaning plastic fables), as one form metamorphosed into another. Subsequently, Arp began using biomorphic shapes in collages and wood reliefs, as seen in his Shirt Front and Fork (1922). In it, the curvilinear shape of the fork evokes a human hand, while the shirt front on the left ambiguously suggests the shape of a tooth, the face of a macaque, or a cross section of a green pepper, while simultaneously resisting any identification. The work's Biomorphism, in its provoking of associations, heralded Arp's transition from Dada to Surrealism.

Biomorphism became a major theme in Surrealist art, led by Arp, who was one of the group's founders, in 1924. Along with Joan Miró, and Yves Tanguy, he felt that biomorphic images reflected the connection between the human subconscious and reality more accurately. He often created his works in a state of automatism, the performance of creative actions without pre-calculated thought or composition. In the "The Surrealist Manifesto" (1924), André Breton defined the movement as "psychic automatism in its pure state, by which one proposes to express.. the actual functioning of thought." The concepts of the psychiatrists Sigmund Freud, as expressed in his The Interpretation of Dreams (1899), and Carl Jung's collective unconsciousness, in which humanity shared an unconscious state where myths and archetypes originated, were the scientific and theoretical underpinnings of the movement. The biomorphic approach was distinguished from the hyperrealism that dominated other Surrealist imagery, as exemplified in the works of Rene Magritte and Salvador Dali.

Biomorphism drew not only upon the new science of psychology but the biological and physical sciences. As historian Charlotte Douglas noted, at the beginning of the 20th century, "the image of cells - their internal structure, and their division and multiplication in the process of organic growth - now appeared in the popular press, and for the first time became easily accessible to artists." Kandinsky, as well as other artists, studied Ernst Haeckel's Art Forms in Nature (1904), illustrating biological and botanical forms. The discovery of subatomic particles influenced Wolfgang Paalen, while Yves Tanguy often employed geological images in his paintings. In 1941 the electron microscope became commercially available, and the resultant images, revealing the structures and processes of cellular forms, reached a wide audience and reinvigorated artistic interest.

World War II splintered the avant-garde art world in Paris, as many artists fled from the German occupation. Miró returned to Spain and Arp to Zurich, while Tanguy, Breton, Max Ernst, Marcel Duchamp, and Salvador Dalí went to New York, where they had a revitalizing influence. Miró's 1941 retrospective at the Museum of Modern Art received a great deal of artistic and critical attention, and Peggy Guggenheim's Art of This Century Gallery, opening in 1942, became an artistic hub, exhibiting both the leading Surrealists and the emerging Abstract Expressionists. Arshile Gorky, Isamu Noguchi, Roberto Matta, and Louise Bourgeois became a kind of second wave of Surrealists working in biomorphic forms. At the same time, the Abstract Expressionists Jackson Pollock, Robert Motherwell, and William Baziotes, along with Gorky, began meeting at Matta's studio to explore automatism, though emphasizing a kind of automatic gestural painting, while developing biomorphic imagery.

Biomorphic painting often employed automatism to access the artist's unconscious connection to a deep internal reality. Though he never officially joined the Surrealists, Joan Miró was among the first to pioneer automatic drawing, a practice he developed as a student in Barcelona. In art classes he, like other students, would wear a blindfold to draw by touch. Automatism was viewed as having a genuine, more primitive relationship to both the materials used and to nature itself. Biomorphic forms were diverse, sometimes evoking microscopic life, cellular forms, or marine organisms as seen in Yves Tanguy's The Ribbon of Extremes (1932) where biomorphic forms reminiscent of marine life are strewn across a beach. Gorky strived to create "living organisms floating in vivid color." In the 1930s Roberto Matta began creating his "Psychological Morphologies," which he also called "Inscapes," suggesting their depiction of internal landscapes.

To create biomorphic images and textures, artists employed innovative painting techniques like decalcomania, where a piece of glass or paper was placed over a painted surface then removed. Originally used as a decorative technique, Ernst used decalcomania in his Europe after the Rain (1940-42) to evoke a proliferation of ruinous growth. He also developed frottage, laying paper over an object and then rubbing with charcoal to create an imprint. With Miró, he developed grattage, placing an object under a piece of paper and painting over it, then, subsequently, scraping the paint away. Biomorphic sculpture emphasized the practice of Direct Carving and using the material's grain, texture, and density to energetically shape the artwork. As a result, wood, marble, and local stones were often preferred materials. Since Direct Carving involved intense engagement; many of the final pieces expressed an intimate involvement that connected the work to the artist and viewer's subconscious. Sometimes created on a small scale, the organic forms, resembling shells, stones, or small living creatures, could be held and rearranged by the viewer with the result that they evoked ever more associations, as seen in Arp's pioneering works like Sculpture to be Lost in the Forest (1932).

Barbara Hepworth and Henry Moore's biomorphic forms emphasized a correspondence between the human body and the natural landscape. Hepworth pioneered "piercing" the form with an empty space so that the holes would lend themselves to both abstracting the human form while also suggesting eroded landforms. Many of the Biomorphic artists developed a signature visual vocabulary, as seen in Miró's preoccupation with birds, the sun, the moon, and personages (unidentifiable but humanoid figures), or Isamu Noguchi's interlocking sculptures like Kuoros (1945). By the 1950's Arp, Miró, Karl Hartung, and Moore were creating a great many public sculptures, cast in bronze, as seen in Arp's Cloud Shepherd (1953), or in concrete, as seen in Miró's Dona i ocell (Woman and Bird) (1982). A number of furniture designers, including the American couple Charles and Ray Eames, the Finnish-American industrial designer and architect Eero Saarinen, and the artist Isamu Noguchi employed biomorphic designs. Charles and Ray Eames and Saarinen collaborated in 1940 on furniture designs that were awarded first prize in the Museum of Modern Art's Organic Design in Home Furnishings competition. In 1946 the museum held Charles Eames' exhibition, making him the first designer to have a solo MoMA show. New technologies, including laminates and the ability to shape and bend materials, made it possible for designers to explore ever more organic designs, and the rounded shapes appealed to the public both in terms of comfort and modern aesthetic appeal. Saarinen's noted designs included his Womb Chair, Model No. 70 (1947-48) and Tulip Chair (1956), which was made of aluminum, molded fiberglass, and a plastic bonded finish. Isamu Noguchi felt that all of his works, whether furniture, lamps, gardens, or public works of art, could be considered sculpture. His iconic and classic coffee table, designed in 1946, used a glass top over two interlocking pieces of wood of biomorphic shape. In Denmark the architect Arne Jacobsen became best known for his chairs the Ant (1951), Egg (1957), and Swan (1957), which have become ubiquitous modern styles. The Eames Lounge Chair and Ottoman, as well as Noguchi's table, are still being produced today.

The 1950s became dominated by Abstract Expressionism. Art historian Deborah Wye wrote: "the profound shift into abstraction that overtook many American artists between 1947 and 1950 constituted a break that put an end to the exploration of the biomorphic and organic: Arshile Gorky died, de Kooning literally tore the biomorphic to shreds in his 1948-49 black paintings, and William Baziotes commenced treading water."

Nonetheless, Miró and Arp continued to work biomorphically, their fame attracting commissions for monumental public works. In England, Moore and Hepworth continued to define modern British sculpture and influenced Eduardo Paolozzi, Anthony Caro, and Phillip King. Later, contemporary artists such as Tracey Emin, Charlotte Moth, and Rachel Whiteread were inspired by both Hepworth's work and her position as a role model for female artists.

Biomorphism influenced later artists, like Anish Kapoor whose biomorphic sculptures, as he said, "form themselves out of each other," as if growing out of walls or floors. Lynda Benglis poured brightly colored polyurethane foam over wire armatures to create what art critic Hilarie M. Sheets described as "evocative of lava flows, monstrous crustaceans." Eva Hesse's biomorphic work like Untitled (Rope Piece) (1970) was described by art critic Grace Glueck as "like the work of giant spiders gone berserk.. Its strident arrhythmia seems to mock comfortable notions of composition and aesthetic purpose." Biomorphism also influenced the designers Ron Arad, Paul Rand, Lucienne Day, and Julian Hatton. Louise Bourgeois, who remained relatively unknown until the 1970s, continued to create powerful, darkly psychological, biomorphic sculptures into the 21st century.

Important Art and Artists of Biomorphism