Modern art is the creative world's response to the rationalist practices and perspectives of the new lives and ideas provided by the technological advances of the industrial age that caused contemporary society to manifest itself in new ways compared to the past. Artists worked to represent their experience of the newness of modern life in appropriately innovative ways. Although modern art as a term applies to a vast number of artistic genres spanning more than a century, aesthetically speaking, modern art is characterized by the artist's intent to portray a subject as it exists in the world, according to his or her unique perspective and is typified by a rejection of accepted or traditional styles and values.

The Beginnings of Modern Art 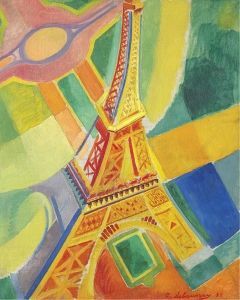 The centuries that preceded the modern era witnessed numerous advancements in the visual arts, from the humanist inquiries of the Renaissance and Baroque periods to the elaborate fantasies of the Rococo style and the ideal physical beauty of 18th-century European Neoclassicism. However, one prevalent characteristic throughout these early modern eras was an idealization of subject matter, whether human, natural, or situational. Artists typically painted not what they perceived with subjective eyes but rather what they envisioned as the epitome of their subject.

Age of Modernism and Art

The modern era arrived with the dawn of the industrial revolution in Western Europe in the mid-19th century, one of the most crucial turning points in world history. With the invention and wide availability of such technologies as the internal combustion engine, large machine-powered factories, and electrical power generation in urban areas, the pace and quality of everyday life changed drastically. Many people migrated from the rural farms to the city centers to find work, shifting the center of life from the family and village in the country to the expanding urban metropolises. With these developments, painters were drawn to these new visual landscapes, now bustling with all variety of modern spectacles and fashions.

A major technological development closely-related to the visual arts was photography. Photographic technology rapidly advanced, and within a few decades a photograph could reproduce any scene with perfect accuracy. As the technology developed, photography became increasingly accessible to the general public. The photograph conceptually posed a serious threat to classical artistic modes of representing a subject, as neither sculpture nor painting could capture the same degree of detail as photography. As a result of photography's precision, artists were obliged to find new modes of expression, which led to new paradigms in art.

The Artist's Perspective and Modern Art

In the early decades of the 19th century, a number of European painters began to experiment with the simple act of observation. Artists from across the continent, including portraitists and genre painters such as Gustave Courbet and Henri Fantin-Latour, created works that aimed to portray people and situations objectively, imperfections and all, rather than creating an idealized rendition of the subject. This radical approach to art would come to comprise the broad school of art known as Realism.

Also early in the 19th century, the Romantics began to present the landscape not necessarily as it objectively existed, but rather as they saw and felt it. The landscapes painted by Caspar David Friedrich and J.M.W. Turner are dramatic representations that capture the feeling of the sublime that struck the artist upon viewing that particular scene in nature. This representation of a feeling in conjunction with a place was a crucial step for creating the modern artist's innovative and unique perspective. Similarly, while some artists focused on objective representation, others shifted their artistic focus to emphasize the visual sensation of their observed subjects rather than an accurate and naturalistic depiction of them. This practice represents the beginnings of abstraction in the visual arts. Two key examples of this are James McNeill Whistler's Nocturne in Black and Gold: The Falling Rocket (1874) and Claude Monet's Boulevard des Capucines (1873). In the former, the artist couples large splatters and small flecks of paint to create a portrait of a night sky illuminated by fireworks that was more atmospheric than representational. In the latter, Monet provides an aerial view of bustling modern Parisian life. In portraying this scene, Monet rendered the pedestrians and cityscape as an "impression," or in other words, a visual representation of a fleeting, subjective, and slightly abstracted, perspective. The history of modern art is the history of the top artists and their achievements. Modern artists have strived to express their views of the world around them using visual mediums. While some have connected their work to preceding movements or ideas, the general goal of each artist in the modern era was to advance their practice to a position of pure originality. Certain artists established themselves as independent thinkers, venturing beyond what constituted acceptable forms of "high art" at the time which were endorsed by traditional state-run academies and the upper-class patrons of the visual arts. These innovators depicted subject matter that many considered lewd, controversial, or even downright ugly.

The first modern artist to essentially stand on his own in this regard was Gustave Courbet, who in the mid-19th century sought to develop his own distinct style. This was achieved in large part with his painting from 1849-1850, Burial at Ornans, which scandalized the French art world by portraying the funeral of a common man from a peasant village. The Academy bristled at the depiction of dirty farm workers around an open grave, as only classical myths or historical scenes were fitting subject matter for such a large painting. Initially, Courbet was ostracized for his work, but he eventually proved to be highly influential to subsequent generations of modern artists. This general pattern of rejection and later influence has been repeated by hundreds of artists in the modern era. 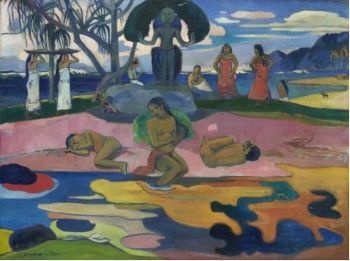 The discipline of art history tends to classify individuals into units of like-minded and historically connected artists designated as the different movements and "schools." This simple approach of establishing categories is particularly apt as it applies to centralized movements with a singular objective, such as Impressionism, Futurism, and Surrealism. For example, when Claude Monet exhibited his painting Impression, Sunrise (1872) as part of a group exhibition in 1874, the painting and the exhibition as a whole were poorly received. However, Monet and his fellow artists were ultimately motivated and united by the criticism. The Impressionists thus set a precedent for future independently minded artists who sought to group together based on a singular objective and aesthetic approach.

This practice of grouping artists into movements is not always completely accurate or appropriate, as many movements or schools consist of widely diverse artists and modes of artistic representation. For example, Vincent van Gogh, Paul Gauguin, Georges Seurat and Paul Cézanne are considered the principal artists of Post-Impressionism, a movement named so because of the artists' deviations from Impressionist motifs as well as their chronological place in history. Unlike their predecessors, however, the Post-Impressionists did not represent a cohesive movement of artists who united under a single ideological banner. Furthermore, the case can be made that some artists do not fit into any particular movement or category. Key examples include the likes of Auguste Rodin, Amadeo Modigliani, and Marc Chagall. Despite these complications, the imperfect designation of movements allows the vast history of modern art to be broken down into smaller segments separated by contextual factors that aid in examining the individual artists and works.

The Avant-Garde and The Progression of Modern Art

The avant-garde is a term that derives from the French "vanguard," the lead division going into battle, literally advance guard, and its designation within modern art is very much like its military namesake. Generally speaking, most of the successful and creative modern artists were avante-gardes. Their objective in the modern era was to advance the practices and ideas of art, and to continually challenge what constituted acceptable artistic form in order to most accurately convey the artist's experience of modern life. Modern artists continually examined the past and revalued it in relation to the modern.

Generally speaking, contemporary art is defined as any form of art in any medium that is produced in the present day. However, within the art world the term designates art that was made during and after the post-Pop art era of the 1960s. The dawn of Conceptualism in the late 1960s marks the turning point when modern art gave way to contemporary art. Contemporary art is a broad chronological delineation that encompasses a vast array of movements like Earth art, Performance art, Neo-Expressionism, and Digital art. It is not a clearly designated period or style, but instead marks the end of the periodization of modernism.

Postmodernism is the reaction to or a resistance against the projects of modernism, and began with the rupture in representation that occurred during the late 1960s. Modernism became the new tradition found in all the institutions against which it initially rebelled. Postmodern artists sought to exceed the limits set by modernism, deconstructing modernism's grand narrative in order to explore cultural codes, politics, and social ideology within their immediate context. It is this theoretical engagement with the ideologies of the surrounding world that differentiates postmodern art from modern art, as well as designates it as a unique facet within contemporary art. Features often associated with postmodern art are the use of new media and technology, like video, as well as the technique of bricolage and collage, the collision of art and kitsch, and the appropriation of earlier styles within a new context. Some movements commonly cited as Postmodern are: Conceptual art, Feminist art, Installation art and Performance art.

The Important Artists and Works of Modern Art