Born: November 12, 1840 - Paris, France
Died: November 10, 1917 - Meudon, France
Symbolism
Realism
Impressionism
Auguste Rodin
Main
Biography
Artworks
"To any artist, worthy of the name, all in nature is beautiful, because his eyes, fearlessly accepting all exterior truth, read there, as in an open book, all the inner truth."
1 of 5

"To any artist, worthy of the name, all in nature is beautiful, because his eyes, fearlessly accepting all exterior truth, read there, as in an open book, all the inner truth."
2 of 5

"It is the artist who is truthful and it is photography which lies, for in reality time does not stop, and if the artist succeeds in producing the impression of a movement which takes several moments for accomplishment, his work is certainly much less conventional than the scientific image, where time is abruptly suspended."
3 of 5

"Every part of the human figure is expressive. And is not an artist always isolating, since in Nature nothing is isolated."
4 of 5

"In front of the model, I work with the same desire to copy the truth as if I were making a portrait; I do not correct nature, I incorporate myself into her; she leads me. I can work only from a model. The sight of the human form fortifies and nourishes me."
5 of 5

François-Auguste-René Rodin's story recalls the archetypal struggle of the modern artist. He was born in obscurity and, despite showing early promise, rejected by the official academies. He spent years laboring as an ornamental sculptor before success and scandal set him on the road to international fame. By the time of his death, he was likened to Michelangelo. His reputation as the father of modern sculpture remains unchanged, and in recent years the wider exhibition of his many drawings has also elevated his reputation as a draughtsman. However, his many intimate - some have suggested exploitative - drawings of his models have altered the nature of the traditional respect paid to this eminent artist.

Here we see Rodin as the revered master of sculpture, a standard that all future sculptors measured against. A young officer was the model for this sculpture, which provided the first great succès de scandale, or "success of a scandal," of Rodin's career. The composition and rough surface of the figure were unconventional by academic standards. The subject also remained obscure - the title only vaguely suggesting classical art - and prompted confusion among critics; rather than clothe his image of man in respected symbolism, Rodin had presented a common man, naked. But controversy ultimately centered on allegations that the piece was a direct cast from the body rather than a modeled sculpture. The allegations were a testament to Rodin's technical skills, though the suggestion that he had somehow cheated heartily offended the sculptor, who was able to disprove the claim with photographs of his model. Rodin labored on this mammoth project for over twenty years. It was commissioned in 1880 as a set of doors for the planned Museum of Decorative Arts in Paris, but the museum never came to be, and he never finished the sculpture to his satisfaction. It is believed that Rodin chose to draw on Dante's Inferno for the subject matter. It was a deliberate attempt to rival Lorenzo Ghiberti's famous bronze doors for the Baptistery of Florence Cathedral, the Gates of Paradise (1425-52), the competition for which is often said to have initiated the Renaissance. Rodin initially planned to split the composition into a series of panels, just as Ghiberti had done, but after looking at images of Michelangelo's Last Judgment (1534-41), he opted for a more fluid arrangement of figures. When the plans for the museum were cancelled, Rodin's urge to complete the sculpture waned, and work dragged on. He exhibited a plaster version of the sculpture at an exhibition at the Place de l'Alma in Paris in 1900, but it was not until 1925, eight years after his death, that two bronze casts were created. Although The Gates of Hell was never completed to Rodin's satisfaction in his own lifetime, his work on the project did inspire many other finished works, and The Thinker is the most famous example. Deriving from a figure at the top of the sculpture who gazes with melancholy over the hellish scenes below him, he represents Dante, the author of the Divine Comedy that inspired The Gates of Hell (1899). Highly influenced by Michelangelo, the figure also represents modern, secular man - strong in mind and body, but lonely and doubtful in the position he has created for himself as master of his own universe. Although the seated figure is deeply lost in thought, the dynamic pose gives him a sense of movement. At first glance, the pose appears natural, but in fact the man's right arm on his left knee is twisted in an exaggerated fashion. Over fifty casts were made of this sculpture, which are today scattered throughout the world, making it one of Rodin's most famous works. Rodin also chose The Thinker as his tombstone. 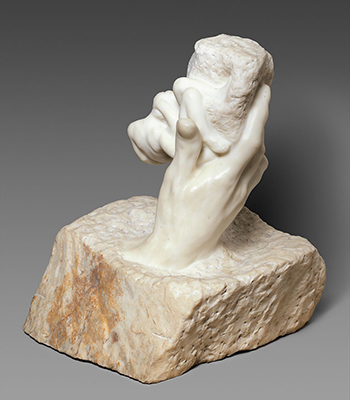 Books
websites
articles
video clips
More
Books
The books and articles below constitute a bibliography of the sources used in the writing of this page. These also suggest some accessible resources for further research, especially ones that can be found and purchased via the internet.
biography
works
View more books
websites
articles
View more articles
video clips
More
audio clips
Share
Do more