Wassily (Vasily) Wassilyevich Kandinsky was born in 1866 in Moscow to well educated, upper-class parents of mixed ethnic origins. His father was born close to Mongolia, while his mother was a Muscovite, and his grandmother was from the German-speaking Baltic. The bulk of Kandinsky's childhood was spent in Odessa, a thriving, cosmopolitan city populated by Western Europeans, Mediterraneans, and a variety of other ethnic groups. At an early age, Kandinsky exhibited an extraordinary sensitivity toward the stimuli of sounds, words, and colors. His father encouraged his unique and precocious gift for the arts and enrolled him in private drawing classes, as well as piano and cello lessons. Despite early exposure to the arts, Kandinsky did not turn to painting until he reached the age of 30. Instead, he entered the University of Moscow in 1886 to study law, ethnography, and economics. In spite of the legal focus of his academic pursuits, Kandinsky's interest in color symbolism and its effect on the human psyche grew throughout his time in Moscow. In particular, an ethnographic research trip in 1889 to the region of Vologda, in northwest Russia, sparked an interest in folk art that Kandinsky carried with him throughout his career. After completing his degree in 1892, he started his career in law education by lecturing at the university. 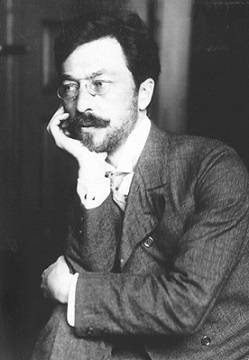 Despite his success as an educator, Kandinsky abandoned his career teaching law to attend art school in Munich in 1896. For his first two years in Munich he studied at the art school of Anton Azbe, and in 1900 he studied under Franz von Stuck at the Academy of Fine Arts. At Azbe's school he met co-conspirators such as Alexei Jawlensky, who introduced Kandinsky to the artistic avant-garde in Munich. In 1901, along with three other young artists, Kandinsky co-founded "Phalanx" - an artist's association opposed to the conservative views of the traditional art institutions. Phalanx expanded to include an art school, in which Kandinsky taught, and an exhibitions group. In one of his classes at the Phalanx School, he met and began a relationship with his student, Gabriele Munter, who became his companion for the next 15 years. As he traveled throughout Europe and northern Africa with Munter from 1903 until 1909, Kandinsky familiarized himself with the growing Expressionist movement and developed his own style based on the diverse artistic sources he witnessed on his travels. 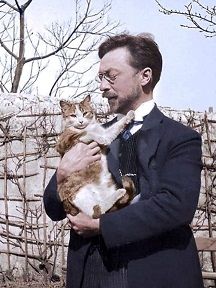 Kandinsky painted his breakthrough work, Der Blaue Reiter (1903) during this transitional period. This early work revealed his interest in disjointed figure-ground relationships and the use of color to express emotions rather than appearances - two aspects that would dominate his mature style. In 1909, he was one of the founding members of Neue Kunstlervereinigung Munchen (NKVM, or New Artists Association of Munich), a group that sought to accommodate the avant-garde artists whose practices were too radical for the traditional organizations and academies of the time. His paintings became more and more abstracted from the surrounding world as he gradually refined his style. He began titling works Improvisation, Composition, or Impression to further stress their distance from the objective world and continued to use similar titles throughout the rest of his career.

In 1911, in response to the rejection of one of Kandinsky's paintings from the annual NKVM exhibition, he and Franz Marc organized a rival exhibition and co-founded "Der Blaue Reiter" (The Blue Rider) - a loose association of nine Expressionist artists that included August Macke, Munter, and Jawlensky. Though their aims and approaches varied from artist to artist, in general the group believed in the promotion of modern art and the possibility for spiritual experience through the symbolic associations of sound and color - two issues very near and dear to Kandinsky's heart. Despite the similarities between the group's moniker and the title of Kandinsky's 1903 painting, the artists actually arrived at the name "Der Blaue Reiter" as a result of the combination of Marc's love of horses and Kandinsky's interest in the symbolism of the rider, coupled with both artists' penchant for the color blue. During their short tenure, the group published an anthology (The Blue Rider Almanac) and held three exhibitions. Additionally, Kandinsky published Concerning the Spiritual in Art (1911), his first theoretical treatise on abstraction that articulated his theory that the artist was a spiritual being that communicated through and was affected by line, color, and composition. He produced both abstract and figurative works at this time, but expanded his interest in non-objective painting. Composition VII (1913) was an early example of his synthesis of spiritual, emotional, and non-referential form through complex patterns and brilliant colors. The outbreak of World War I in 1914 led to the dissolution of Der Blaue Reiter, but, despite their short tenure, the group initiated and deeply inspired the highly influential German Expressionist style.

After Germany declared war on Russia, Kandinsky was forced to leave the country. He traveled to Switzerland and Sweden with Munter for almost two years, but returned to Moscow in early 1916, which effectively ended their relationship. In Moscow he courted and married Nina Andreevskaia, the young daughter of a Czarist colonel. While there, he not only became familiar with the art of Constructivists and Suprematists like Vladimir Tatlin and Kazimir Malevich, but also lived in the same building as Aleksander Rodchenko, and met other avant-garde luminaries like Naum Gabo, Lyubov Popova, and Varvara Stepanova. With the October Revolution in 1917, Kandinsky's plans to build a private school and studio were upset by the Communist redistribution of private wealth and instead, he worked with the new government to develop arts organizations and schools. Despite his participation in the development of the officially sanctioned new institutions, he felt increasingly removed from the avant-garde. His search for spirituality in art did not meld with the utilitarian aesthetic advocated by the young government and the artists it embraced.

In 1921, when architect Walter Gropius invited Kandinsky to Germany to teach at the Weimar Bauhaus, he accepted and moved to Berlin with his wife, gaining German citizenship in 1928. As a member of the innovative school, Kandinsky's artistic philosophy turned toward the significance of geometric elements - specifically circles, half-circles, straight lines, angles, squares, checkerboards, and triangles. In 1926, he published his second major theoretical work, Point and Line to Plane that outlined his ideas about a "science of painting." In both his work and theory he shifted from the romantic, intuitive expression of his pre-war canvases to an emphasis on constructively organized compositions.

When the Nazis closed the Bauhaus school in 1933, Kandinsky was forced to leave his adopted home in Germany and moved to France, where he remained for the rest of his life. He and his wife Nina settled in a small apartment in a suburb of Paris, Neuilly-sur-Seine, and were granted French citizenship in 1939. While in France, his style again shifted and he experimented with biomorphic forms, which were more organic than the harsh geometric shapes of his Bauhaus paintings. Although he continued to paint until his last year, Kandinsky's output slowed during the war and his art fell out of favor as the referential images of Cubism and Surrealism came to dominate the Parisian avant-garde. Despite his distance from the aesthetic forefront, Kandinsky continued to refine his style and revisited many of his previous themes and styles during this period, synthesizing elements of his entire oeuvre into vast, complex works. His late style combined the expressive palette of his earliest non-objective Compositions from the early 1910s with the more structured elements he investigated while at the Bauhaus as well as the biomorphic forms popularized by the Surrealists, like Joan Miró and Jean Arp.

The Nazis confiscated 57 of his canvases during their purge of "degenerate art" in 1937, but despite the Fascist proscription against his art, American patrons - notably Solomon R. Guggenheim - avidly collected his abstract work. His works became key to shaping the mission of the museum Guggenheim planned on opening dedicated to modern, avant-garde art. With over 150 works in the museum's collection, Kandinsky became known as the "patron saint of the Guggenheim." He died in December of 1944 in relative, but serene, isolation.

The Legacy of Wassily Kandinsky 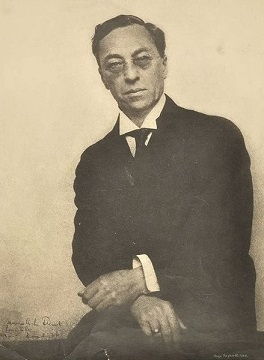 Kandinsky's work, both artistic and theoretical, played a large role in the philosophic foundation for later modern movements, in particular Abstract Expressionism and its variants like Color Field Painting. His late, biomorphic work had a large influence on Arshile Gorky's development of a non-objective style, which in turn helped to shape the New York School's aesthetic. Jackson Pollock was interested in Kandinsky's late paintings and was fascinated by his theories about the expressive possibilities of art, in particular, his emphasis on spontaneous activity and the subconscious. Kandinsky's analysis of the sensorial properties of color was immensely influential on the Color Field painters, like Mark Rothko, who emphasized the interrelationships of hues for their emotive potential. Even the 1980s artists working in the Neo-Expressionist resurgence in painting, like Julian Schnabel and Philip Guston, applied his ideas regarding the artist's inner expression on the canvas to their postmodern work. Kandinsky set the stage for much of the expressive modern art produced in the 20th century.