With the turn of the century in Europe, shifts in artistic styles and vision erupted as a response to the major changes in the atmosphere of society. New technologies and massive urbanization efforts altered the individual's worldview, and artists reflected the psychological impact of these developments by moving away from a realistic representation of what they saw toward an emotional and psychological rendering of how the world affected them. The roots of Expressionism can be traced to certain Post-Impressionist artists like Edvard Munch in Norway, as well as Gustav Klimt of the Vienna Secession. 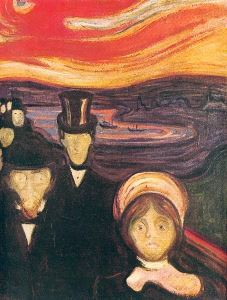 The late-19th-century Norwegian Edvard Munch emerged as an important source of inspiration for the Expressionists. His vibrant and emotionally charged works opened up new possibilities for introspective expression. In particular, Munch's frenetic canvases expressed the anxiety of the individual within the newly modernized European society; his famous painting The Scream (1893) evidenced the conflict between spirituality and modernity as a central theme of his work. By 1905 Munch's work was well known within Germany and he was spending much of his time there as well, putting him in direct contact with the Expressionists. In addition to Munch, the Flemish James Ensor was also an early influence that was studied and built upon. 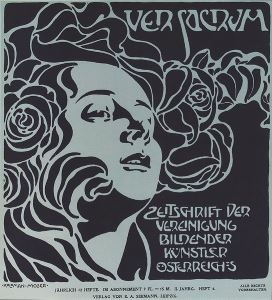 Another figure in the late-19th century that had an impact upon the development of Expressionism was Gustav Klimt, who worked in the Austrian Art Nouveau style and led the Vienna Secession. Klimt's lavish mode of rendering his subjects in a bright palette, elaborately patterned surfaces, and elongated bodies was a step toward the exotic colors, gestural brushwork, and jagged forms of the later Expressionists. Klimt was a mentor to painter Egon Schiele, and introduced him to the works of Edvard Munch and Vincent van Gogh, among others, at an exhibition of their work in 1909.

The Advent of Expressionism in Germany 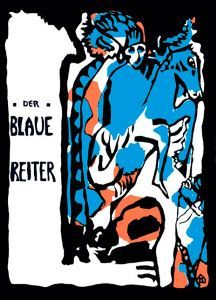 Although it included various artists and styles, Expressionism first emerged in 1905, when a group of four German architecture students who desired to become painters - Ernst Ludwig Kirchner, Fritz Bleyl, Karl Schmidt-Rottluff, and Erich Heckel - formed the group Die Brücke (The Bridge) in the city of Dresden. A few years later, in 1911, a like-minded group of young artists formed Der Blaue Reiter (The Blue Rider) in Munich, after the rejection of Wassily Kandinsky's painting The Last Judgment (1910) from a local exhibition. In addition to Kandinsky, the group included Franz Marc, Paul Klee, and August Macke, among others, all of whom made up the loosely associated group.

The term "Expressionism" is thought to have been coined in 1910 by Czech art historian Antonin Matejcek, who intended it to denote the opposite of Impressionism. Whereas the Impressionists sought to express the majesty of nature and the human form through paint, the Expressionists, according to Matejcek, sought only to express inner life, often via the painting of harsh and realistic subject matter. It should be noted, however, that neither Die Brücke, nor similar sub-movements, ever referred to themselves as Expressionist, and, in the early years of the century, the term was widely used to apply to a variety of styles, including Post-Impressionism.

Influenced by artists such as Munch, van Gogh, and Ensor, the members of the Dresden-based Die Brücke group sought to convey raw emotion through provocative images of modern society. They depicted scenes of city dwellers, prostitutes, and dancers in the city's streets and nightclubs, presenting the decadent underbelly of German society. In works such as Kirchner's Street, Berlin (1913), they emphasized the alienation inherent to modern society and the loss of spiritual communion between individuals in urban culture; fellow city dwellers are distanced from one another, acting as mere commodities, as in the prostitutes at the forefront of Kirchner's composition.

Unlike the pastoral scenes of Impressionism and the academic drawings of Neoclassicism, Die Brücke artists used distorted forms and jarring, unnatural pigments to elicit the viewer's emotional response. The group was similarly united by a reductive and primitive aesthetic, a revival of older media and medieval German art, in which they used graphic techniques such as woodblock printing to create crude, jagged forms.

The group published a woodcut broadsheet in 1906, called Programme, to accompany their first exhibition. It summarized their break with prevailing academic traditions calling for a freer, youth-oriented aesthetic. Although mostly written by Kirchner, this poster served as manifesto stating the ideals of Die Brücke. The members of Die Brücke drew largely from the writings of German philosopher Friedrich Nietzsche in terms of both their artistic project and their philosophical grounding. Their name came from a quote from Thus Spoke Zarathustra (1883-85) that states, "What is great in man is that he is a bridge and not an end." The group exhibited and collaborated through 1913, when Kirchner penned Chronik der Brücke (Brücke Chronicle) and the collective effectively dissolved.

The artists of Der Blaue Reiter group shared an inclination towards abstraction, symbolic content, and spiritual allusion. They sought to express the emotional aspects of being through highly symbolic and brightly colored renderings. Their name emerged from the symbol of the horse and rider, derived from one of Wassily Kandinsky's paintings; for Kandinsky, the rider symbolized the transition from the tangible world into the spiritual realm and thus acted as a metaphor for artistic practice. For other members such as Franz Marc, Paul, Klee, and Auguste Macke, this notion became a central principle for transcending realistic depiction and delving into abstraction.

Although Der Blaue Reiter never published a manifesto, its members were united by their aesthetic innovations, which were influenced by medieval and primitivist art forms, Cubism, and Fauvism. However, the group itself was short-lived; with the outbreak of World War I in 1914, Franz Marc and Auguste Macke were drafted into German military service and were killed soon after. The Russian members of the group - Wassily Kandinsky, Alexej von Jawlensky, and others - were all forced to return home. Der Blaue Reiter dissolved immediately thereafter.

Expressionism's elasticity has meant that many artists beyond Germany's borders have been identified with the style. Georges Rouault, the French artist sometimes described as an Expressionist, may have influenced the Germans, rather than the other way around. He learned his vivid use of color and distortion of form from Fauvism, and, unlike his German Expressionist counterparts, Rouault expressed an affinity for his Impressionist predecessors, particularly for the work of Edgar Degas. He is well known for his devotion to religious subjects, and particularly for his many depictions of the crucifixion, rendered in rich color and heavy layers of paint.

The Russian-French Jewish artist Marc Chagall drew upon currents from Cubism, Fauvism, and Symbolism to create his own brand of Expressionism in which he often depicted dreamy scenes of his Belarusian hometown, Vitebsk. While in Paris during the height of the modernist avant-garde, Chagall developed a visual language of eccentric motifs: "ghostly figures floating in the sky, the gigantic fiddler dancing on miniature dollhouses, the livestock and transparent wombs and, within them, tiny offspring sleeping upside down." In 1914, his work was exhibited in Berlin, and had an impact on the German Expressionists extending beyond World War I. He never associated his work with a specific movement, and considered his repertoire to be a vocabulary of images meaningful to himself, but they inspired many, including the Surrealists. Pablo Picasso remarked in the 1950s, "When Matisse dies, Chagall will be the only painter left who understands what color really is."

Chaim Soutine, the Russian-Jewish, Paris-based painter, was a major proponent of the development of Parisian Expressionism. He synthesized elements from Impressionism, the French Academic tradition, and his own personal vision into an individualized technique and version of the style. The artist's expressive style has proved highly influential on subsequent generations.

Austrian artists such as Oskar Kokoschka and Egon Schiele, were inspired by German Expressionism, but interpreted the style in their individual and personalized manners never forming an official association like the Germans. Kokoschka and Schiele sought to express the decadence of modern Austria through similarly expressive representations of the human body; by sinuous lines, garish colors, and distorted figures, both artists imbued their subjects with highly sexual and psychological themes. Although Kokschka and Schiele were the central proponents of the movement in Austria, Kokoschka became increasingly involved in German Expressionist circles; he left Austria and moved to Germany in 1910. Initially Kokoschka worked in a Viennese Art Nouveau style, but starting in 1908 he instinctively worked as an Expressionist, passionately seeking to expose an inner sensibility of the sitter in his early portraits. Schiele left Vienna in 1912 but remained in Austria, where he worked and exhibited until his death in the worldwide influenza epidemic of 1918.

While certain artists rejected Expressionism, others would continue to expand upon its innovations as a style. For example, in the 1920s, Kandinsky transitioned to completely non-objective paintings and watercolors, which emphasized color balance and archetypal forms, rather than figurative representation. However, Expressionism would have its most direct impact in Germany and would continue to shape its art for decades afterwards. After World War I, Expressionism began to lose impetus and fragment. The Neue Sachlichkeit (New Objectivity) movement developed as a direct response to the highly emotional tenets of Expressionism, while the Neo-Expressionists emerged in Germany and then in the United States much later in the 20th century, reprising the earlier Expressionist style.

Already by 1918, the Dada manifesto claimed, "Expressionism...no longer has anything to do with the efforts made by active people." But its ethos would have a vivid afterlife; it was crucial in the early formation of artists Otto Dix, George Grosz, and Max Beckmann, who together formed the movement known as the Neue Sachlichkeit (New Objectivity). These artists sought, as the name suggests, an unsentimental and objective approach to artistic production. Their naturalistic renderings of individuals and urban scenes highlighted this new aesthetic and paralleled the general attitude of practicality that characterized Weimar culture.

The emergence of Georg Baselitz's paintings of layered, vibrant colors and distorted figures in the 1960s, and of Anselm Kiefer's images buried amidst thick impasto built up from a variety of materials on the canvas in the 1970s, signaled an important and influential revival of the style within Germany, which would eventually culminate in a global Neo-Expressionist movement in the 1980s. Artists in New York City, like Julian Schnabel, also employed thick layers of paint, unnatural color palettes and gestural brushwork to hearken back to the Expressionist movement earlier in the 20th century.

The original Expressionist movement's ideas about spirituality, primitivism, and the value of abstract art would also be hugely influential on an array of unrelated movements, including Abstract Expressionism. The Expressionists' metaphysical outlook and instinctive discomfort with the modern world impelled them to antagonistic attitudes that would continue to be characteristic of various avant-garde movements throughout the century.

Important Art and Artists of Expressionism