British Impressionism
Main
History & Concepts
Artworks
"If the man who paints only the tree, or flower, or other surface he sees before him were an artist, the king of artists would be the photographer. It is for the artist to do something beyond this."
1 of 9
James Abbot McNeill Whistler
"Perhaps the importance that we must attach to the achievement of an artist or a group of artists may properly be measured by the answer to the following question: Have they so wrought that it will be impossible henceforth, for those who follow, ever again to act as if they had not existed?"
2 of 9
Walter Sickert
"Art is a goddess of dainty thought, reticent of habit, abjuring all obtrusiveness, purposing in no way to better others. She is, withal selfishly occupied with her own perfection only - having no desire to teach."
3 of 9
James Abbot McNeill Whistler
"Nature contains the elements, in colour and form, of all pictures, as the keyboard contains the notes of all music. But the artist is born to pick, and choose, and group with science, these elements, that the result may be beautiful - as the musician gathers his notes, and forms his chords, until he brings forth from chaos glorious harmony."
4 of 9
James Abbot McNeill Whistler
"When the evening mist clothes the riverside with poetry, as with a veil - ...the poor buildings lose themselves in the dim sky - and the tall chimneys become campanile - and the warehouses are palaces in the night - and the whole city hangs in the heavens, and faireyland [sic.] is before us"
5 of 9
James Abbot McNeill Whistler
"Essentially and firstly [Impressionism] is not realism. It has no wish to record anything merely because it exists. It is not occupied in a struggle to make intensely real and solid the sordid or superficial details of the subjects it selects. It accepts, as the aim of the picture, what Edgar Allan Poe asserts to be the sole legitimate province of the poem, beauty."
6 of 9
Walter Sickert
"In its search through visible nature for the elements of this same beauty, [Impressionism] does not admit the narrow interpretation of the word 'Nature'...It is, on the contrary, strong in the belief that for those who live in the most wonderful and complex city in the world [London], the most fruitful course of study lies in a persistent effort to render the magic and the poetry which they daily see around them."
7 of 9
Walter Sickert
"I have both read and heard it stated that Impressionists ignore tradition. Now I propose to show that so far from ignoring the tradition they follow the highest tradition of all time which is inspired by nature and nature only."
8 of 9
Philip Wilson Steer
"We are told that Impressionism is a passing craze and nothing but a fashion....Is it a craze that we should recognize the fact that nature is bathed in atmosphere? Is it a fashion to treat a picture so that unity of vision may be achieved...? No! It is not fashion, it is a law."
9 of 9
Philip Wilson Steer

The movement of Impressionism, which originated in France, was concerned with capturing the momentary impression made by a visual scene on the artist's eye. It took hold in Britain both through continental influences and independent lines of development, from J.M.W. Turner's expressive seascapes to the delicate night scenes of James Abbott McNeill Whistler. Whistler's work of the 1860s-80s had a profound impact on a younger generation of painters such as Walter Sickert and Philip Wilson Steer, who were involved in creating the defining networks and events of British Impressionism, including the New English Art Club and the London Impressionists exhibition, towards the end of the 1880s. Meanwhile, another group of Whistler's acolytes in Scotland, the Glasgow Boys, developed a distinctive Impressionist-influenced style equally indebted to the Naturalism of Jules Bastien-Lepage. While all this was happening, British artists were also developing vital and sustaining creative relationships with French contemporaries and masters, such as Sickert with Degas, which also fed into the evolution of British Impressionism. 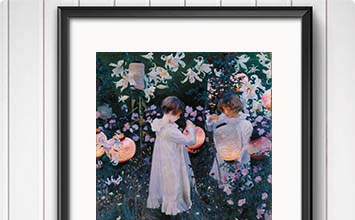 The question of when Impressionism took hold in Britain is unresolved because Impressionism's geographical and historical origins remain a matter of debate. In 1885, when a new art club was founded by a group of progressively minded British artists enthused by the Impressionist style, they initially considered calling themselves The Society of Anglo-French Painters. Although they eventually decided on New English Art Club - and over the following decade that collective became a hub for developments in British Impressionism - their original preference of name suggests that they saw Impressionism as a recent foreign trend, a French phenomenon of the 1860s-70s, by whose example they could revive creative spirits across the channel. In this sparkling and sultry scene, Whistler depicts revelers in the Cremorne Gardens, a park by the banks of the River Thames in south London. Through a haze of black, gold, and green pigment, Whistler evokes the misty spectacle of a fireworks display. In the foreground, figures are picked out almost as specters or shadows, their thin silhouettes allowing the background wash - created with highly liquid paint - to show through. A fireworks display is recorded through expressionistic dashes of gold, set against a darker area to the left representing the engulfing murk of the night sky.

Many of Whistler's concerns in this painting reflect fundamental aspects of Impressionism, even as he sought to preserve his individuality as an artist, most obviously the decision to depict a single moment in time, emphasized by freezing the exploding rocket in mid-air. His painterly brushwork, leaving traces and flourishes on the canvas, not attempting to hide the artist's role in creating the artwork, also aligns with key feature of Impressionism. At the same time, the blurry, smoky effect of the painting was a realistic one, a response to the highly polluted state of London skies during the 1870s. In his famous "Ten O Clock Lecture" on art, delivered in February 1885, Whistler rhapsodized on that time of evening "when the evening mist clothes the riverside with poetry, as with a veil - and the poor buildings lose themselves in the dim sky - and the tall chimneys become campanile - and the warehouses are palaces in the night - and the whole city hangs in the heavens, and faireyland [sic.] is before us ."

It is worth emphasizing not only the significance of Whistler's artwork to the development of Impressionism as a whole - his biographer Daniel Sutherland states that "nothing in the first Impressionist exhibition [held in Paris in 1874] could touch it " - but in particular its impact on Whistler's British contemporaries and followers. Artists such as Walter Sickert would combine the bleak tonal brilliance and hazy ambience of the Nocturne series with individual features and emphases of their own, in Sickert's case a focus on social spectacle learned from Edgar Degas, to produce uniquely British or London-centric Impressionist genre pieces.

In this glamorous portrait of a belle époque beauty, Whistler shows how his Impressionist style translated into portraiture. The model's informal posture - as if she were responding to a voice off-frame - reflects that concern with capturing the evanescent moment that was typical of Impressionism. The artist's emphasis on the long, curvaceous sweep of back and dress, meanwhile, and the sense that we are invited to gaze almost secretively or furtively on the model because of her orientation away from us, brings to the painting something of the subtle sexual charge of Édouard Manet's likenesses of Berthe Morisot.

The subject for the painting was Whistler's sister-in-law Ethel Whibley, his secretary and confidante, of whom he produced many portraits, often with same stylish and seductive qualities as The Andalusian. However, the painter was also an afficionado of women's fashion, and critic Richard Dorment has argued that this work "is not a portrait of a person, but of a dress ." That dress, according to Dorman, has more to do with Parisian high fashion of the late nineteenth century - a period of relative peace and prosperity when culture flourished in France, known as the belle époque - than with the costume of Andalusia (the southern region of Spain.) That said, Whistler revered the 17th-century Spanish painter Diego Velázquez, and it is likely that the muted color palette and understated brushwork reflect the old master's influence, as well as a wider interest at this time in Hispanic folk culture and style.

In its unabashed focus on fashion and style, this work indicates the connection Whistler established between Impressionism and the Art for Art's Sake philosophy and beauty worship of the late nineteenth century, including in Britain, where the Decadent and Aesthetic movements were in full swing by the time this piece was completed. Artists and writers such as Oscar Wilde and Aubrey Beardsley would have appreciated the aims and ambience of Whistler's portrait, which eschews all moral, social, and didactic content in its pursuit of female elegance. In the early 1880s Walter Sickert, still in his early twenties, became a devoted follower of Whistler, entranced by the older artist's sultry color palettes. The young painter became Whistler's etching assistant, and worked on a series of tonal studies heavily indebted to him. Then, in 1883, he was introduced to the French Impressionist Edgar Degas, whose snapshot-like scenes of city life, such as Place de la Concorde (1875), would profoundly affect Sickert's career. He was also enthused by Degas's depiction of the hedonistic, seamy social life of the French capital, and for the remainder of his life would bring a similarly roving eye to the dancehalls and brothels of London.

It is possible to see works such as Katie Lawrence at Gatti's as combining a Whistlerian tonal range with the documentarist's eye and infatuation with night life personified by Degas. Critic Kenneth McConkey notes that when Sickert returned to London from a trip to Paris in 1885, "it was to give glowing accounts of the 'ballet girls' of an artist referred to by [his friend] Mortimer Menpes as 'Digars'"." Sickert acquired a Degas painting, and became "attracted to the café-concert, the low-life theatre which was arousing the interest of literati ." In this mood, he began to visit the performances of singer Katie Lawrence at Gatti's Hungerford Palace of Varieties, a music hall opened by the Swiss impresario Carlo Gatti in 1857. According to Sickert critic Wendy Baron, the painter produced 166 studies of Lawrence onstage between 1885 and 1888, which became the basis for a large number of paintings. The above work is the only one which survives; though completed several years later, it reflects the spirit of the earlier period in which the series was devised.

Baron notes that Katie Lawrence at Gatti's, based on "hundreds of tiny studies of the stage architecture the performers and the audience", was a matter of "extracting an effective composition from the mass of information gathered ." In this sense, the apparent informality of the piece is an illusion. Sickert followed Degas's atypically Impressionist advice that the artist should work in the studio to create a likeness of a scene at a particular moment more real than that moment itself. The result is an exemplary work of British Impressionism, capturing the spirit of the age in the artist's home city just as the French Impressionists had for Paris at the end of the nineteenth century.