"Art is surface and symbol. Those who go beneath the surface do so at their own peril."
2 of 13

"If a work of art is rich and vital and complete, those who have artistic instincts will see its beauty and those to whom ethics appeal more strongly will see its moral lesson."
3 of 13

"A temperament capable of receiving, through an imaginative medium, and under imaginative conditions, new and beautiful impressions, is the only temperament that can appreciate a work of art."
4 of 13

"A true artist takes no notice whatsoever of the public. The public to him are non-existent."
5 of 13

"The artist should never try to be popular. Rather the public should be more artistic."
6 of 13

"No great artist ever sees things as they really are. If he did, he would cease to be an artist."
8 of 13

"In a very ugly and sensible age, the arts borrow, not from life, but from each other."
9 of 13

"Art is the most intense mode of individualism that the world has known."
10 of 13

"Art is individualism, and individualism is a disturbing and disintegrating force. There lies its immense value. For what it seeks is to disturb monotony of type, slavery of custom, tyranny of habit, and the reduction of man to the level of a machine."
12 of 13

"I wanted to eat of the fruit of all the trees in the garden of the world ... And so, indeed, I went out, and so I lived. My only mistake was that I confined myself so exclusively to the trees of what seemed to me the sun-lit side of the garden, and shunned the other side for its shadow and its gloom."
13 of 13

Oscar Wilde emerged in late nineteenth century London as the living embodiment of the Aesthetic movement. He won fame as a dramatist, poet and novelist whose ideas on art, beauty and personal freedom formed a formidable challenge to Victorian puritanicalism. At the same time, Wilde attracted public notoriety for his stream of witty aphorisms and his "effeminate" long hair, dandyish clothing and his devotion to flowers. He was halted at the height of his fame when sentenced to three years imprisonment for illegal homosexual activity. Ruined physically and financially, he lived out the final few years of his life in Paris, dying aged just 46. Wilde's star, which today burns brightest within the gay/queer community, has never diminished, however, and his legacy - exemplified by two classics of English literature, the Gothic novel The Picture of Dorian Gray and the stage satire, The Importance of Being Earnest - prevails through screen biographies and countless reinterpretations of his works. But perhaps it was his flair for self-publicity and his oft-quoted witticisms that his name truly endures in the consciousness of the public.

The greatest champion of the credo "art-for-art's-sake", Wilde professed that no "form of government is most suitable for an artist to live under" and that, as far as the true artist was concerned, any "authority over him and his art is ridiculous". Whistler's Impressionistic treatment of Battersea Bridge evoked the hushed atmosphere of the river Thames at dusk; the foggy London skyline peppered with exploding fireworks. It was one of a series of paintings that many, including the critic John Ruskin, saw as an affront to standards in art. In June 1888, following the two men's recent re-acquaintance, Wilde gifted a copy of his new anthology, The Happy Prince, to Ruskin. Wilde's gift was accompanied by a note which read: "There is in you something of prophet or priest, and of poet, and to you the gods gave eloquence such as they have given to none other, so that your message might come to us with the fire of passion, and the marvel of music, making the deaf hear, and the blind see".

One of the tales in the book was called "The Remarkable Rocket", a satire about a delusional toy rocket who believes that his "setting off" will take center stage at a royal marriage. The rocket has not realized that he will be "a mere footnote to the party". As the literary historian Anne Bruder describes it, "When the Rocket begins an exhortation on his superiority to the other fireworks and his importance to the future of the Prince and Princess, he pathetically begins to weep, and thus destroys his ability to be ignited. His fuse wet, he gets tossed onto a trash heap where uninterested children, who do not even watch the explosion, set him off as they walk away. And while the narrator tells us, "But nobody saw him," the Rocket dies swearing, "I knew I should create a great sensation". As Bruder concluded, "The placement of this tale in Wilde's oeuvre and his gifting it to Ruskin [...] was almost certainly an allegorical rendering of his former friend and famous egotist J. M. Whistler".

Whistler's painting prompted Ruskin to accuse the artist of "flinging a pot of paint in the public's face". Whistler's detestation of the critic led to him suing for libel, a lawsuit he won at great expense and which brought him just minor financial retribution. Unfortunately, the legal costs bankrupted the painter. 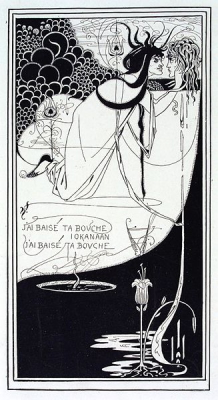 Aubrey Beardsley was a fashionable young British illustrator who had made a name for himself by illustrating a book, Mort d'Arthur, by the medieval poet Malory. The book proved a favorite amongst the Pre-Raphaelites, with whom Wilde was initially affiliated through his admiration of the movement's maverick son, Dante Gabriel Rossetti. Beardsley first met Wilde in 1891. He was somewhat spellbound by the author and even displayed a photograph of Wilde on his fireplace. When Salomé was first published (in English) in February 1893, the Pall Mall Budget magazine commissioned Beardsley for a drawing to illustrate the play's content. However, the magazine rejected the macabre, fantastical image that was based on the play's last scene in which Salomé kisses the lips of John the Baptist's severed head. It was a highly decorative, gruesome, and sexually suggestive vision, which Beardsley thought Wilde would appreciate.

In the April of that year, however, an art publication called The Studio ran the illustration as part of its first edition. Wilde saw the drawing pre-publication and liked it so much he presented Beardsley with an inscribed copy of the earlier printing of the book which read thus: "March '93. For Aubrey. For the only artist who, besides myself, knows what the Dance of the Seven Veils is, and can see that invisible dance". The critic Peter Raby argued that "Beardsley gave the text its first true public and modern performance, placing it firmly within the 1890s - a disturbing framework for the dark elements of cruelty and eroticism, and of the deliberate ambiguity and blurring of gender, which he released from Wilde's play as though he were opening Pandora's box".

As an interesting footnote, Beardsley became art editor of the fashionable magazine The Yellow Book which ran from 1894-97. Promoting the ideas of the Aesthetic movement, the magazine took its name from the "dishonourable" covering under which controversial French novels were hidden from public view (as the British Library notes, it is, in fact, a "yellow book" which corrupts Dorian Gray, that book generally thought to be Joris-Karl Huysmans's decadent 1884 novel A rebours (Against nature)). The British Library records moreover that "when Wilde was arrested in 1895, there were rumours he had been carrying a yellow-bound book. Though this was actually Pierre Louÿs's French novel Aphrodite, a confused crowd thought it was a copy of [the] magazine, and gathered to throw stones at the publishers offices". 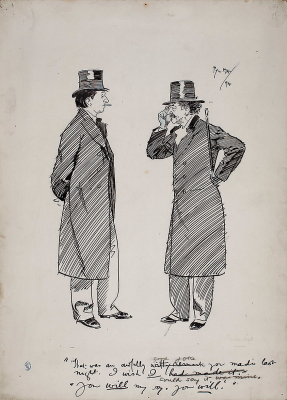 The English satirist Phil May, a member of the Chelsea Arts Club, contributed many caricatures of actors, artists, and writers to London periodicals. His self-assured drawing style and his cutting wit attracted a devoted following with his illustrations published in book collections. His caricature of Wilde and the American painter James Abbott McNeill Whistler was reproduced in Phil May's Sketch-book, first published in 1895. The caption refers to Whistler's repeated accusation that Wilde plagiarized his ideas. May's caption reads: [Wilde]: "That was an awfully good joke you made last night. I wish I could say it was mine". [Whistler]: "You will my boy. You will".

The acerbic Whistler's eagerness to court controversy, and his craving for the limelight, made him and Wilde natural friends and together they fronted the public image of the Aesthetic movement. Twenty-years older, Whistler initially regarded Wilde as a disciple demanding of his master's approval. Indeed, Wilde's editor, Frank Harris, believed that Whistler did more to influence Wilde's wit than any other acquaintance: "Of all the personal influences which went into the moulding of Oscar Wilde's talent, that of Whistler was by far the most important; Whistler taught him the value of wit and the power a consciousness of genius and a knowledge of men lend to the artist".

However, as with many of both men's close friendships, theirs ended in acrimony. Whistler felt increasingly that Wilde, whose reputation was eclipsing his own, had copied his dandyish style of dress and speech (hence the caption in May's caricature). Responding to Whistler's charge of plagiarism, Wilde retorted, "as far as borrowing Mr. Whistler's ideas about art, the only thoroughly original ideas I have ever heard him express have had reference to his own superiority over painters greater than himself". Wilde further opined, "Mr Whistler always spelt art, and we believe still spells it with a capital I". Whistler retorted, "What has Oscar in common with Art? Except that he dines at our tables, and picks from our platters the plums for the pudding he peddles in the provinces". By 1890 the two men's friendship had dissolved entirely with Wilde, ever one to have the last word, basing the murdered artist in his novel The Picture of Dorian Gray on his friend-turned-nemesis, Whistler. Books
websites
articles
video clips
More
Books
The books and articles below constitute a bibliography of the sources used in the writing of this page. These also suggest some accessible resources for further research, especially ones that can be found and purchased via the internet.
biography
written by artist
View more books
websites
articles
View more articles
video clips
More
in pop culture
View more resources
Share
Do more