Photomontage first emerged in the mid-1850s as experimental photographers aspired to create images that could rank alongside fine art. The idea of the composite image was thought to have been first proposed by the French photographer Hippolyte Bayard who wanted to produce a balanced image in which the subject was superimposed on a background that brought the two together in an idealized setting. Since a photograph was regarded as the record of truth, however, his approach attracted controversy amongst the photographic community who did not warm to the blatant misrepresentation of reality.

The first commercial photomontages were produced during the mid-Victorian era when the practice was given the name "combination printing" by Oscar Gustave Rejlander, a self-appointed artist in this new field. Rejlander started working in portraiture, but he also created notorious "erotic" artworks featuring circus models and child prostitutes. His famous Two Ways of Life (1857) combined over thirty images in a single photograph to create a moralistic allegory contrasting a life of sin with one of virtue. Showing two boys being offered guidance by the patriarch, the print initially caused controversy for its partial nudity. That objection notwithstanding, the print was a success and helped secure Rejlander's admission into the Royal Photographic Society of London. 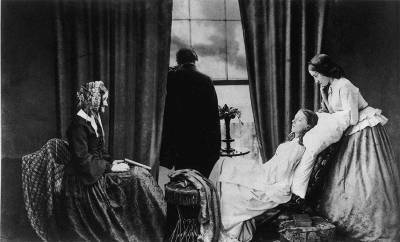 Like Rejlander, Henry Peach Robinson started out in portraiture, and, like Rejlander, he was considered one of the most influential photographers of late nineteenth century. His most famous composite print, Fading Away, depicted a young woman's final moments with her loved ones in attendance. The image belongs to what Robinson called his "Pre-Raphaelite phase" in which he sought to manufacture timeless moments in a gothic setting.

Though Rejlander and Robinson aspired to the status of fine artists, many less distinguished photomontages came to fruition during the same period. These tended to take the form of novelty postcards featuring the wrong head stuck on the wrong human body, or even a human head placed on the body of a creature. By the beginning of World War I, more sober images in Robinson's sentimental/illusionist style gained in commercial popularity as photographers across Europe produced postcards showing soldiers departing for battle with their loved ones waving them off. These postcards, very often hand-tinted, would have an impact on the development of photomontage within the Berlin Dada movement which steered a path away from this false narrative tradition towards something much more self-reflexive. Dada artists are usually credited with pioneering the use of "non-narrative" photomontage. (Not without a little conceit) George Grosz reflected that "When John Heartfield and I invented photomontage in my South End studio at five o'clock on a May morning in 1916, neither of us had any inkling of its great possibilities, nor of the thorny yet successful road it was to take". Hannah Höch, meanwhile, explained how she and her partner Raoul Hausmann came to adopt the idea, not from Heartfield or Grosz, but "from a trick of the official photographers of the Prussian army regiments [who] used to have elaborate oleo-lithographed mounts, representing a group of uniformed men with a barracks or a landscape in the background then inserted photographic portraits of the faces of their customers, generally coloring them later by hand". Though these commercial efforts were intended to create a seamless illusion, Höch used the technique rather to draw attention to the absurdities and inequalities of modern German society.

Photomontage would become a dominant technique within the Berlin Dada movement, redefining the very role of the modern artist (as the Dadaists saw it at least). As Raoul Hausmann said, "We called [the] process 'photomontage,' because it embodied our refusal to play the part of the artist. We regarded ourselves as engineers, and our work as construction: we assembled our work, like a fitter". The art critic Brian Dillon added that the technique established "the aesthetic of liberation, revolution, protest [...] And in the hands of these artists it became intensely ideological, a defence in times of tyranny and a weapon against injustice". The idea of photographic formalism was the central tenet of Constructivism, and as art historian Craig Buckley remarked, while the "beginnings of avant-garde photomontage are commonly traced back to the context of Berlin Dada after World War I [...] the technique was adopted almost simultaneously by constructivist artists and filmmakers in the Soviet Union".

El Lissitzky, Alexander Rodchenko, Gustav Klutis, Valentina Kulagina, and Varvara Stepanova (who defined photomontage in 1928 as "the assemblage of the expressive elements from individual photographs") created photomontages that synthesized images with graphic design to support the Russian Revolution and the new Soviet Government. Constructivist works were inherently propagandist, as exemplified in Rodchenko's posters which, with their bold colors and dynamic geometric design, transformed the art of graphic design into something revolutionary. El Lissitzky's photomontages, which combined his photographs in multi-layered compositions, exemplified a more aesthetic Constructivist approach, while also influencing the New Vision movement, Bauhaus photography, and prominent artists such as László Moholy-Nagy.

Photomontage was valued amongst Surrealists for its ability to create uncanny scenarios that disturbed and provoked by probing the human subconscious. Former Dada artists, such as Max Ernst, carried the technique over into the new movement. Ernst described photomontage as "the systematic exploitation of the accidentally or artificially provoked encounter of two or more foreign realities on a seemingly incongruous level - and the spark of poetry that leaps across the gap as these two realities are brought together". Surrealism also pioneered collaborative photomontage through the cadaver exquis (exquisite corpse) technique whereby the various participants contributed to the piece while remaining unaware of the origins of the previous contribution. Some Surrealists, such as Dora Maar, were known primarily for their photomontage, though many leading Surrealists, including René Magritte, Man Ray, and Salvador Dalí included the technique in their repertoire. Their works also exercised an important international influence, as seen, for instance, in Harue Koga's Sea (1929) which helped pioneer Surrealism in Japan. He too used the collage technique to create what have been called "photomontage paintings".

Cinema - The Montage of Moving Images Between 1899 and 1909 the grammars of cinema entered a chaotic period of experimentation in which filmmakers hurried to test the possibilities of editing individual shots of film together into something more meaningful. Between 1909 and 1919 one D. W. Griffiths almost singlehandedly developed the method of montage that gave rise to the Classical Realist Narrative; known otherwise as the Classical Hollywood Film. A profoundly problematic figure for historians given his supremacist and pious worldview, through films like The Birth of a Nation (1915) he devised a system of montage that was so sophisticated he placed the spectator in the world of a feature length film; side-by-side the heroes and heroines that drive that narrative. With Griffith, the phenomenon of modern cinema-going was duly born.

Just as the modernists had responded to the illusionism of "combination prints", the Dadaists, Constructivists and Surrealists all produced films that challenged the Classical Narrative system. In Russia (and in awe of Griffith's achievements) filmmakers such as Sergei M. Eisenstein and Dziga Vertov experimented with alternative methods of film montage. Eisenstein developed five stages of montage - metric, rhythmic, tonal, over tonal, intellectual - that combined to bring a revolutionary dynamism to filmmaking: "the fact [is] that two film pieces of any kind, placed together, inevitably combine into a new concept, a new quality, arising out of a juxtaposition" stated Eisenstein in his famous treatise on montage The Film Sense. Probably the most famous (and certainly the most notorious) of the early art films was the 17 minute Surrealist masterpiece Un Chien Andalou (1929), by Luis Buñuel and Salvador Dalí. There is no temporal or spatial relationship between scenes with seemingly random and startling set pieces spliced together on the principle of a dream logic. Indeed, the film only touches on the idea of a coherent narrative through the continued presence of the same actors and the somewhat sparse use of motifs (striped objects for instance). By juxtaposing individual scenes, "dreamed up" independently by the two artists, Un Chien Andalou conformed to the idea, popular with Surrealists, of Freudian free-association. Within British Pop Art, experiments with photomontage started as early as 1947 with Eduardo Paolozzi's BUNK! (1947-52), a series of 54 works composed of found or sourced photographs from American magazines. It was however Richard Hamilton's Just What Is It That Makes Today's Homes So Different, So Appealing? (1956), that introduced British Pop to the world. He too used images cut and pasted from American mass media publications and in so doing Hamilton offered an affectionate critique of post-war American consumer society.

The work of Paolozzi and Hamilton highlights the problem of how one classifies photomontage. In America, too, James Rosenquist, and Martha Rosler emerged as leading American Pop artists who experimented with a photomontage/collage technique. Rosenquist's President Elect (1960-61), for instance, combined images of President John F. Kennedy, a slice of cake, and an automobile while Rosler's works often connected found-images of middle-class housewives and interiors as an implicit feminist critique of contemporary American culture. Pop Art highlights the difficulty historians face when they attempt to categorize art generically since, sooner or later, one approach will organically overlap with another (photomontage and collage in this example).

By the 1970s photomontage was taken up by a number of prominent individuals. Artists, including Martha Rosler, Peter Kennard, Linder Sterling, and Barbara Kruger created composite works that gathered under the rubric of social protest and identity politics. Moving into the late-twentieth and early-twenty-first century, new photographic and digital technologies allowed for further innovations. These developments are evident in the conceptual digital photomontages of Andreas Gursky and Jeff Wall. David Hockney, meanwhile, developed photomontages out of Polaroid prints, calling them "joiners", while John Stezaker combined postcards with film stills.

The blended and juxtapositional constituents of photomontage have become time-honoured and omnipresent in the digital age. Many examples of digital photomontage are now designed to celebrate the imagination of the artist. The Spaniard Antonio Mora, for instance, uses images found on blogs and other online sources to create a "pure art" concerned with nothing more than visual effects and aesthetics. More recently, photomontage has become an essential element of multimedia installation, as seen for instance in Kruger's Belief + Doubt (2012) and Lorna Simpson's Unanswerable (2018).

The Important Artists and Works of Photomontage