Pablo Ruiz Picasso was born into a creative family. His father was a painter, and he quickly showed signs of following the same path: his mother claimed that his first word was "piz," a shortened version of lapiz, or pencil, and his father was his first teacher. Picasso began formally studying art at the age of 11. Several paintings from his teenage years still exist, such as First Communion (1895), which is typical in its conventional, if accomplished, academic style. His father groomed the young prodigy to be a great artist by getting Picasso the best education the family could afford and visiting Madrid to see works by Spanish Old Masters. And when the family moved to Barcelona so his father could take up a new post, Picasso continued his art education. 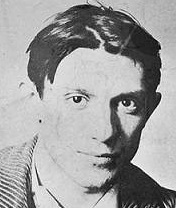 It was in Barcelona that Picasso first matured as a painter. He frequented the Els Quatre Gats, a café popular with bohemians, anarchists, and modernists. And he came to be familiar with Art Nouveau and Symbolism, and artists such as Edvard Munch and Henri Toulouse-Lautrec. It was here that he met Jaime Sabartes, who would go on to be his fiercely loyal secretary in later years. This was his introduction to a cultural avant-garde, in which young artists were encouraged to express themselves.

During the years from 1900 to 1904, Picasso traveled frequently, spending time in Madrid and Paris, in addition to spells in Barcelona. Although he began making sculpture during this time, critics characterize this time as his Blue Period, after the blue/grey palette that dominated his paintings. The mood of the work was also insistently melancholic. One might see the beginnings of this in the artist's sadness over the suicide of Carlos Casegemas, a friend he had met in Barcelona, though the subjects of much of the Blue Period work were drawn from the beggars and prostitutes he encountered in city streets. The Old Guitarist (1903) is a typical example of both the subject matter and the style of this phase. 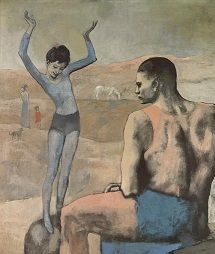 In 1904, Picasso's palette began to brighten, and for a year or more he painted in a style that has been characterized as his Rose Period. He focused on performers and circus figures, switching his palette to various shades of more uplifting reds and pinks. And around 1906, soon after he had met artist Georges Braque, his palette darkened, his forms became heavier and more solid in aspect, and he began to find his way towards Cubism.

In the past critics dated the beginnings of Cubism to his early masterpiece Les Demoiselles d'Avignon (1907). Although that work is now seen as transitional (lacking the radical distortions of his later experiments), it was clearly crucial in his development since it was heavily influenced by African sculpture and ancient Iberian art. It is said to have inspired Braque to paint his own first series of Cubist paintings, and in subsequent years the two would mount one of the most remarkable collaborations in modern painting, sometimes eagerly learning from each other, at other times trying to outdo one another in their fast-paced and competitive race to innovate. They visited each other daily during their formulation of this radical technique, and Picasso described himself and Braque as "two mountaineers, roped together." In their shared vision, multiple perspectives on an object are depicted simultaneously by being fragmented and rearranged in splintered configurations. Form and space became the most crucial elements, and so both artists restricted their palettes to earth tones, in stark contrast with the bright colors used by the Fauves that had preceded them. Picasso would always have an artist or a group he collaborated with, but as Braque biographer Alex Danchev wrote: Picasso's "Braque period" was "the most concentrated and fruitful of his whole career." 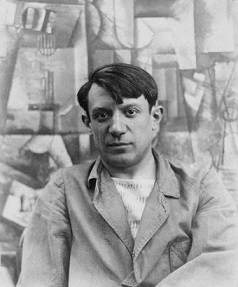 Picasso rejected the label "Cubism," especially when critics began to differentiate between the two key approaches he was said to pursue - Analytic and Synthetic. He saw his body of work as a continuum. But it is beyond doubt that there was a change in his work around 1912. He became less concerned with representing the placement of objects in space than in using shapes and motifs as signs to playfully allude to their presence. He developed the technique of collage, and from Braque he learned the related method of papiers colles, which used cutout pieces of paper in addition to fragments of existing materials. This phase has since come to be known as the "Synthetic" phase of Cubism, due to its reliance on various allusions to an object in order to create the description of it. This approach opened up the possibilities of more decorative and playful compositions, and its versatility encouraged Picasso to continue to utilize it well in the 1920s.

But the artist's dawning interest in ballet also sent his work in new directions around 1916. This was in part prompted by meeting the poet, artist, and filmmaker Jean Cocteau. Through him he met Sergei Diaghilev, and went on to produce numerous set designs for the Ballets Russes.

For some years Picasso had occasionally toyed with classical imagery, and he began to give this free rein in the early 1920s. His figures became heavier and more massive, and he often imagined them against backgrounds of a Mediterranean Golden Age. They have long been associated with the wider conservative trends of Europe's so-called rappel a l'ordre, (return to order), a period of art now known as Interwar Classicism. 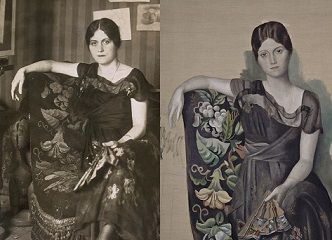 His encounter with Surrealism in the mid 1920s again prompted a change of direction. His work became more expressive, and often violent or erotic. This phase in his work can also be correlated with the period in his personal life when his marriage to dancer Olga Khokhlova began to break down and he began a new relationship with Marie-Therese Walter. Indeed, critics have often noted how changes in style in Picasso's work often go hand in hand with changes in his romantic relationships; his partnership with Khokhlova spanned the years of his interest in dance and, later, his time with Jacqueline Roque is associated with his late phase in which he became preoccupied with his legacy alongside the Old Masters. Picasso frequently painted the women he was in love with, and, as a result, his tumultuous personal life is well represented on canvas. He was known to have kept many mistresses, most famously Eva Gouel, Dora Maar, and Françoise Gilot. He married twice, and had four children, Claude, Paloma, Maia, and Paulo. In the late 1920s he began a collaboration with the sculptor Julio González. This was his most significant creative partnership since he had worked alongside Braque, and it culminated in welded metal sculptures, which were subsequently highly influential.

As the 1930s wore on, political concerns began to cloud Picasso's view, and these would continue to preoccupy him for some time. His disgust at the bombing of civilians in the Basque town of Guernica during the Spanish Civil War prompted him to create the painting Guernica, in 1937. During World War II he stayed in Paris, and the German authorities left him sufficiently unmolested to allow him to continue his work. However, the war did have a huge impact on Picasso, with his Paris painting collection confiscated by Nazis and some of his closest Jewish friends killed. Picasso made works commemorating them - sculptures employing hard, cold materials such as metal, and a particularly violent follow up to Guernica, entitled The Charnel House (1945). Following the war he was also closely involved with the Communist Party, and several major pictures from this period, such as War in Korea (1951), make that new allegiance clear. 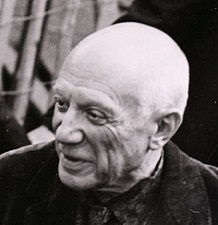 Throughout the 1950s and 1960s, Picasso worked on his own versions of canonical masterpieces by artists such as Nicolas Poussin, Diego Velázquez, and El Greco. In the later years of his life, Picasso sought solace from his celebrity, marrying Jacqueline Rogue in 1961. His later paintings were heavily portrait-based and their palettes nearly garish in hue. Critics have generally considered them inferior to his earlier work, though in recent years they have been more enthusiastically received. He also created many ceramic and bronze sculptures during this later period. He died of a heart attack in the South of France in 1973.

The Legacy of Pablo Picasso Picasso's influence was profound and far-reaching, and remarkably, many periods of his life were influential in their own right. His early Symbolist pieces remain iconic, while innovations in pioneering Cubism established a set of pictorial problems, devices, and approaches, which remained important well into the 1950s. Even after the war, even though the energy in avant-garde art shifted to New York, Picasso remained a titanic figure, and one who could never be ignored. Indeed, even though the Abstract Expressionists could be said to have superseded aspects of Cubism (even while being strongly influenced by him), The Museum of Modern Art in New York has been called "the house that Pablo built," because it has so widely exhibited the artist's work. MoMA's opening exhibition in 1930 included fifteen paintings by Picasso. He was also a part of Alfred Barr's highly influential survey shows Cubism and Abstract Art (1936) and Fantastic Art, Dada, Surrealism (1936-37). Although his influence undoubtedly waned in the 1960s, he had by that time become a pop icon, and the public's fascination with his life story continue to fuel interest in his work.