A watershed moment for the development of Cubism was the posthumous retrospective of Paul Cézanne's work at the Salon d'Automne in 1907. Cézanne's use of generic forms to simplify nature was incredibly influential to both Pablo Picasso and Georges Braque. In the previous year, Picasso was also introduced to non-Western art: seeing Iberian art in Spain, and African-influenced art by Matisse, and at the Trocadero anthropological museum. What drew Picasso to these artistic traditions was their use of an abstract or simplified representation of the human body rather than the naturalistic forms of the European Renaissance tradition. 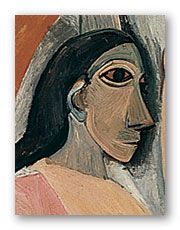 These varying influences can be seen in Picasso's groundbreaking work of 1907, Les Demoiselles d'Avignon, which is considered a work of proto or pre-Cubism. In its radical distortion of figures, its rendering of volumes as fragmented planes, and its subdued palette, this work predicted some of the key characteristics of later Cubism.

Braque, on seeing Picasso's Les Demoiselles at his studio, intensified his similar explorations in simplification of form. He made a series of landscape paintings in the summer of 1908, including Houses at L'Estaque in which trees and mountains were rendered as shaded cubes and pyramids, resembling architectural forms. Cubism was introduced to the public with Braque's one-man exhibition at Daniel-Henry Kahnweiler's gallery on the rue Vignon in November 1908. It was this exhibit that led French art critic Louis Vauxcelles to describe them as "bizarreries cubiques," thus giving the movement its name.

The experiments of Picasso and Braque owe much to Kahnweiler, who was the major supporter of their work. Picasso and Braque were both quite poor in 1907 and Kahnweiler offered to buy their works as they painted them, thus freeing the artists from worrying about pleasing patrons or receiving negative reviews. After the 1908 exhibit, with few exceptions, the two artists exhibited only in Kahnweiler's gallery.

The Cubism of Picasso and Braque

The close collaboration between Picasso and Braque beginning in 1909 was crucial to the style's genesis. The two artists met regularly to discuss their progress, and at times it became hard to distinguish the work of one artist from another (as they liked it). Both were living in the bohemian Montmartre section of Paris in the years before and during World War I, making their collaboration easy.

In 1912, Kahnweiler gave his first public interview on Cubism, no doubt in response to growing public interest in (and some recognition of) the movement. When World War I began, Kahnweiler, as a German, was exiled from France. During the war, Léonce Rosenberg became the main dealer for Cubist art in Paris (including those of the Salon Cubists) with his brother Paul Rosenberg serving as Picasso's dealer during the interwar years.

Though Picasso and Braque returned to Cubist forms periodically throughout their careers and there were some exhibitions of work up until 1925, the two-man movement did not last much beyond World War I. The Salon Cubists, so-called because they showed their works at public exhibits such as the Salon d'Automne, did not work closely with Picasso and Braque but were influenced by their experiments. It was through the work of the Salon Cubists that the movement became widely known to the public in the early 1910s. These artists included Robert Delaunay, Albert Gleizes, Fernand Léger, Juan Gris, Henri Le Fauconnier, Robert de La Fresnaye, and Jean Metzinger. Metzinger and Delaunay, who had been friends at least since 1906, began collaborating with Gleizes as a result of the yearly Salon d'Automne. It was through Gleizes that they met Le Fauconnier who had published Note sur la peinture (1910) in which he praised Picasso and Braque for their "total emancipation" of painting.

These artists exhibited together at the 1911 Salon des Independants, introducing Cubism to the general public. The Independants was a non-juried exhibition where public reaction depended on how and where paintings were hung. The Cubists got control of the hanging committee from the Neo-Impressionists so that their works could be hung together in one room as a coherent school. The paintings created a stir, as Gleizes noted: "While the newspapers sounded the alarm to alert people to the danger, and while appeals were made to the public authorities to do something about it, song writers, satirists and other men of wit and spirit provoked great pleasure among the leisured classes by playing with the word 'cube', discovering that it was a very suitable vehicle for inducing laughter which, as we all know, is the principle characteristic that distinguishes man from the animals."

In addition to showing their works in large exhibitions, the Salon Cubists were also distinct from Picasso and Braque in that they often worked on a large scale, leading one art historian to coin the term 'Epic Cubism' to distinguish their work from the more intimate paintings of Picasso and Braque. While they broke apart objects and bodies into geometric forms like those of Picasso and Braque, the Salon Cubists did not challenge Renaissance conceptions of space to the same extent nor did they embrace the monochromatic color of Analytic Cubism or the collage elements of Synthetic Cubism. At the end of 1911 Gleizes and Metzinger, who lived closely together in the Parisian suburbs, and others in the group began meeting in Puteaux, a suburb where the painter and engraver Jacques Villon and his brother, the sculptor Raymond Duchamp-Villon had their studios (leading to them sometimes being called the Puteaux group). It is likely as a result of these meetings that the main ideas for Metzinger and Gleizes' On Cubism (1912) were formalized; it was the first published statement about the style.

The next year the group also planned the launch of the Salon de la Section d'Or (1912) that would bring together the most radical currents in painting. The term Section d'Or was a name the Salon Cubists adopted to show their attachment to the golden mean, i.e. the belief in order and the importance of mathematical proportions in their works that reflected those in nature. The Section d'Or exhibit was held after the 1912 Salon d'Automne at the Galerie La Boetie. It was at this exhibit that the poet and art critic Guillaume Apollinaire coined the term Orphism to refer to the work of Delaunay. The next year Apollinaire published Aesthetic Meditations: The Cubist Painters (1913). These many exhibits and publications were calculated to make an impact, both in Paris and abroad.

As with the Cubism of Picasso and Braque, the Salon or Section d'Or group did not continue coherently after WWI, having only sporadic exhibits between 1918 and 1925.

The various stages of development in the Cubist style are based on the work of Picasso and Braque rather than on those of the Salon Cubists. The exact names and dates of the stages are debated and continually reframed to this day.

This early phase of the movement came in the wake of the Paul Cézanne retrospective in 1907 when many artists were reintroduced or introduced for the first time to the work of Cézanne, who had been living in Aix-en-Provence in the south of France before his death and had not exhibited in Paris for many years. Several artists who saw the retrospective were influenced by his lack of three-dimensionality, the material quality of his brushwork, and his use of uniform brushstrokes. Braque's Houses at L'Estaque (1908) is a good example of this type of Cubism.

In this phase, Cubism developed in a highly systematic fashion. Later to be known as the Analytic period of the style, it was based on close observation of objects in their background contexts, often showing them from various vantage points. Picasso and Braque restricted their subject matter to the traditional genres of portraiture and still life and also limited their palette to earth tones and muted grays in order to lessen the clarity between the fragmented shapes of figures and objects. Although their works were often similar in appearance, their separate interests showed through over time. Braque tended to show objects exploding out or pulled apart into fragments, while Picasso rendered them magnetized, with attracting forces compelling elements of the pictorial space into the center of the composition. Works in this style include Braque's Violin and Palette (1909) and Picasso's Ma Jolie (1911-12).

Towards the end of this stage of Cubism, Juan Gris began to make contributions to the style: he maintained a sharp clarity to his forms, provided suggestions of a compositional grid, and introduced more color to what had been an austere, monochromatic style.

In 1912 both Picasso and Braque began to introduce foreign elements into their compositions, continuing their experiments with multiple perspectives. Picasso incorporated wall paper that imitated chair caning into Still Life with Chair-Caning (1912), thus initiating Cubist collage, and Braque began to glue newspaper to his canvases, beginning the movement's exploration of papier-colle. In part this may have resulted from the artists' growing discomfort with the radical abstraction of Analytic Cubism, though it could also be argued that these Synthetic experiments touched off an even more radical turn away from Renaissance depictions of space, and towards a more conceptual rendering of objects and figures. Picasso's experiments with sculpture are also included as part of the Synthetic Cubist style as they employ collaged elements.

As a response to the chaos of war, there was a tendency among many French artists to pull back from radical experimentation; this inclination was not unique to Cubism. One art historian has described this stage of Cubism as the "end product of a progressive closing down of possibilities." In Léger's Three Women (1921), for example, the depicted subjects are hard-edged rather than resembling overlapping bits of low-relief sculpture; Léger also did not attempt to show objects from various angles. Crystal Cubism is associated with Salon Cubism as well as with the works of Picasso and Braque. Crystal Cubism is part of the larger trend known as a Return to Order (also known as Interwar Classicism) that was associated with artists in the School of Paris. Cubism spread quickly throughout Europe in the 1910s, as much because of its systematic approach to rendering imagery as for the openness it offered in depicting objects in new ways. Critics were split over whether Cubists were concerned with representing imagery in a more objective manner - revealing more of its essential character - or whether they were principally interested in distortion and abstraction.

The movement lies at the root of a host of early-20th century styles including Constructivism, Futurism, Suprematism, Orphism, and De Stijl. Many important artists went through a Cubist phase in their development, perhaps the most notable of whom was Marcel Duchamp whose notorious Nude Descending a Staircase (1912) garnered much attention and many negative reviews at the 1913 Armory Show in New York City.

The ideas in the movement also fed into more popular phenomena, like Art Deco design and architecture. Later movements such as Minimalism were also influenced by the Cubist use of the grid, and it is difficult to imagine the development of non-representational art without the experiments of the Cubists. Like other paradigm changing artistic movements of 20th-century art, like Dada and Pop, Cubism shook the foundations of traditional artmaking by turning the Renaissance tradition on its head and changing the course of art history with reverberations that continue into the postmodern era.

Important Art and Artists of Cubism