Artworks and Artists of De Stijl Composition A - whose title announces its nonobjective nature by making no reference to anything beyond itself - is a good example of Mondrian's geometric abstraction before it fully matured within the framework of the De Stijl aesthetic. With its rectilinear forms made up of solid, outlined areas of color, the work reflects the artist's experimentation with Schoenmaekers's mathematical theory and his search for a pared-down visual language appropriate to the modern era. While here Mondrian uses blacks and shades of grey, his paintings would later be further reduced, ultimately employing more basic compositions and only solid blocks of primary colors.

Oil on canvas - The National Gallery of Modern and Contemporary Art, Rome This early work employs the signature geometric shapes of the De Stijl aesthetic, yet its layering of shapes and forms, and combination of horizontal, vertical, and diagonal lines--along with the absence of color - reflect a different approach from that of the movement's leading artists, van Doesburg and Mondrian. The work's suggestion of a human figure - accomplished by the arrangement of geometric forms and placement of a cube at the top, possibly representing a head - is also unique in De Stijl art. Mechano-Dancer's evocation of a hybrid man-machine, also implied by its title, suggests the influence of Dada and Italian Futurism. Originally designed in 1918 but not fully realized until 1923, when it incorporated the characteristic De Stijl scheme of primary colors, Red and Blue Chair is one of the canonical works of the movement. Rietveld envisioned a chair that played with and transformed the space around it, consisting of rectilinear volumes, planes, and lines that interact in unique ways, yet manage to avoid intersection. Every color, line, and plane is clearly defined, as if each comprised its own work that just happened to be used for a piece of furniture. The simple assembly Rietveld deployed was quite intentional as well; he built the chair out of standard lumber sizes available at the time, reflecting his goal of realizing a piece of furniture that could be mass-produced as opposed to hand-crafted. Emphasizing its manmade quality, Red and Blue Chair also notably avoids the use of natural form, which furniture designers tend to favor in order to emphasize the idea of physical comfort and convenience.

First introduced in 1924, van Doesburg's Counter Compositions - his signature works - embody the artist's wish to move beyond the confines of De Stijl with his introduction of Elementarism. While van Doesburg continued to make use of horizontal and vertical lines, he now prioritized the diagonal line; he described Elementarism as "based on the neutralization of positive and negative directions by the diagonal and, as far as color is concerned, by the dissonant. Equilibrated relations are not an ultimate result." The titles of his Counter Compositions refer to the fact that the lines of the compositions are at a 45-degree angle to the sides of the picture rather than parallel to them, resulting in a newly energized relationship between the composition and format of the canvas. As in the present example, he repeatedly ventured beyond the three primary colors, including a triangle of grey in addition to the primary colors, white, and black. At the time he painted this composition, De Stijl was finding its own unique voice; paintings, furniture designs, and buildings produced by those associated with the movement communicated how lines and colors should interact, and how a work's appearance is just as essential as its function. The Rietveld Schröder House is an important precursor to the Bauhaus-inspired International Style, as well as the only building designed in complete accordance with the De Stijl aesthetic. The house was commissioned in 1924 by Truus Schröder-Schrader, who intended for the new home to be grand and open ("without walls"), a veritable manifesto for how an independent modern woman should live her life. Featuring the typical De Stijl palette of primary colors, black, and white, the building emphasizes its architectural elements - slabs, posts, and beams - reflecting the movement's emphasis on form, construction, and function in its architecture and design. In other ways, too, the design represents a major departure from architectural convention and precedent. Inside, the rooms are constructed as movable entities with portable walls. In addition, Rietveld's design makes no attempt to interact with any of the surrounding buildings or roadways, suggesting its presence as an isolated structure focusing inward instead of outward. 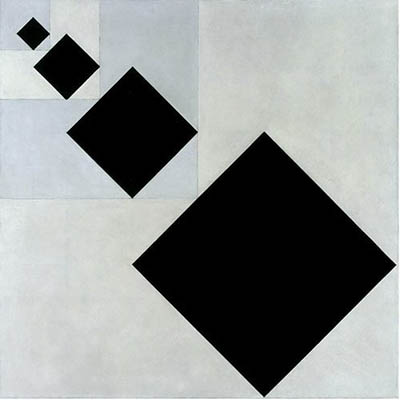 Made close to the end of van Doesburg's life, Arithmetic Composition reflects the artist's experimentation with abstract geometric shapes within a diagonal composition, resulting in a dimensional plane that would not have the same visual effect had the blocks been positioned vertically or horizontally. The work's diagonal configuration, combination of pure positive and negative space (black forms against white background), and incorporation of a curious backward "L" in the upper left corner, which consumes one block, create a sense of movement, making the shapes appear as if they are alternately moving toward and away from the viewer. However, unlike Mondrian's characteristic vertical-and-horizontal paintings, which lend themselves to the suggestion of figuration, van Doesburg here creates an abstract artwork totally devoid of the possibility of representation.