Early on I was very involved with the notion of the painting as an object and tended to attack that idea from different directions.

One of the crucial problems in art is the business of 'meaning it.' If you are a painter, meaning the paintings you make; if you are an observer, meaning what you see. It is very difficult for us to mean what we say or do. We would like to, but society makes this very hard for us to succeed in doing.

One assumes that one's relationship to the work is the correct or only possible one. But with a slight re-emphasis of elements, one finds that one can behave very differently toward it, see it in a different way. I tend to focus upon a relationship between oneself and a thing that is flexible, that can be one thing at one time and something else at another time. I find it interesting, although it may not be very reassuring.

Born in 1930 in Augusta, Georgia, Jasper Johns grew up in rural South Carolina and lived with his paternal grandparents after his parents divorced when he was only a toddler. The paintings of his deceased grandmother hung in his grandfather's house, where he lived until the age of nine, and provided his only exposure to art in his childhood. Johns began drawing at a very young age, with a vague intention of wanting to become an artist, but only pursued an official art education in college. He described his childhood desire to become an artist, stating, "I really didn't know what that meant. I think I thought it meant that I would be in a situation different than the one that I was in." Johns moved in with his Aunt Gladys for a few years in his adolescence during which she taught him, and two other students, in a one-room schoolhouse. Eventually Johns reunited with his re-married mother and graduated as the valedictorian of his high school class in Sumter, South Carolina.

After high school, Johns spent three semesters at the University of South Carolina, starting in 1947. Urged by his teachers to study in New York, he moved north and spent one semester at the Parsons School of Design in 1948. However, Parsons was not the ideal fit for Johns, and he left the school, rendering him eligible for the draft. In 1951, he was drafted into the army and spent two years in service during the Korean War at Fort Jackson, South Carolina, and in Sendai, Japan. 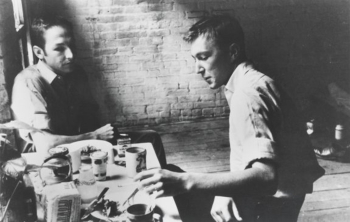 Upon returning to New York after an honorable discharge from the army in 1953, Johns met the young artist Robert Rauschenberg, who ushered him into the art scene. The two artists shared an intense relationship, both romantic and artistic, from 1954 to 1961. Johns noted that he "learned what an artist was from watching [Rauschenberg]." The two artists eventually lived together, had neighboring studio spaces, and, when not many others were interested in their work, became each other's audience. Through their constant contact, they deeply influenced each other's artwork, exchanging ideas and techniques that broke from the then-dominant style of Abstract Expressionism. Both were interested in collage and subverting the existentialist and psychological rhetoric surrounding the then-dominant New York School of painting. 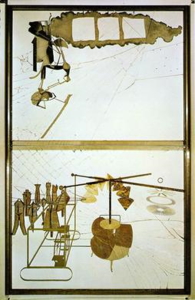 It was during this time that Johns began painting his American flag paintings and targets, using a method that combined bits of newspaper and scraps of fabric on paper and canvas and covered with encaustic paint (pigment mixed with wax). These experiments combined Dadaist gestures and presaged aspects of Minimalism, Pop, and Conceptual Art.

Rauschenberg introduced Johns to composer John Cage and choreographer Merce Cunningham, as well as to the work of European Dadaist Marcel Duchamp. In 1958, Johns and Rauschenberg traveled to see the collection of Duchamp's work at the Philadelphia Museum, where the elder Dada artist's readymades had a profound impact on both of the artists. In 1959, Duchamp himself visited Johns's studio, forming a direct connection between the earlier 20th-century avant-garde and the newest generation of American artists. Through these introductions, Johns's artistic practice expanded as he incorporated new methods into his own work.

Although he had only exhibited his painting Green Target (1955) in a group show at the Jewish Museum in 1957, Johns received his first solo exhibition in 1958, after Rauschenberg introduced him to the burgeoning, influential gallerist Leo Castelli. The solo show featured Johns's groundbreaking painting Flag (1954-5), as well as other previously unseen works from the previous few years. According to Johns, the idea for Flag came to him one night in 1954, when he dreamt about painting a large American flag. He brought the dream to life the following day, and eventually he completed several paintings of the same subject, all of which were included in the Castelli Gallery show. The paintings captivated some, including artist Allan Kaprow, and puzzled others. Though the surfaces of these paintings contained the drip-like qualities of the gestural canvases of Willem de Kooning and Jackson Pollock, the emotional expressionism of those paintings were missing. Despite some reservations, though, Johns's first solo exhibition received monumentally positive critical attention and catapulted Johns into the public eye. Alfred Barr, the director of the The Museum of Modern Art, bought three paintings for the museum, which was essentially unheard of for a young, unknown artist.

As the Pop Art movement grew around him, Johns left behind the colorful paintings filled with familiar gestures and images and turned to a darker palette. Some critics attribute the shift away from color and toward the grays, blacks, and whites that dominate many of his canvases from the early 1960s to the rocky end of his relationship with Rauschenberg. Although they did not move out of their New York studio spaces until 1961, their relationship was already strained by 1959. That year Rauschenberg acquired a studio space in Florida, and two years later, Johns took a studio on Edisto Island in South Carolina. Although they still spent some time together in New York, both increasingly went their separate ways.

The end of such an influential and formative relationship had a huge emotional impact on Johns, and he immersed himself in his work as well as the linguistic philosophy of Ludwig Wittgenstein and the poetry of Hart Crane. In 1963, he noted that he "had the sense of arriving at a point where there was no place to stand." Despite his unsureness, he continued to expand the focus and ambiguous meanings of his works. During this time, he was involved with the Merce Cunningham Dance Company and served as the artistic director from 1967 through 1980. In 1968, Johns designed the set decor for Walkaround Time, taking cues from Duchamp's The Large Glass (The Bride Stripped Bare by Her Bachelors, Even) (1915-23). Starting in 1960, he began a long-lasting, working relationship with Tatyana Grosman at Universal Limited Art Editions (ULAE), where he created over 120 prints over the decade. Many of his prints echoed the subjects of his paintings, while others expanded his visual repertoire, but all formed a critical dialogue with the rest of his oeuvre. During the 1960s, he also began to further integrate physical, sculptural elements into his paintings, a practice inherited from Duchamp's readymades and Rauschenberg's combines.

After his Edisto Island studio burned down in 1968, Johns split his time between New York City, the Caribbean island of St. Martin, and Stony Point, New York, on Long Island; he bought studios at the latter two sites in the early 1970s. During this period, Johns introduced the use of the motif of crosshatching, or line clusters, into his repertoire, and this style dominated his output through the early 1980s. Throughout the 1980s and 1990s, Johns's work took a more introspective turn as he included specifically autobiographical content in his work. Although, as Johns slyly pointed out, "There is a period in which I began to use images from my life, but everything you use is from your life," suggesting that there had always been an autobiographical element to his work.

Johns became increasingly more reclusive in the decades after his break from Rauschenberg, almost never giving interviews, and maintaining a very quiet public persona; however, he continued to have close contact with a select few of the art world's insiders. Architect Philip Johnson designed the entertainment center that frames a wall in Johns's St. Martin studio, while the former Senior Consultant for Modern and Contemporary Art at the Metropolitan Museum, Nan Rosenthal helped Johns name his Catenary series (1999) when she and her husband visited Johns in that same tropical studio in the late 1990s. He created his most recent series of prints with ULAE in 2011, still experimenting with many recurring motifs in varying mediums.

Johns made headlines again in August 2013, after his studio assistant from 1988 to 2012, James Meyer, was charged with the theft of six-and-a-half-million dollars worth of art from a folder of unfinished works that Johns had prohibited from being sold. Meyer absconded with the 22 works from Johns's studio in Sharon, Connecticut, to sell them through an unidentified gallery in New York, claiming they were gifts from Johns. Johns did not comment on the theft, but he did fire Meyer shortly after discovering the missing works. Johns currently splits his time between his studios in Sharon, Connecticut, where he moved in the 1990s, and St. Martin, and is presently represented by the Matthew Marks Gallery in New York.

The Legacy of Jasper Johns 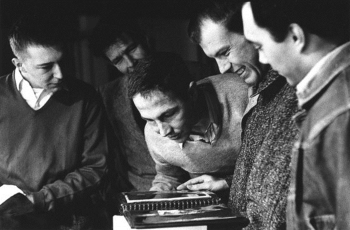 As part of the Neo-Dada movement, Johns bridged the aesthetic gap between Abstract Expressionism and Pop Art during the late 1950s, but to this day, he continues to expand his subjects, materials, and styles. Pop artists, like Andy Warhol and James Rosenquist, benefitted from Johns's groundbreaking turn to the realm of culture, presenting everyday objects and mass-produced goods as an acceptable subject matter for fine art. Through his exploration of the mutable meanings of images and symbols, Johns also paved the way for Conceptual Art in the 1960s. In his collaborations with performance artists like Merce Cunningham and Allan Kaprow, Johns's expanded artistic practice helped usher in movements and groups like Fluxus, Body Art, and the Performance Art of the 1960s and 1970s. While Pop artists directly inherited Johns's representation of the outside world, postmodernism's aesthetic of bricolage is heir to his interest in appropriation, the multiplicity of meanings, and semiotic play. Ultimately, Johns and his Neo-Dada contemporaries shifted the focus of the American avant-garde, heralding the experimentation and viewer interaction that would come to dominate the art of the latter half of the twentieth century.