Symbolism grew out of and was codified in the works of the writers Gustave Kahn and Jean Moréas, who first used the term "Symbolism" in 1886. These writers rejected Émile Zola's Naturalism and favored the subjectivity of the poets Stéphane Mallarmé and Paul Verlaine, who both exercised great influence. Mallarmé hosted Symbolist receptions every Tuesday in his apartment; he was friends with many Symbolist artists including Paul Gauguin, James Abbott McNeill Whistler, Odilon Redon, and Edvard Munch.

Symbolism followed Impressionism chronologically, but it was the antithesis of it, as the emphasis was on the meaning behind the shapes and colors. It did, however, echo the sentiments of the Post-Impressionists Vincent Van Gogh and Paul Gauguin who both lamented the spiritual decline of the modern world. Elements of Symbolism appeared in their works, but the mainstream Symbolists showed greater concern for the interior life rather than external reality. Symbolism in the visual arts had its sources in early-19th-century Romanticism's emphasis on the imagination, rather than reason, and the themes first evident in the poet Charles Baudelaire's Les Fleurs du Mal (1857). Additional sources include the personal visions of painter and poet William Blake, the aestheticism of the Pre-Raphaelite Brotherhood in England, and the poetic, allegorical, moody dream worlds created by Edward Burne-Jones, Dante Gabriel Rosetti, and Pierre Puvis de Chavannes.

Symbolism was in many ways a reaction against the moralism, rationalism, and materialism of the 1880s. This fin-de-siècle period was a period of malaise - a sickness of dissatisfaction. Artists felt a need to go beyond naturalism in art, and like other forms of art and entertainment at the time, such as ballet and the cabaret, Symbolism served as a means of escape.

An offshoot of the literary Symbolism that influenced visual art was the field of art criticism, particularly that of Albert Aurier. In 1891 he wrote, in what became essentially a Symbolist manifesto, that art should be
1) Idéiste (Ideative) ... expressing an idea
2) Symbolist since it expresses that idea through form
3) Synthetic since it expresses those forms and signs in a way that is generally understandable
4) Subjective since the object ... is only an indication of an idea perceived by the subject
5) and as a result it will also be Decorative ... since decorative painting is at once an art that is synthetic, symbolist, and ideative.

The period in which the Symbolists worked was marked by confusion regarding moral, social, religious, and intellectual attitudes. The world was expanding beyond European norms; socialism no longer consisted of the benevolent intentions with which it set out. The relationship between love and marriage was being questioned, as was religion. Artists in particular felt that they were isolated and separate from the bourgeoisie. Yet the idea of the spiritual was very important in the development of Symbolism and reflected the anti-materialist philosophies that were concerned with mysticism (a direct connection and unity with the ultimate reality). An interest in the occult was related to this concept, as was a taste for the morbid and perverse, as this period is often described as one of "decadence" (a period of artistic or moral decline as seen in the preference for the artificial over the natural - and by extension, the idea that even humanity was in decline). English writer Oscar Wilde's works and the French writer Joris-Karl Huysman's À Rebours (Against Nature) (1884), as well as the art of many of the Symbolists, reflect this decadence.

The Symbolist artists (and writers) emphasized the idea of art for art's sake in that they were, for the most part, against the utilitarian applications for art (that is, different from the Art Nouveau artists) and also believed that art did not have to relate to everyday experience.

Synthetism, in particular, is necessary for an understanding of Symbolist aesthetics. Artists that practiced Synthetism combined elements from the real world or borrowed from other works of art or forms of art to create new realities. For example, among the tendencies of the Symbolists was the interest in assimilating music into art; this idea was influenced by the philosopher Arthur Schopenhauer who conceived of music as an art form that communicated its meaning directly. The visual artists emulated this characteristic of music. They also used musical methods of organizing compositions, such as the use of leitmotifs - repeating elements that unify the work. Symbolist artists were particularly interested in the music of Richard Wagner, who believed in the spiritual forces in music and envisioned a sweeping unification of the arts. Thus, whether visual or audial, the Symbolists attempted to put inarticulate experience into some kind of apprehensible sensory form.

Art Nouveau is considered a subspecies of Symbolism. There is a great deal of overlap in Art Nouveau and Symbolist subject matter (for instance in the decadent themes of the work of Aubrey Beardsley), but Art Nouveau is much more specifically an ornamental style based on organic form and applied to all forms of art, that is, to any object that can be made "artistic," e.g. jewelry, furniture, etc. It is difficult to trace its origin, but most scholars agree that it began in Belgium with the work of Victor Horta. However, the style quickly became international. Art Nouveau's purpose was to create an aesthetic that could be applied to all art forms and therefore could exist in harmony with the needs of the machine age and the modern world.

Most scholars refer to Symbolism in the visual arts as an attitude toward subject matter rather than a movement, as it was more clearly in literature. Most late-19th-century Symbolist artists experienced the sociopolitical and moral upheaval that was prevalent at the time, resulting in personal, spiritual, mystical, and oftentimes obscure symbols and subjects relating to the perceived decadence of the period. The works of artists from many countries shared in this vision to varying degrees and arising from various visual sources. We begin with France, where the term 'Symbolism' was first used to describe this phenomenon, and where the aesthetic was first codified.

The two most notable Symbolist artists in France were Gustave Moreau and Odilon Redon. Moreau looked toward the Romantic artists such as Eugène Delacroix and the exotic in general. Redon was also influenced by the Romantics in his creation of fantasy dream worlds, but also by Francisco Goya, which accounts for the disquieting effect of his work. 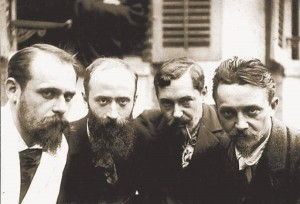 The Nabis (from the Hebrew and Arabic term for "prophets," and by extension, the artist as the "seer") were a Symbolist group founded by Paul Sérusier in 1889 and based on his 1888 painting The Talisman. Although they did not ascribe to the same religious or political views as other Symbolists, the Nabis wanted to be in touch with a higher power; they believed that the artist had the role of a high priest who has the power to reveal the invisible. Their style grew more out of the work of Paul Gauguin, manifested in flatness and stylization, although the subject matter is different, focusing on domestic interiors, as in the case of Édouard Vuillard and Pierre Bonnard. Many of the Nabis artists published in the Symbolist review La Revue Blanche alongside their literary counterparts.

The Rosicrucians were a group of artists headed by the writer Sar Joséphin Péladan, who followed the occult beliefs of the supposed 15th-century visionary Christian Rosenkreuz. They rejected the materialism of the age, and they revived Catholic and Renaissance art, but with mystical, occult overtones. Art for this group was an initiation into religious revelation. The works they produced took the form of mystical allegories, but were stylistically more traditional. The artists Charles Filiger, Armand Point, and Marcellin Desboutin were associated with this Symbolist group, and exhibited in the Paris Salons of the Rose and Croix from 1892 until 1897. These salons were significant in that they highlighted the work of a number of artists from countries other than France.

In Belgium, the two most significant artists were Fernand Khnopff, in whose work a certain level of perversity persists, and the more idiosyncratic and less literary James Ensor, who investigated the symbolism of masks.

Symbolism in Other Countries

In Switzerland, Arnold Böcklin created his "mood landscapes," synthesizing the images from his imagination. His countryman Ferdinand Hodler produced works, such as his Night (1896) and Day (1899), which are characterized by more illusionistic and modeled figures as well as the use of personifications and allegories, rather than symbols as such - although the postures and gestures of his figures do seem to symbolize states of being. In Italy, Giovanni Segantini created mystical visions of the Swiss Alps. An important, if short-lived, group of Symbolist artists came from Holland, including Jan Toorop and Johan Thorn Prikker, who both created archetypal Symbolist pictures. Russian Symbolist artists, such as Leon Bakst, contributed designs for the stage. Examples from the United States included Arthur B. Davies and Maurice Prendergast, who only partially shared in any Symbolist vision, turning as well to other styles, and Alfred Pinkham Ryder, who, although he painted mystic, moody allegories, is usually considered an idiosyncratic artist, not associated with any particular group.

Later Symbolist painting is best exemplified in the works of Gustav Klimt and Edvard Munch. The former's work represents more of a culmination of art prior to the effects of World War I, while the latter's work was and continued to be considered modern throughout his career.

The Symbolism of Gustav Klimt

In Austria, Symbolism is best represented by the work of Gustav Klimt (who was also associated with Art Nouveau), the progressive artist who entered the international Symbolist arena in 1897 by founding the Viennese Secession group. This move entailed a rejection of the salon system and other academic organizations in order to further the modern, more abstract direction, which also entailed more controversial content that mirrored Freud's recent findings. In fact, many historians have commented upon the rapid internationalization of the Art Nouveau style as helping to supplant that of the Symbolists. In view of the eclecticism of his multiple sources, his work has been described as the "last fruits of the Symbolist harvest." His contribution to Symbolism was that many of his works, though Symbolist in subject matter, aimed to unite the arts and crafts in a way similar to that of the Art Nouveau aesthetic, but different from the other Symbolist artists who were more interested in "art for art's sake."

The Berlin Secession in Germany was more conservative than that of Austria, although it did mount an exhibition of the more avant-garde work of the painter from Norway Edvard Munch. Unlike many of the other Symbolists, Munch remained a prolific, modern, and influential painter throughout his life. As one critic has written regarding Munch's work: "long before it was enunciated elsewhere, he embodied the doctrine that the modern artist puts himself personally at risk in his art - that in giving life to his creations, he necessarily risks his own." Munch's work is Symbolist in that the meanings are derived from the colors and forms; his work goes beyond that of other Symbolists in that it is more formally expressive and uses figures' postures and gestures to consistently produce new meanings.

Later Symbolist ideas appear in the work of Expressionist artist Oskar Kokoschka in works such as The Bride of the Wind (1914), where he draws upon the well-worn symbol of two lovers in a boat. Even the young Pablo Picasso during his Blue and Rose Periods is essentially a Symbolist, when he seizes upon Symbolist subjects such as the clown as a symbol of the outsider.

However, in the years leading up to World War I, there was growing dissatisfaction with the over-refinement and obscurities of Symbolism, as many artists desired to move in the direction of the raw and "primitive," in the hopes of bringing a new world into being - even if war was part of the answer.

Important Art and Artists of Symbolism