The Bauhaus, named after a German word meaning "house of building", was founded in 1919 in Weimar, Germany by the architect Walter Gropius. In 1915 he had taken over the Grand-Ducal Saxon School of Arts and Crafts, and it was through the merger of this institution four years later with the Weimar Academy of Fine Art that the radical new design school was formed. In conceptual terms, the Bauhaus emerged out of late-19th-century desires to reunite fine and applied art, to push back against the mechanization of creativity, and to reform education. At the same time, the development of Russian Constructivism in the 1910s provided a more immediate and stylistically apposite precedent for the Bauhaus's merging of artistic and technical design. When the Bauhaus opened its doors in 1920, however, it was a sign of its debt to the aesthetic fashions of the previous decades it took up residence in the former sculpture studio of the Grand-Ducal Saxon School, designed in the Art Nouveau style by the school's penultimate director Henry van de Velde.

Gropius called for the school to show a new respect for craft and practical technique, suggesting a return to the attitudes towards art and craft that had characterized the medieval age. He envisioned the Bauhaus as encompassing the full totality of artistic media, including fine art, industrial design, graphic design, typography, interior design, and architecture. Central to the school's approach was its original and influential curriculum. This was characterized by Gropius as a wheel made up of concentric rings, with the outer ring representing the vorkurs, a six-month preliminary or 'basic course', initiated by Johannes Itten, which concentrated on the fundamental aspects of design, in particular the contrasting properties of various forms, colors and materials. The two middle rings represented two intermediary three-year courses, the formlehre, which focused on problems related to form, and the werklehre, a programme of practical, workshop-based instruction oriented around technical crafts and skills. These classes emphasized functionalism, in particular the use of simple geometric forms that could be reproduced with ease, a conceptual lynchpin of modernist architecture and design across the decades to come. At the center of the wheel were courses specializing in building construction, teaching students the essentials of architectural design, engineering and construction, though with an emphasis on personal craft and workmanship that was felt to have been lost in modern building processes. A key aim of the pedagogical approach, one which applied across all courses, was to eliminate competitive tendencies, to foster not only individual creativity but also a sense of community and shared purpose.

Responsible for the design and delivery of this program were the fabulously talented faculty that Gropius had attracted to Weimar. The avant-garde painters Johannes Itten and Lyonel Feininger, and the sculptor Gerhard Marcks, were among Gropius's first appointments. Itten was particularly important to the school's early ethos: with his background in Expressionism, he was responsible for much of the initial emphasis on romantic medievalism that defined the Bauhaus, in particular the preliminary vorkurs, which he had designed. Famously, his Expressionist and esoteric tendencies put him at odds with Gropius's scientific, sociologically-minded approach, and the two soon came to blows. By 1923, Itten had left, to be replaced by László Moholy-Nagy, a more natural kindred spirit for Gropius; Moholy-Nagy refashioned the vorkurs into a program that embraced technology, and the social function of art. Nonetheless, the Bauhaus retained a mixture of aesthetic influences across the brief course of its existence. Though figures such as Moholy-Nagy are now associated to some extent with the technological ethos of Constructivism, other important early appointments included Expressionist and Expressionist-influenced painters such as Wassily Kandinsky and Paul Klee. They also included artists working across a range of media, from sculpture to choreography, including Georg Muche and Oskar Schlemmer.

The Bauhaus in Dessau 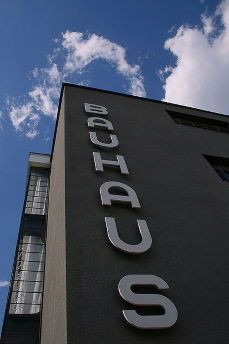 In 1925, the Bauhaus moved to the German industrial town of Dessau, initiating its most fruitful period of activity. Gropius designed a new building for the school which has since come to be seen not only as the Bauhaus's spiritual talisman, but also as a landmark of modern, functionalist architecture. It was also here that the school finally created a department of architecture, something that had been conspicuously lacking in its previous incarnation. However, by 1928 Gropius was worn down by his work, and by increasing battles with the school's critics, including conservative elements in German culture. He stood down, turning over the helm to the Swiss architect Hannes Meyer. Meyer, who headed up the architecture department, was an active communist, and incorporated his political ideas into student organizations and teaching programs. The school continued to grow in strength, but criticism of Meyer's Marxism grew, and he was dismissed as director in 1930. After local elections brought the Nazis to power in Dessau in 1932, the school was again closed and relocated, this time to Berlin, where it would see out the final year of its existence.

In Berlin, the Bauhaus briefly survived under the direction of the architect Ludwig Mies van der Rohe, a famous advocate of functionalist architecture latterly associated, like Gropius, with the so-called International Style. Mies van der Rohe struggled with far poorer resources than his predecessors had enjoyed, however, and with a faculty that had been stripped of many of its brightest stars. He attempted to extricate politics from the school's curriculum, but this brief rebranding effort was unsuccessful, and when the Nazis came to power nationally in 1933, the school was closed indefinitely under intense political pressure and threats. In the decades following its closure, the influence of the Bauhaus would travel as far as its former faculty members, many of whom were forced to flee Europe as the stultifying effects of Fascism took hold. After his relocation to the United States in 1937, Gropius taught at the Graduate School of Design at Harvard University, and was seen as vital in introducing International Style architecture to America and the Anglophone world. So too was Mies van der Rohe, who arrived in the U.S.A in the same year as Gropius, becoming Director of the College of Architecture, Planning, and Design at the Illinois Institute of Technology. Four years earlier, Josef Albers had been appointed head of the painting programme at the legendary Black Mountain College in North Carolina, where his students included Robert Rauschenberg and Cy Twombly. After his own flight from Germany in 1933, the Jewish-born Hungarian László Moholy-Nagy formed what later became the Institute of Design in Chicago.

In the years following the Second World War, the national legacy of the Bauhaus was also revived, through the formation of the Hochschule für Gestaltung in Ulm in 1953. This school was in many ways the spiritual successor of the Bauhaus, with former Bauhaus student Max Bill appointed as its first rector. Bill, Moholy-Nagy, and Albers were especially important in adapting the Bauhaus philosophy to a new era: Moholy-Nagy and Albers refashioned it into one more suitable to a modern research university operating in a market-oriented culture, while Bill played a significant role in spreading geometric abstraction throughout the world in the form of Concrete Art, a successor movement to Constructivism.

Important Art and Artists of Bauhaus