Henri Matisse is widely regarded as the greatest colorist of the 20th century..
Read More About Henri Matisse 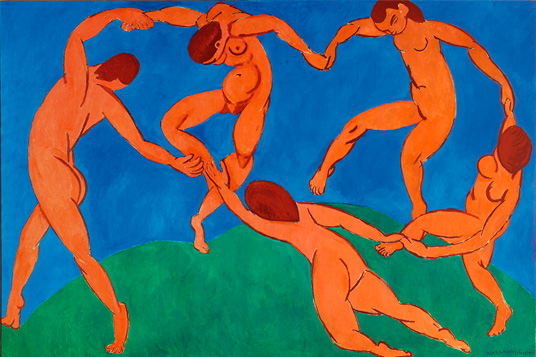 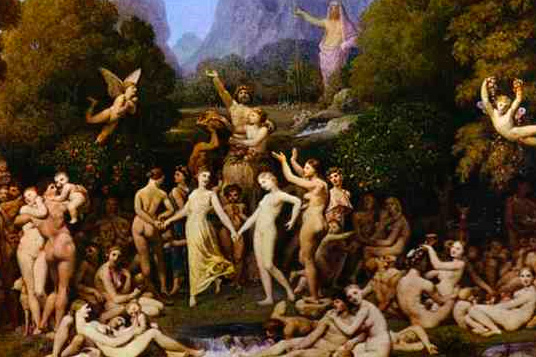 The image of ringed dancers is typical of the pastoral genre. They are an important presence in Carracci's Reciprico Amore, which, like Ingres' The Golden Age, was undoubtedly a source for Le Bonheur de Vivre. In Carracci's picture, the dance takes place in the background of the scene, and trees and figures are arranged in the foreground as repoussoir elements - elements which lead the eye towards the center. Carracci's picture is also a meticulous catalogue of incident and anecdote, with each of the more prominent figures individualised. By contrast, the figures in Matisse's Dance II occupy only the foreground of the picture, and by rendering them in red-orange he establishes a clash both with the grassy platform on which they twirl, and with the blue of the sky behind them. Since the colors brighten and energise each other they add liveliness to the dancers, who do not obey gravity and instead seem to float. The tint and shade fluctuations within the background colors also evoke flickering light adding further buoyancy. Critics have noted, with regard to Le Bonheur de Vivre, that the eye has difficulty settling on the figures; in Dance II, Matisse seems to have tried to exaggerate that effect. The eye cannot take in the scale of the motif, and is left to swim and reel around the dancing figures, even while it is disorientated by the clash of blue, green and orange. However this partial disorientation is tempered by parallel undulating curves in both ground shapes and entwined figures creating rhythmic unity in the chaos. This playful abstraction of form in this closed space intensifies the evocation of the most primal joy and transcends previous depictions of this theme.
In addition, one might find sources for Matisse's approach in the flat patterns on Greek vases, but Matisse's Dance II deliberately offers little of the harmony that such decorative objects conventionally achieve.
The Classical Tradition Back to Matisse Comparison Page