Gustave Courbet was the father of Realism in 19th century painting.. 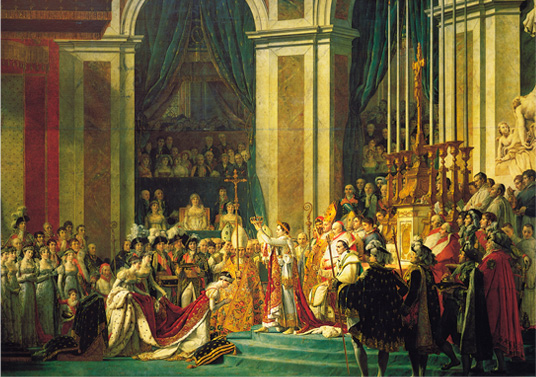 Jacques Louis David, The Consecration of the Emperor Napoleon and the Coronation of Empress Joséphine on December 2, 1804, 1806-7

Both of these pictures are large in size - Courbet's 22ft long, and David's 32ft - and the artists have employed this scale not only to give themselves the space to clearly depict the various onlookers, but also to lend a sense of gravity and importance to the events. David, in 1804, had just become court painter to Napoleon, and no doubt his master expected such a scale; but viewers of Courbet's picture, in 1850, were less sure that a country funeral warranted such attention, and hence the picture drew controversy. Courbet had taken ordinary people that were seen as worthy subject matter only in small and humble genre paintings, and shown them in the grand scale reserved for nobility and religious figures. Might he even be satirizing the nobles and high clergy that appear in pictures like David's? Ultimately, however, this re-contextualization of ordinary individuals created not just a new approach to art, but also expressed a new political thrust to put ordinary citizens into a place of power and control.
Back to Courbet Comparison Page Composition

The Image Comparison Learning Tool was developed for The Art Story Foundation by Stephen Knudsen and Morgan Falconer. Please visit www.SteveKnudsen.com for full information on this methodology and for further information on The Beardsley ICU System.
IMAGE COMPARISONS
Gustave Courbet