Andy was the third child born to Czechoslovakian immigrant parents, Ondrej and Ulja (Julia) Warhola, in a working class neighborhood of Pittsburgh. He had two older brothers, John and Paul. As a child, Andy was smart and creative. His mother, a casual artist herself, encouraged his artistic urges by giving him his first camera at nine years old. Warhol was known to suffer from a nervous disorder that would frequently keep him at home, and, during these long periods, he would listen to the radio and collect pictures of movie stars around his bed. It was this exposure to current events at a young age that he later said shaped his obsession with pop culture and celebrities. When he was 14, his father passed away, leaving the family money to be specifically used towards higher learning for one of the boys. It was decided by the family that Andy would benefit the most from a college education.

After graduating from high school at the age of 16 in 1945, Warhol attended Carnegie Institute of Technology (now Carnegie Mellon University), where he received formal training in pictorial design. Shortly after graduating, in 1949, he moved to New York City, where he worked as a commercial illustrator. His first project was for Glamour magazine for an article entitled, "Success is a Job in New York." Throughout the 1950s Warhol continued his successful career in commercial illustration, working for several well-known magazines, such as Vogue, Harper's Bazaar and The New Yorker. He also produced advertising and window displays for local New York retailers. His work with I. Miller & Sons, for which his whimsical blotted line advertisements were particularly noticed, gained him some local notoriety, even winning several awards from the Art Director's Club and the American Institute of Graphic Arts.

In the early 1950s, Andy shortened his name from Warhola to Warhol, and decided to strike out on his own as a serious artist. His experience and expertise in commercial art, combined with his immersion in American popular culture, influenced his most notable work. In 1952, he exhibited Fifteen Drawings Based on the Writings of Truman Capote in his first individual show at the Hugo Gallery in New York. While exhibiting work in several venues around New York City, he most notably exhibited at the Museum of Modern Art, where he participated in his first group show in 1956. Warhol took notice of new emerging artists, greatly admiring the work of Robert Rauschenberg and Jasper Johns, which inspired him to expand his own artistic experimentation.

In 1960, Warhol began using advertisements and comic strips in his paintings. These works, examples of early Pop art, were characterized by more expressive and painterly styles that included clearly recognizable brushstrokes, and were loosely influenced by Abstract Expressionism. However, subsequent works, such his Brillo Boxes (1964), would mark a direct rebellion against Abstract Expressionism, by almost completely removing any evidence of the artist's hand.

In September 1960, after moving to a townhouse at 1342 Lexington Avenue, on the Upper East Side of Manhattan, he began his most prolific period. From having no dedicated studio space in his previous apartment, where he lived with his mother, he now had plenty of room to work. In 1962 he offered the Department of Real Estate $150 a month to rent a nearby obsolete fire house on East 87th Street. He was granted permission and used this space in conjunction with his Lexington Avenue space until 1964.

Continuing with the theme of advertisements and comic strips, his paintings throughout the early part of the 1960s were based primarily on illustrated images from printed media and graphic design. To create his large-scale graphic canvases, Warhol used an opaque projector to enlarge the images onto a large canvas on the wall. Then, working freehand, he would trace the image with paint directly onto the canvas without a pencil tracing underneath. As a result, Warhol's works from early 1961 are generally more painterly.

Late in 1961, Warhol started on his Campbell's Soup Can paintings. The series employed many different techniques, but most were created by projecting source images on to canvas, tracing them with a pencil, and then applying paint. In this way Warhol removed most signs of the artist's hand.

In 1962 Warhol started to explore silkscreening. This stencil process involved transferring an image on to a porous screen, then applying paint or ink with a rubber squeegee. This marked another means of painting while removing traces of his hand; like the stencil processes he had used to create the Campbell's Soup Can pictures, this also enabled him to repeat the motif multiple times across the same image, producing a serial image suggestive of mass production. Often, he would first set down a layer of colors which would complement the stencilled image after it was applied.

His first silkscreened paintings were based on the front and back faces of dollar bills, and he went on to create several series of images of various consumer goods and commercial items using this method. He depicted shipping and handling labels, Coca-Cola bottles, coffee can labels, Brillo Soap box labels, matchbook covers, and cars. From autumn 1962 he also started to produce photo-silkscreen works, which involved transferring a photographic image on the porous silkscreens. His first was Baseball (1962), and those that followed often employed banal or shocking imagery derived from tabloid newspaper photographs of car crashes and civil rights riots, money, and consumer household products. 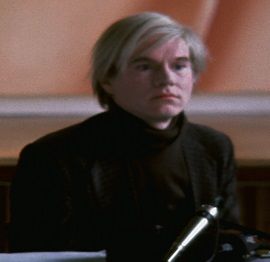 In 1964 Warhol moved to 231 East 47th Street, calling it "The Factory." Having achieved moderate success as an artist by this point, he was able to employ several assistants to help him execute his work. This marked a turning point in his career. Now, with the help of his assistants, he could more decisively remove his hand from the canvas and create repetitive, mass-produced images that would appear empty of meaning and beg the question, "What makes art, art?" This was an idea first introduced by Marcel Duchamp, whom Warhol admired. 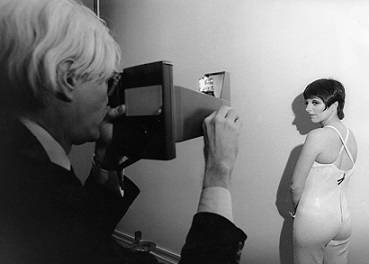 Warhol had a lifelong fascination with Hollywood, demonstrated by his series of iconic images of celebrities such as Marilyn Monroe and Elizabeth Taylor. He also expanded his medium into installations, most notably at the Stable Gallery in New York in 1964, replicating Brillo boxes in their actual size and then screenprinting their label designs onto blocks made of plywood.

Wanting to continue his exploration of different mediums, Warhol began experimenting with film in 1963. Two years later, after a trip to Paris for an exhibition of his work, he announced that he would be retiring from painting to focus exclusively on film. Although he never completely followed through with this intention, he did produce many films, most starring those whom he called the Warholstars, an eccentric and eclectic group of friends who frequented the Factory and were known for their unconventional lifestyle. 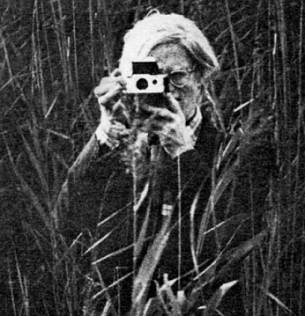 He created approximately 600 films between 1963 and 1976, ranging in length from a few minutes to 24 hours. He also developed a project called The Exploding Plastic Inevitable, or EPI, in 1967. The EPI was a multi-media production combining The Velvet Underground rock band with projections of film, light and dance, culminating in a sensory experience of Performance Art. Warhol had also been self-publishing artist's books since the 1950s, but his first mass produced book, Andy Warhol's Index, was published in 1967. He later published several other books, and founded Interview Magazine with his friend Gerard Malanga in 1969. The magazine is dedicated to celebrities and is still in production today. 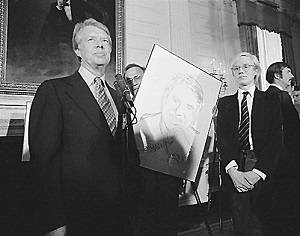 After an attempt on his life in 1968, by acquaintance and radical feminist, Valerie Solanas, he decided to distance himself from his unconventional entourage. This marked the end of the 1960s Factory scene. Warhol subsequently sought out companionship in New York high society, and throughout most of the 1970s his work consisted of commissioned portraits derived from printed Polaroid photographs. The most notable exception to this is his famous Mao series, which was done as a comment on President Richard Nixon's visit to China. Lacking the glamour and commercial appeal of his earlier portraits, critics saw Warhol as prostituting his artistic talent, and viewed this later period as one of decline. However, Warhol saw financial success as an important goal. At this point, he had made the successful shift from commercial artist to business artist. 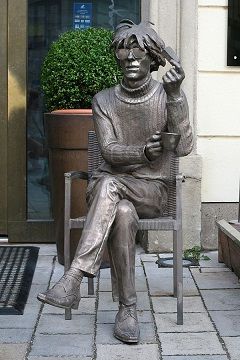 In the late 1970s and 1980s, Warhol made a return to painting, and produced works that frequently verged on abstraction. His Oxidation Painting series, which were made by urinating on a canvas of copper paint, echoed the immediacy of the Abstract Expressionists and the rawness of Jackson Pollock's drip paintings. By the 1980s, Warhol had regained much of his critical notoriety, due in part to his collaboration with Jean-Michel Basquiat and Francesco Clemente, two much younger and more cutting-edge artists. And, in the final years of Warhol's life, he turned to religious subjects; his version of Leonardo da Vinci's Last Supper is particularly renowned. In these works, Warhol melded the sacred and the irreverent by juxtaposing enlarged logos of brands against images of Christ and his Apostles.

After suffering postoperative complications from a routine gall bladder procedure, Warhol died on February 22, 1987 at the age of 58. He was buried in his hometown of Pittsburgh. His memorial service was held in St. Patrick's Cathedral in New York City and attended by more than 2,000 people.

The Legacy of Andy Warhol 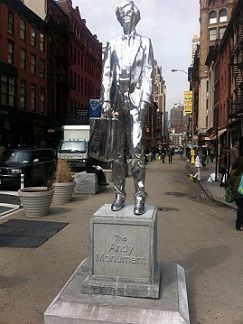 Andy Warhol was one of the most influential artists of the second half of the 20th century, creating some of the most recognizable images ever produced. Challenging the idealist visions and personal emotions conveyed by abstraction, Warhol embraced popular culture and commercial processes to produce work that appealed to the general public. He was one of the founding fathers of the Pop art movement, expanding the ideas of Duchamp by challenging the very definition of art. His artistic risks and constant experimentation with subjects and media made him a pioneer in almost all forms of visual art. His unconventional sense of style and his celebrity entourage helped him reach the mega-star status to which he aspired.

Warhol's will dictated that his estate fund the Warhol Foundation for the advancement of the visual arts, which was subsequently created later that year. Through the joint efforts of The Andy Warhol Foundation for the Visual Arts, Carnegie Museums of Pittsburgh, Carnegie Institute, and Dia Center for the Arts the Warhol Museum was opened in Pittsburgh, Pennsylvania in 1994, housing a large collection of Warhol's work.