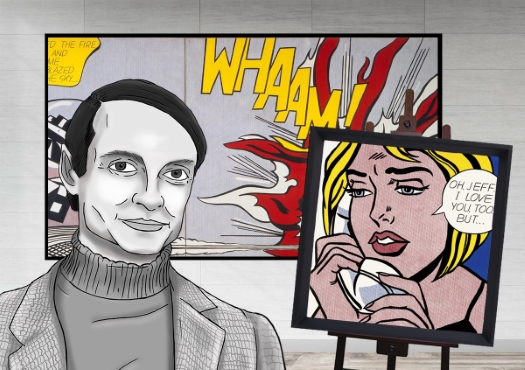 "I'm interested in portraying a sort of antisensibility that pervades society .."
2 of 7

"My use of evenly repeated dots and diagonal lines and uninflected color areas suggest that my work is right where it is, right on the canvas, definitely not a window into the world."
3 of 7

"There are certain things that are usable, forceful, and vital about commercial art."
5 of 7

"When I have used cartoon images, I've used them ironically."
7 of 7

Roy Lichtenstein was one of the first American Pop artists to achieve widespread renown, and he became a lightning rod for criticism of the movement. His early work ranged widely in style and subject matter, and displayed considerable understanding of modernist painting: Lichtenstein would often maintain that he was as interested in the abstract qualities of his images as he was in their subject matter. However, the mature Pop style he arrived at in 1961, which was inspired by comic strips, was greeted by accusations of banality, lack of originality, and, later, even copying. His high-impact, iconic images have since become synonymous with Pop art, and his method of creating images, which blended aspects of mechanical reproduction and drawing by hand, has become central to critics' understanding of the significance of the movement.

Lichteinstein was led to to put a microscope to his surroundings, to pursue a lifelong inquiry that he summarized thus: "I'm interested in portraying a sort of antisensibility that pervades society." Popeye was one of the very first Pop paintings that Lichtenstein created in the summer of 1961. At a later stage he would begin to focus on the generic human figures that appeared in cartoons of the period, but, early on, he chose immediately recognizable characters such as Mickey Mouse and Popeye (here, Popeye appears with his rival Bluto). The work is also distinct in being one of the last in which Lichtenstein actually signed his name on the surface of the picture; critic Michael Lobel has pointed out that he seems to have done so with increasing uncertainty in this piece, combining it with a copyright logo that is echoed in the form of the open tin can above it. Some have suggested that Popeye's punch was intended as a sly response to one of the reigning ideas in contemporary art criticism that a picture's design should make an immediate visual impact. Whereas most believed this should be achieved with abstract art, Lichtenstein here demonstrated that one could achieve it just as well by borrowing from low culture. In the early 1960s, Lichtenstein gained renown as a leading Pop artist for paintings sourced from comic books, specifically DC Comics. Although artists such as Robert Rauschenberg and Jasper Johns had previously integrated popular imagery into their works, no one hitherto had focused on cartoon imagery as exclusively as Lichtenstein. His work, along with that of Andy Warhol, heralded the beginning of the Pop art movement, and, essentially, the end of Abstract Expressionism as the dominant style. Lichtenstein did not simply copy comic pages directly, he employed a complex technique that involved cropping images to create entirely new, dramatic compositions, as in Drowning Girl, whose source image included the woman's boyfriend standing on a boat above her. Lichtenstein also condensed the text of the comic book panels, locating language as another, crucial visual element; re-appropriating this emblematic aspect of commercial art for his paintings further challenged existing views about definitions of "high" art. Lichtenstein expanded his use of bold colors and Ben-Day dots beyond the figurative imagery of comic book pages, experimenting with a wide variety of materials; his landscape pictures are a particularly strong example of this interest. Lichtenstein made a number of collages and multi-media works that included motors, metal, and often a plastic paper called Rowlux that had a shimmery surface and suggested movement. By re-appropriating the traditional artistic motif of landscape and rendering it in his Pop idiom, Lichtenstein demonstrated his extensive knowledge of the history of art and suggested the proximity of high and low art forms. His interest in modern art also led Lichtenstein to create many works that directly referenced artists such as Cézanne, Picasso, and Matisse. videos
Books
websites
More
videos
Interviews:
Art History:
View more videos
Books
The books and articles below constitute a bibliography of the sources used in the writing of this page. These also suggest some accessible resources for further research, especially ones that can be found and purchased via the internet.
biography
paintings
View more books
websites
More
articles and reviews
transcripts
audio clips
public art
in pop culture
View more resources
Share
Do more