Piet Mondrian, born Pieter Cornelis Mondriaan, Jr. grew up as the second of five children in a devoutly Calvinist home in central Holland. Art and music were encouraged in his household. His father, the headmaster of the local primary school, was an enthusiastic amateur artist who gave drawing lessons to his son, while Mondrian's uncle, Fritz Mondriaan, was an accomplished artist who taught his nephew to paint.

In 1892, Mondrian enrolled in the Rijksakademie van Beeldende Kunsten, or the Royal Academy of Visual Arts in Amsterdam. His three years of academic training focused on drawing from the model, copying Old Masters and genre painting. In the following years, he would rely on these skills to support himself by producing scientific drawings and copies of museum paintings, as well as giving private drawing lessons in his studio. 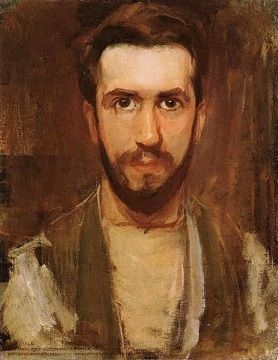 "Always further," is how Mondrian termed his drive to transform his artwork. Starting in 1905, his traditional landscape compositions began to reveal a new sense of drama and light. Jan Toorop, a leading artist of Dutch Luminism, introduced Mondrian to the French Post-Impressionists. Mondrian's paintings changed dramatically as a result, integrating, for example, the bold color and brushwork of Vincent van Gogh and the pointillist technique of Georges Seurat. Even in these early works, it is apparent that Mondrian had a tendency to work in series, focusing on a singular subject. Both of these facets would be invaluable to the development of his mature, abstract style. 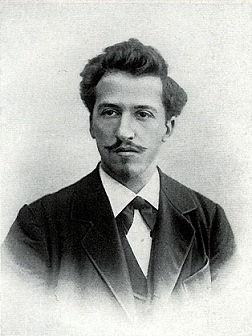 For Mondrian, art and philosophy were deeply intertwined. He was a prolific writer and theorist, and was drawn to spiritual and philosophical studies. In 1909, he joined the Theosophical Society, a spiritual organization with widespread influence in Europe in the early decades of the 20th century, based on the teachings of Buddhism. Theosophy directly influenced his representational style, expressed in paintings of flowers, and more specifically, the work Evolution (1910-1911) that echo the Buddhist and Theosophist cycle of death and rebirth. Mondrian explains the role of spirituality in his artwork, "All the time I'm driven to the spiritual. Through Theosophy I became aware that art could provide a transition to the finer regions, which I will call the spiritual realm." Though he later disagreed with some members of the group, Theosophy influenced Mondrian's goal of representing complete, pure harmony, which he expressed by the balance and tension of form and color in his paintings.

The influence of Cubism marks a turning point in Mondrian's career. In 1912, he moved to Paris, which was the thriving center of the avant-garde art world, and became fully conversant in the works of Picasso, Braque, and others, shifting from a representational, Neo-Impressionistic style to modern abstractions. Analytic Cubism gave Mondrian the structure necessary to distill his landscapes to their sparest elements of line and shape: he made use of the Cubist grid, reducing his images of trees and buildings to a schematized framework. During his first years in Paris, Mondrian temporarily adopted the Cubist muted grey and yellow/brown palette, as in The Gray Tree (1912). However, unlike the Cubists, Mondrian wished to stress the flatness of the painting surface, rather than allude to three-dimensional illusionistic depth, as the Cubists depicted.

In 1914, Mondrian was visiting his sick father in Holland when World War I broke out. He was unable to return to Paris until 1919. Despite being separated from the avant-garde in Paris, Mondrian continued to develop his style toward pure abstraction. Curved lines gradually disappeared from his paintings along with all references to objects or nature. During this key period, Mondrian and artist and architect Theo van Doesburg founded the journal De Stijl in 1917. De Stijl, or "the style," was a movement among Dutch artists, architects, and designers that presented an ideal of total abstraction as a model for harmony and order across the arts. Mondrian and these artists developed a vision of modernism independently from that found in Paris.

Mondrian termed the resulting artistic style Neo-Plasticism, or the new plastic art. For Mondrian, "plastic" merely referred to a novel way of representing reality, found upon the surface of the painting itself. Dedicated to the "absolute devaluation of tradition" the artists of De Stijl emphasized "the need for abstraction and simplification" and limited the elements in their paintings to straight horizontal and vertical lines, right angles, the three primary colors (red, yellow, blue) and the three achromatic colors (grey, white, and black). The De Stijl movement proved to have a major international influence on architecture, art, typography, and interior design throughout the 20th century. After the end of World War I, Mondrian moved back to Paris and at the age of forty-seven began creating the iconic abstract paintings for which he is best known. Within the milieu of 1920s Paris, he created a unique mode of abstraction compared to the contemporary movements of Surrealism and Paris Dada. Mondrian's paintings of the 1920s are the clearest expression of his ideal of purity and universal harmony in Neoplastic expression. It was only around 1925 that Mondrian began to receive recognition for his contribution to modernism, with his paintings entering the collections of wealthy Europeans and Americans.

Prior to the start of World War II, Mondrian moved to London for two years before settling in New York City in 1940. While in London in 1938, Mondrian met and became friends with Peggy Guggenheim, an amity that led to Guggenheim's staunch support of the Dutch expatriate, both within London and later in New York where she exhibited Mondrian's works at her Art of This Century Gallery. Mondrian was introduced to the burgeoning New York avant-garde art scene and joined the American Abstract Artists - additionally legitimizing the new group's role in modern art through his mentorship in European abstraction.

At the time, he expanded his pictorial vocabulary - introducing double lines, then color lines, and finally his black grid was replaced with pulsating lines of color squares. Inspired by his new surroundings within the American metropolis, his late paintings show a new energy and complexity of composition as evidenced in Broadway Boogie-Woogie (1943). Devoted to his work, Mondrian's life reflected the purity and discipline of his art. He remained unmarried and lived simply with few possessions. He died of pneumonia in 1944 at the age of 71.

The Legacy of Piet Mondrian The refinement of Mondrian's abstractions as well as the utopian ideals behind his work had an immense impact on the development of modern art, both while he was still alive as well as after his death. His work was immediately referenced by the Bauhaus, particularly in the simplified lines and colors of the school's aesthetic, as well as its ideal in which the arts could bring concord to all aspects of life. Later on, Mondrian's style can be seen in the developments of the Minimalists of the late 1960s, who also opted for reduced forms and a pared down palette. Not only influential within modern art, Mondrian's far-reaching impact can be seen across all aspects of modern and postmodern culture, from Yves Saint Laurent's color-blocking in his "Mondrian" day-dress, to the use of Mondrian's Neoplastic style and palette by the rock band the White Stripes for the cover of their 2000 album, De Stijl, as well as his name as the moniker for three hotels, the "Mondrian" hotel in New York, Los Angeles, and Miami.