Before World War I, Expressionism, as practiced by the groups Der Blaue Reiter and Die Brücke, held sway in Germany. Inspired by the exoticism of non-Western art and the dynamism of modern, urban life, these artists abandoned the traditional conceptions of art and searched for a language that was highly intuitive and emotional. Artists such as Ernst Ludwig Kirchner and Emile Nolde focused on the individual's inner world, highlighting the subjective perspective of seeing and understanding the world. If the idealism of Expressionism reigned before World War I, Dadaism, founded in 1916 in Zurich and spreading to Berlin shortly thereafter, embodied the nihilism and anti-art sentiments felt by many artists during the war. The fierce critique of war and bourgeois culture led to the rise of the photomontages of Hannah Hoch and Raoul Hausmann after the war.

In the wake of the establishment of the Weimar Republic, Germany's first democratic government, and still reeling from the devastations of World War I, social upheaval, and economic distress, in November 1918 Expressionist painters Max Pechstein and César Klein formed an artistic group in order to foster much-needed unity between artists, the public, and the state. As art critic Edward Sorel explained, the November Group "were confident that merely by rejecting the sentimentality of prewar German Expressionism, and substituting a more realistic, sober view of the life around them, they could not only bring about a new society, but usher in a 'new man.'" With the radical aim of establishing and supporting a socialist society, the stylistically diverse group of over 100 artists, which included Höch, Hausmann, Otto Dix, and George Grosz, held many exhibitions throughout the 1920s and encouraged the development of a new type of realism that came to be known as Neue Sachlichkeit.

By 1922, the painters Otto Dix and George Grosz were among those who stood out among German artists practicing the new realism. Having both participated in the beginnings of German Dadaism, each moved away from the conceptualism promoted by the Dadaists in favor of hard-hitting realism that exposed the effects of war and corruption. The German artist Käthe Kollwitz, usually associated with a version of Expressionism, was another contemporary that engaged the horrors of war and explored the humanity of the working class, but her treatment of her subjects had a compassion and mournfulness that was absent among the younger, brasher painters.

The term Neue Sachlichkeit, which is often translated as New Objectivity, was first coined by Gustav Friedrich Hartlaub, the director of the Kunsthalle in Mannheim, as the title for an art exhibition that was initially planned to open in 1923 but did not open until 1925. The exhibition surveyed the post-Expressionism work of various artists, including works of George Grosz, Otto Dix, Max Beckmann, Georg Schrimpf, Alexander Kanoldt, and Carlo Mense, among others. While varied stylistic approaches were still apparent, all of the artists focused on an objective view of life aimed at portraying a more "tangible reality." Another translation of Sachlichkeit is often "matter-of-factness," suggesting the focus on the commonplace and straightforward. 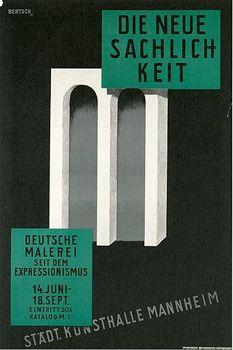 Hartlaub acknowledged the contradictions within the group, noting that the movement expressed "the enthusiasm for immediate reality as a result of a desire to take things entirely objectively, on a material basis, without investing them with ideal implications" and, yet, some tended toward a "cynicism and resignation." Given this spectrum, paintings labeled as "New Objectivity" can be hyper-realistic portraits of children or scathing caricatures of corrupt individuals.

The rejection of romantic and idealistic longings was well received among Weimar's intellectuals, who promoted a more "conscious" society. Hartlaub's exhibition travelled through several cities in Saxony and Thuringia, making Neue Sachlichkeit quite popular and influential. Although the second half of the decade saw the continued development of New Objectivity, the 1925 exhibition was the only contemporary public showcase associated with the movement.

Germany suffered numerous casualties during World War I, and approximately a quarter of a million people died from starvation or disease in the months that followed the conclusion of the war, leaving the nation in utter devastation. Combined with a highly unstable social, economical, and political context, this led to the emergence of a socialist revolution that resulted in the establishment of the Weimar Republic in 1919.

Germany's first democracy aimed to reinvigorate and redefine the nation with a new political and economical approach; however, in the years that followed, life in the Weimar Republic was marked by a tremendous hyperinflation, especially between 1921 and 1923, making the value of the German Mark completely worthless. This economic distress defined a continued generalized climate of starvation and disease, where prostitutes, beggars, and overall degradation was predominant across the nation. With huge amounts of debts to pay, the country's situation did not seem optimistic.

While geographically dispersed across Germany and stylistically diverse, the Neue Sachlichkeit artists shared the same skeptical perception regarding Germany's direction. Deeply disillusioned, their subjects and themes echoed their concerns. Otto Dix explained that all the artists "wanted to see things quite naked, clearly, almost without art."

In 1922, Gustav Hartlaub had already identified two dominant approaches among the Neue Sachlichkeit artists, writing, "I see a right wing and a left wing. The former conservative to classicist... the other, left wing, harshly contemporary... the true face of our time." The left wing of the group, including Grosz and Dix, came to be called the Verists, from the Latin word Verus meaning "true," and defined a form of realism that preferred contemporary subjects with an underlying political commentary. Art historian Stefanie Gommel writes of the Verists, "In paintings that were partly caricatured exaggerations and partly shocking, their cool, razor-sharp perspectives nailed their era and the miseries of conditions during the Weimar Republic." They were unified by their aggressive, bitter, and highly critical attacks on society and power, focused on the effects of World War I and its economic impact on individuals. Developing the ongoing conception led by Dadaism that art didn't have to adhere to specific rules or languages, the Verists developed a form of "satirical hyperrealism," a term employed by Raoul Hausmann, that emphasized the ugly and the raw in a provocative way.

Other painters of the group included Conrad Felixmüller in Dresden, Rudolf Schlichter, and Christian Schad in Berlin, whose creations were so sharp they "cut beneath the skin," according to art critic Wieland Schmied, the early works of Max Beckmann, along with, Karl Hubbuch, Georg Scholz, and Wilhelm Schnarrenberger in Karlsruhe. The Verist branch also included some photographers. While primarily known as a Dadaist for his sharp criticality of Weimar Germany, John Heartfield's photomontages are an important example of this Verist trend. 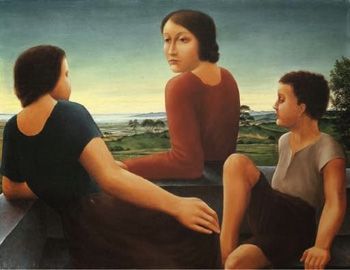 Hartlaub's right wing, the Interwar Classicists, rooted themselves in the classical conception of art, searching for a more universal artistic language and proclaiming a "return to order" that was common during the interwar years throughout Europe. The group drew inspiration from the Italian metaphysical painters such as Carlo Carrà and Giorgio de Chirico. They developed a language that was often described as "cold" and "static" and mostly avoided the social issues that were so central to the Verists. The classicists were mainly defined by the works of Georg Schrimpf, Alexander Kanoldt, Carlo Mense, Heinrich Maria Davringhausen, and Wilhelm Heise.

In 1925 the art critic Franz Roh coined the term Magic Realism to describe the trend of Neue Sachlichkeit, but during the development of the style, the term came to describe a different stylistic approach that combined an "objective" idea of life with surreal or mysterious qualities. Overall, these works emphasized a profound technical accuracy mixed with an elusive "magical" element that seemed to grant the work a "fantastic" perspective. During this time, the works of Albert Carel Willink are a main example, especially for his use of foreign objects in architectural contexts. Other artists include the later works of Max Beckmann, Carl Hofer, and Franz Radziwill, one of its main contributors whose complex, surrealistic art was created away from the artistic centers in the coastal city of Dangast. Radziwill, like Willink, used a combination of estranged elements within reality, aiming to depict "objectivity" through a different perspective.

The term Magical Realism migrated to North and South America and came to be associated with the uncanny and realist paintings of American artists Paul Cadmus, George Tooker, and sometimes Andrew Wyeth. Mexican artists such as Frida Kahlo were also engaged a Magical Realist style. It is perhaps most often associated with the literary genre, most popular in Latin America, that was practiced by the legendary writers Gabriel Garcia Marquez and Isabelle Allende, and later the term was applied to films such as Like Water for Chocolate (1992) and the films of Terry Gilliam. 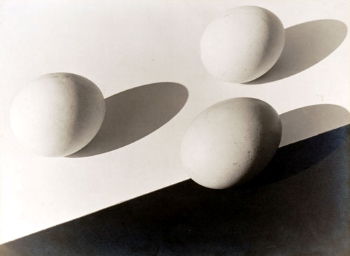 Photographers also aimed to accentuate an objective viewpoint, bringing in an unprecedented documentary aesthetic to the medium. The artists preferred subjects that depicted industry, technology, architectural spaces, and ordinary objects from daily life, such as eggs and plants. Like some of the painters, the photographers also took a keen interest in portraiture in an effort to document the realities of everyday people. In their main concern with portraying reality objectively, they tended to be associated with the Verists. Their works are characterized by the use of sharp angles, impartial perspectives, visual clarity, and order. Macro photographs were also predominant, especially in nature photography, and they often relied on serialized repetitions and ordered arrangements of objects to portray the industrial life.

Albert Renger-Patzsch's work is mostly characterized by industrial scenes and close-ups of nature, whereas August Sander, one of the most acclaimed of Germany's photographers, was known for his portraits. Hein Gorny, whose work was industrial and commercial, drawing on the tendencies spread by the Bauhaus and the Deutscher Werkbund, was also associated with the movement. Karl Blossfeldt's plant photography is also seen to be a fundamental example of the movement.

Neue Sachlichkeit came to an end with the rise of the Nazis and the end of the Weimar Republic in 1933. In October 1933, Wilhelm Frick, the Reich Minister of Interior, demanded "an end to the spirit of subversion" in art, adding that the "completely un-German constructs carrying on under the name of New Objectivity must come to an end." In 1937 all the group's work had been banished as a result of the Nazis campaign to clear Germany of "degenerate art," in German entartete kunst, which did not conform to the Nazi worldview and included all Modern art in general. Degenerate art was forbidden to be exhibited (except in an infamous exhibition put on by the Nazis to clarify public opinion), sold, and, in some cases, artists were forbidden to create. Some of the movement's artists, such as Max Beckman and George Grosz, fled the country, while others remained and adjusted to the new oppressive lifestyle.

Given the art historical tendency to favor the conceptualism unleashed by Dadaism, Neue Sachlichkeit fell out of favor with critics and historians, and its lack of a unified style and approach led some to dismiss the movement as secondary. Despite these attitudes, a new appreciation for New Objectivity as a movement began in the 1960s. This was mainly derived from Photorealism and Critical Realism movements that found great inspiration in New Objectivity. The movement thus experienced a "revival" in Germany, influencing important artists such as Sigmar Polke and his Capitalist realism ideas.

It can also be seen to be a main influence in the works of contemporary realistic photographers, such as the German husband and wife photographers Bernd and Hilla Becher, founders of the Düsseldorf School, who taught Andreas Gursky, Candida Höfer, Thomas Ruff, and Thomas Struth.