Pierre-Cécile Puvis, later known as Pierre-Cécile Puvis de Chavannes, was the youngest of four children born to Marie-Julie-César Puvis and Marguerite Guyot. His father found success as a chief mining engineer and encouraged his son to follow in his footsteps. Puvis lost both parents as a teenager - his mother in 1840 and his father in 1843. In 1841, he attended the Lycée Henri IV in Paris and prepared for admissions to the École Polytechnique. However, he decided not to sit for the exams, much against his father's wishes. At a later date, Puvis once again did not take the entrance exams - this time due to illness - and discontinued attending classes at the Faculty of Law. To regain his health, he spent two years in Macon with his sister Josephine and her husband.

Puvis's formal artistic training was sporadic, if not short in duration. In the late 1840s, he spent half a year under the tutelage of Henri Scheffler and in 1848 made a lengthy trip to Italy, where he was exposed to the works of Giotto and Piero della Francesca. Upon returning to Paris, he commenced studies with Eugène Delacroix, who was soon forced to shut down his studio due to illness. Before taking a course in anatomy and perspective at the École des Beaux-Arts, Puvis studied for a few months under the painter Thomas Couture, whose style featured hard contours and shading. In the decade following 1849, he continued his education via contact with fellow artists and teaching himself rather than formal training. Alongside several friends, who included artists working in painting and engraving, he worked off the model of an ensemble which he called The "Academy" (not to be confused with the officially-sanctioned royal institution also known as the Academy, in Paris, from which he felt somewhat removed) that offered camaraderie and support to one another through artistic feedback.

Around the age of thirty, Puvis met Princess Marie Cantacuzene. She was his main confidant in artistic matters and later became his wife. Marie often sat for his paintings, appearing notably in his portrayal of a young Saint-Geneviève. He also formed a strong friendship with the Impressionist painter Edgar Degas at the beginning of both their artistic careers.

Between 1854 and 1855, Puvis ambitiously set out to execute a mural cycle. At the time, all wall space at the Hôtel de Ville had been promised to other prominent artists (Delacroix, Jean-Auguste-Dominiques Ingres, and Henri Lehmann). Since no public commission was immediately available, he embarked on a series of decorative paintings for the chateau Le Brouchy, his brother's country estate. This kicked off his career as a decorative painter. Puvis struggled initially to receive institutional support and recognition. This feeling of instability would persist, even after a series of successes. He submitted Jean Cavalier at the Bedside of His Dying Mother to the Salon in 1852, along with other pictures, but failed to gain acceptance until 1859, with an enlarged version of his mural The Return from the Hunt. This greatly affected his view of official art institutions and gave him an unusual degree of empathy for the struggles of young, unrecognized artists for the remainder of his career. It was not until this period that mural paintings gained the prestige that had previously been awarded to other types of painting.

In 1859, the same year that his first work was accepted to the Royal Academy, Puvis appended the noble designation "de Chavanes"to his family name (changed to "de Chavannes" in 1877) and began a love affair with his model Suzanne Valadon (born Marie-Clementine Valadon and also known as Maria Valadon), an artist, and mistress to several high-profile painters in Montmartre. By the early 1860s he was exhibiting and selling work at the Salon on a regular basis. His induction into the Legion of Honor at the Universal Exposition of 1867, secured his position as an institutional insider. Puvis's critical fortunes rose steadily in the last two decades of his life. At a time when critical agreement was rare, both liberal and conservative critics hailed the frescos he unveiled at the Sorbonne in 1889 as a crowning achievement of the decade. Puvis was promoted to Commander of the Legion of Honor, and the society he had helped to found with Ernest Meissonier and Auguste Rodin (Société Nationale des Beaux-Arts) held its first salon in 1890. A one-man exhibition in New York in 1894 helped cultivate an American audience that remained robust until the mid-20th century. In 1897, Puvis married Princess Marie Cantacuzene, his partner for over four decades. They both died the following year after prolonged illnesses, two months apart. According to the artist's wishes, his heirs presented many of his drawings to French museums. 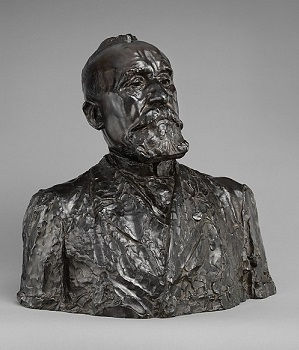 Puvis's impact on the history of art would be difficult to overstate. His aspiration to escape reality and turn inward - toward dreams, mythology, and the imagination - inspired the Post-Impressionists. The comingling of the real and supernatural in Gauguin's Vision After the Sermon, the psychic interiority of Seurat's Les Poseuses, and Cézanne's search for structure all have analogies in the work of Puvis. Another group of artists obsessed with Puvis were the Nabis, whose founder Maurice Denis paraphrased Puvis in his modernist credo: "Remember that a painting, before it is a war horse, a nude woman or some anecdote or other, is essentially a flat surface, covered in colors arranged in a certain order." Puvis's connection with the French literature of the 1880s anticipated the aesthetics and ideals of Symbolism. His languid, classical forms were copied by Picasso shortly after his arrival in Paris, lending form and substance to the Spaniard's famous blue period.

What Picasso and others saw in Puvis is still visible now: a shift away from representation and toward the language of formal abstraction. Born a generation before Van Gogh, Seurat and Toulouse-Lautrec, Puvis outlived them all and surveyed the past and future of art more calmly than these younger artists who took more risks in life and art. Nevertheless, his flat expanses of muted color and simplification of form were radical in their implications, and of great interest to 19th-century Western theorists, and his focus on painting's physical qualities - paint as paint - informed the most famous art theorist and critic of the 20th century, Clement Greenberg, as late as the 1960s.