Roy Lichtenstein
Main
Biography
Artworks
I'm never drawing the object itself; I'm only drawing a depiction of the object - a kind of crystallized symbol of it.

I'm interested in portraying a sort of antisensibility that pervades society ..

My use of evenly repeated dots and diagonal lines and uninflected color areas suggest that my work is right where it is, right on the canvas, definitely not a window into the world.

There are certain things that are usable, forceful, and vital about commercial art.

When I have used cartoon images, I've used them ironically.

Roy Fox Lichtenstein was born in New York City in a family with a German-Jewish background. He grew up on the Upper West Side of Manhattan with his father Milton, a real-estate broker, his mother Beatrice, a homemaker, and his younger sister Renee. As a child, Lichtenstein spent time listening to science fiction radio programs, visiting the American Museum of Natural History, building model airplanes, and drawing. As a teenager he nurtured his artistic interests by taking watercolor classes at Parsons School of Design, and in high school he started a jazz band.

In 1940, Lichtenstein began taking Reginald Marsh's painting classes at the Art Students League, producing work very similar to Marsh's social realist style. Later that year, Lichtenstein enrolled at Ohio State University (OSU), where he studied drawing and design along with botany, history, and literature. He created sculptural animal figures, as well as portraits and still life works influenced by the work of Pablo Picasso and Georges Braque. At OSU, Lichtenstein also took a class with Hoyt Leon Sherman, whose theories about the connection between vision and perception, or "organized perception," became important concepts for Lichtenstein as his work evolved.

In 1943, Lichtenstein was drafted into the Army. As part of his tour of duty, he took engineering courses at De Paul University in Chicago. He also served as a clerk and draftsman, enlarging army newspaper cartoons for his commanding officer. He then traveled with the Army to England, France, Belgium, and Germany. After receiving an honorable discharge in 1946, the artist returned to OSU to complete his Bachelor's degree in Fine Arts. The next year he joined the graduate program at the University and served as an art instructor. His art at this time was inspired by aspects of Abstract Expressionism and biomorphic Surrealism.

In the next several years his work was included in gallery shows, such as a group exhibition at the Ten-Thirty Gallery in Cleveland, where he met his future wife Isabel Wilson, the gallery assistant at Ten-Thirty. By this stage, his paintings featured musicians, street workers, and racecar drivers rendered in biomorphic shapes and in a style that recalled the Surrealist work of Paul Klee. Over the next several years, Lichtenstein's paintings featured birds and insects in this same Surrealist style, as well as medieval motifs, particularly imagery of knights and dragons. In addition to strictly two-dimensional paintings, Lichtenstein began nurturing what would become a long-standing interest in using multiple media; in his first solo show in New York, at Carlebach Gallery (1951), he exhibited three-dimensional assemblages of kings and horses made of wood, metal, and found objects. After moving to Cleveland with Isabel, Lichtenstein took on a number of commercial engineering and drafting jobs. His work at this time focused on cowboy and Native American motifs; more significantly, he created a rotating easel to be able to easily paint from all angles. The method of working (the rotation of the canvas) was more compelling to Lichtenstein: "I paint my own pictures upside down or sideways. I often don't even remember what most of them are about... The subjects aren't what hold my interest." In 1952, John Heller Gallery in New York began representing his work. Lichtenstein took an assistant professor position at SUNY Oswego in 1957, where his thickly textured paint and abstracted imagery drew from the Abstract Expressionist style. Unlike the Abstract Expressionists, however, he began to incorporate figures into his canvases; some of his paintings featured characters such as Donald Duck and Mickey Mouse hidden among the other depicted forms. Lichtenstein continued to teach, moving on to Rutgers's Douglass College in 1960 as an assistant professor, where he met Allan Kaprow. Kaprow introduced Lichtenstein to Claes Oldenburg, Lucas Samaras, Robert Watts, George Segal, Robert Whitman and others who were integral members of the "happenings" art scene of the 1950s and 60s. The group produced unique performative art pieces that differed each time depending on audience involvement, but Lichtenstein was inspired by their interest in cartoon imagery.

In 1961, Lichtenstein created Look Mickey, his first cartoon work using Ben-Day dots, a commercial printing style for comic books or illustrations where small, closely spaced, colored dots are combined to create contrasting colors. He later exaggerated these dots in his paintings, a technique that came to define his style. The technique he developed at this time blended aspects of hand-drawing and mechanical reproduction; by 1963 he had settled on a procedure by which he first reproduced the chosen panel from a cartoon by hand, then projected the drawing using an opaque projector, traced it onto a canvas, then filled in the image with bold colors and stenciled Ben-Day dots. In 1961, gallery owner Leo Castelli began representing Lichtenstein's work, giving him a solo exhibition in 1962 that substantially elevated the artist's renown and revenue. His fame did not come without controversy; his compositions outraged some viewers, and prompted LIFE Magazine to call him "one of the worst artists in America," albeit in a tongue-and-cheek fashion. Nevertheless, Lichtenstein soon began to show his work in major national exhibitions. In the 1960s, he continued using the Ben-Day dot technique in images of women and WWII combat scenes, as in Drowning Girl (1963), mostly adapted from issues of DC Comics. These cartoon-inspired paintings established Lichtenstein as an extremely prominent and immediately recognizable Pop art figure, both revered and reviled for his challenges to traditional understandings of "fine art."

By the mid 1960s, Lichtenstein began creating large-scale murals, his first of which was produced in 1964 for the World's Fair in Flushing, Queens. Moving beyond figural depictions, Lichtenstein also broadened his use of Ben-Day dots and bold, solid colors to depict landscapes, as in Yellow Landscape(1965). Such works often integrated industrial materials such as Plexiglas, metal, and a shimmery plastic called Rowlux, reflecting the artist's continued interest in using media beyond simply paint and canvas. Lichtenstein also began to create ceramic sculptures and, most iconically, produced a series of paintings of giant, cartoon-like brushstrokes covering the canvas, images which seemed to mock the Abstract Expressionists' use of the brushstroke as a signature and tool of individual expression. The second half of the 1960s also marked Lichtenstein's separation from his wife Isabel, and, a few years later, his marriage to Dorothy Herzka.

Lichtenstein began producing prints in 1962, using the offset lithograph technique that was more often used in commercial printing, and he began a long-term collaboration with the printmaking studio Gemini G.E.L. in 1969. In the 1970s, he left New York City for Southampton, where, inspired by Modern masters, he created still lifes and works with diverse textures and materials. Sculpture became an important focus during this time, particularly the use of bronze, which he used to produce large, painted sculptures of everyday objects such as lamps, pitchers, and steaming coffee cups. Lichtenstein also created a series of paintings involving mirrors, inspired by the historical use of mirror imagery in paintings to create a space beyond the canvas, as well as by the abstract designs used to symbolize mirrors in graphic art. 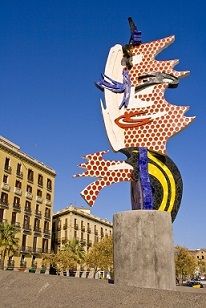 By 1980, Lichtenstein was drawing from a wide variety of influences in his work, taking inspiration from Surrealism, Cubism, and German Expressionism, and using many different types of media. He re-established a studio in Manhattan and became more interested in Abstract Expressionism, as well as in Geometric Abstraction. He created a series of home interiors in the 1990s, basing his designs on ads in the Yellow Pages. Additionally, he continued to produce large paintings and sculptures for public spaces. In 1995, he received the National Medal of Arts. After his death in 1997, the Roy Lichtenstein Foundation was established in 1999.

The Legacy of Roy Lichtenstein 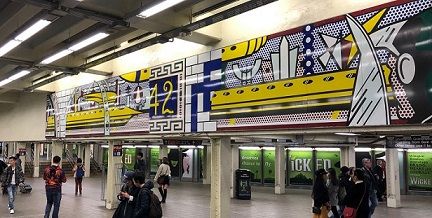 Roy Lichtenstein played a critical role in subverting the skeptical view of commercial styles and subjects established by the Abstract Expressionists. By embracing "low" art such as comic books and popular illustration, Lichtenstein became one of the most important figures in the Pop art movement. While his paintings of cartoons and comics are his most recognizable work, he had a prolific and somewhat eclectic career that drew from Cubism, Surrealism, and Expressionism. But it is his re-imagining of popular culture through the lens of traditional art history that has remained a considerable influence to later generations of artists, as Pop art went on to significantly inform Postmodernism.