Damien Hirst was born in Bristol, England in 1965. His family moved to Leeds shortly after he was born, where he spent much of his childhood. After his parents separated when he was 12, he was raised exclusively by his mother. A rebellious teen, he was arrested twice for shoplifting and was not a strong student, however he showed promise in art, and eventually decided to study at university. Coming of age in the late 1970s and early 1980s, Hirst took a keen interest in the punk music and social scene that was taking hold within British culture, gravitating toward its rejection of tradition and confrontational, gritty subject matter. He was a particular fan of the Sex Pistols - even though his mother once melted one of their LP's into a fruit bowl - and would reference them numerous times in his later work.

Hirst pursued a B.A. in Fine Art at Goldsmiths, University of London from 1986 to 1989, though his application was rejected the first time he applied. He became intensely absorbed in his studies, and quickly became a prominent member of the student community at Goldsmiths, participating in numerous clubs and organizing student-run events. During his summer breaks, he worked part-time at a mortuary back home in Leeds, an experience that would strongly influence the themes and materials he later utilized as an artist. He occasionally drew specimens and cadavers (a traditional practice among artists in the west) and the job also provided him with the technical knowledge he would later use to transform biological specimens into sculptures.

During his second year at Goldsmiths, he was the lead organizer of a group exhibition called Freeze. The show would mark a turning point in his career. In addition to his own work, the show featured pieces by sixteen fellow students, including Fiona Rae, Sarah Lucas, and other emerging talents in postmodernist art. As a group, they would become known for their take-no-prisoners approach to art, employing shockingly unconventional materials and introducing concepts that challenged the definition of art.

Freeze was held in an inexpensive warehouse space in London's Docklands, then an unfashionable and far-flung neighborhood. Hirst had initially approached a number of commercial galleries, but found little interest in the project. Michael Craig-Martin, one of Hirst's professors, persuaded a number of influential people in the British art scene to attend the show. These included Norman Rosenthal of the British Academy, Nicholas Serota, director of the Tate museums and galleries, and Charles Saatchi, then-owner of the world's largest advertising firm who ran his own London gallery. Freeze and Hirst's subsequent warehouse shows helped to inspire Saatchi to sell off much of his significant collection of contemporary American art and invest in the new generation of British artists. He hunted down pieces from student shows and alternative gallery spaces, culminating in a series of exhibitions throughout the 1990s with the title Young British Artists. Saatchi's nomenclature would stick to Hirst and his peers, who are often still referred to as "the Young British Artists," or YBAs, despite many now being in their 40s and 50s. 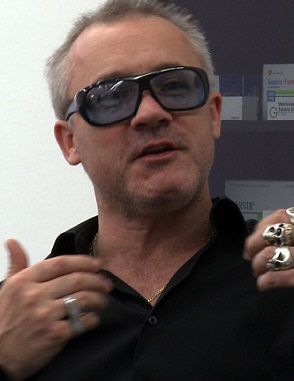 In 1991, Saatchi became Hirst's patron, offering to fund whatever the artist chose to produce. The arrangement between the two men was quick to bear fruit. Saatchi's first Young British Artists show in 1992 brought Hirst international attention and acclaim. His first Saatchi-funded work was titled The Physical Impossibility of Death in the Mind of Someone Living, a large installation piece featuring a preserved tiger shark in a large glass case. The piece earned Hirst a nomination for the Turner Prize, given to contemporary British artists under 50. Although he did not win, he would eventually claim the award in 1995. Almost immediately, he established himself as a divisive and controversial figure in the contemporary art world. His sculptures of preserved, dead animals have been his most famous and hotly debated pieces. For instance, in 1995, Two Fucking and Two Watching, a piece featuring a rotting cow and bull, was banned by New York public health officials, who feared "vomiting among the visitors." He continued to pursue shocking and challenging projects that provoked passionate, love-hate reactions from the art world. He took inspiration from his stint at the morgue, and also cited Francis Bacon - a British painter known for his unflinching, even gruesome depictions of torture, despair, and disfigurement - as a major influence. Bacon, in turn, viewed the installation and rhapsodized about it in a letter to his friend. He would become one of Hirst's major supporters.

By the late 1990s, Hirst had become a key figure in British art and culture. He directed the music video for "Country House" by the hugely popular band Blur, and wrote and directed a short film starring comedian Eddie Izzard. His lofty status within contemporary British art was cemented by 1997's Sensation show at London's Royal Academy, an event which critics have since regarded as the formal acceptance of the YBAs into the mainstream. From the late 1990s onward, several of the YBAs became mainstream celebrities in their own right, known for their swagger, swearing, and rock n' roll attitude. Hirst, the Sid Vicious of the bunch, was known for his drunken cocaine binges and outrageous behavior, among them meeting a curator naked, and allegedly removing his pants to insert a chicken bone into his foreskin at a bar in Dublin. As one Guardian reporter noted, "A night out for the Britpack was not really a night out until Hirst had taken down his trousers and waggled his willy in public." Hirst understood that fame and controversy were closely related for him, and played the part well. By the age of 33 (1988) he had written an autobiography, entitled I Want to Spend the Rest of My Life Everywhere, With Everyone, One to One, Always, Forever, Now.

Hirst attracted further controversy when his business relationship with Saatchi ended in 2003. Hirst disapproved of the way Saatchi had exhibited his work at his new gallery space, and was particularly upset that a Mini Cooper decorated in the style of one of his spot paintings was being exhibited as a serious artwork. He pulled all his works from the show, which in turn led Saatchi to call off a major Hirst retrospective at the Tate Modern. The artist decided to end his relationship with his long-time patron, buying back a number of early works for a hefty sum and telling the British press, "I'm not Charles Saatchi's barrel-organ monkey... he only recognizes art with his wallet."

Hirst has had little difficulty finding buyers and audiences for his work since ending his relationship with Saatchi. While recognizing the inherent value of public spectacle, he was savvy enough to know that shock was not sustainable as a style, and though his work continues to be highly polarizing, he adapts and innovates to suit the demands of an audience that expects him to take risks. In September 2008, he took an unprecedented step for a living artist by selling a complete show, Beautiful Inside My Head Forever, exclusively by auction at Sotheby's. It set a world record for the highest proceeds at auction by a living artist, 70.5 million pounds. Even as the global financial markets were crumbling, the auction helped make Hirst one of the richest artists in the world. Still, his work received mixed reviews. In 2009, he exhibited a group of paintings, No Love Lost, Blue Paintings, which provoked the ire of many critics, who labeled the pieces "dull" and "amateurish."

These days, he shows no signs of slowing down. He has become an active member of Britain's culinary scene, funding and designing a number of restaurants, some of which have been more successful than others. He also opened a store called Other Criteria, which produces affordable, limited-edition collector's pieces. In October 2015, he opened the Newport Street Gallery in south London, showcasing his personal collection of over 3,000 works of art.

The Legacy of Damien Hirst 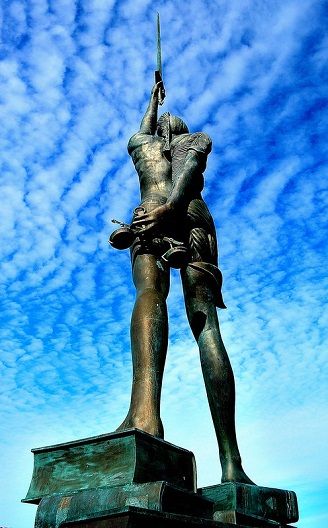 Controversy and success continue to be inseparable for Hirst, raising questions about the relationship between art and money that are unlikely to be resolved any time soon. A shrewd businessman, Hirst has transformed himself into a personal brand. He has something to sell to almost anyone. For patrons who prefer not to live with a dead shark, there are his "spot paintings," easy-to-look-at abstract canvases, based on the molecular structures of controlled pharmaceuticals. Reproductions of the notorious diamond-encrusted skull are available to consumers in an array of prices and sizes. He has also launched his own line of skateboards. In his relentlessly enterprising, unapologetically commercial approach to art, Hirst's career is closely aligned with that of fellow art star Jeff Koons, who has cited him as an influence. Cindy Sherman, Sarah Lucas, and Tracey Emin have also mentioned Hirst's impact on their work. Easily one of the most prominent artists of his generation, Hirst's success - along with that of the other YBAs - helped to create the conditions for the establishment of Tate Modern in 2000, which has since become the most-attended modern art museum in the world.

Hirst continues to be widely criticized by contemporary critics and artists who feel his work is overrated and pretentious. For instance, after his diamond skull (For the Love of God, 2007) originally failed to sell for its £50 million asking price, British artist Laura Keeble created an inexpensive replica and photographed it in the trash outside London's White Cube gallery for a work she titled Forgotten Something? Similarly, in 2009, Spanish artist Eugenio Merino displayed a sculpture of Hirst in a glass case, shooting himself in the head, titled 4 The Love of Go(l)d. Merino, actually a great admirer of Hirst, told The Guardian, "I thought that, given that he thinks so much about money, his next work could be that he shot himself. Like that the value of his work would increase dramatically. Obviously, though, he would not be around to enjoy it." While Merino claims his work is as much tribute as critique, critics have also lambasted Hirst's open desire to cash in on his talent and extensive reliance on assistants in creating his work, particularly his "spot paintings." He is candid about the fact that he did not produce the majority of these paintings, once commenting to an interviewer, "The best person who ever painted spots for me was Rachel [Howard]. She's brilliant. Absolutely f***ing brilliant. The best spot painting you can have by me is one painted by Rachel." His methods and subjects are controversial, but the impact of Hirst's creativity as an artist, curator, and entrepreneur will likely be felt within the art world for many years to come.