Feminist art in the 1970s and 1980s created a dialogue about theÂ gender inequality in society. Our modern day Guerrilla Girls have taken off the masks; they are still battling againstÂ theÂ same problems, but their methods have changed.

Amy Schumer does comedyÂ that you can’t ignore. Is it because of her sketches’ catchy songs or their on the money exposes of the impossible standards that women face in society? It’s quite the head scratcher, but, lucky us, we can watch to find out.

Youth and Beauty don’t last forever, but man’s ability to get in the way of a woman’s success stands the test of time. Ladies, get ready to disappear after fifty!

A woman isn’t a woman until she puts on her face.Â And by face we mean enough makeup and contouring to put photoshop out of business.

You don’t conform to the societal standards agreed upon by a select group of men? Don’t even think of going out in public without consulting that plastic surgeon first.
include ‘share1.htm’;

Topic 4: Make Me a Sandwich

A woman’s place doesn’t have to be in the kitchen anymore, but she better spend the rest of it in the gym.

Try to raise the issue when people don’t want to hear it and they’re gonna be like “imma let you finish but…” Don’t letÂ Kanye interrupt your speech, keep going.

The Free the Nipple campaign fights for a woman’s right to bear it all. If you can walk around the streets of New York topless, then why can’t you do the same in a photo?

Boobs and butts are okay as long as they were painted by an old white dude, but try posting your own stuff and get ready to be reported for indecency.

The next time you watchÂ Inside Amy Schumer or go onÂ Instagram see if you can spot the Feminist art connection, it’s likeÂ Where’s Waldo? but without all the crowds.

The fight for women’s rights is not limited to civic realms. During the second wave of feminism in the 1960s, the female art world didn’t demand representation, it created its own. The feminist art movement was born.

In honor of Women’s History Month, the art world is praising the tremendous achievers!

In the 1970s, an invitation to a â€śbloody Sundayâ€ť critique session at Louise Bourgeoisâ€™ house was a privilege. But, young artists had to come ready to defend. At a time when feminist art was finally making waves, Bourgeois continuously challenged the quality of her burgeoning contemporaries at these Sunday salons. She was a ruthless teacher with trailblazer credentials – one of the first artists using genitalia images to comment on gender stereotypes. 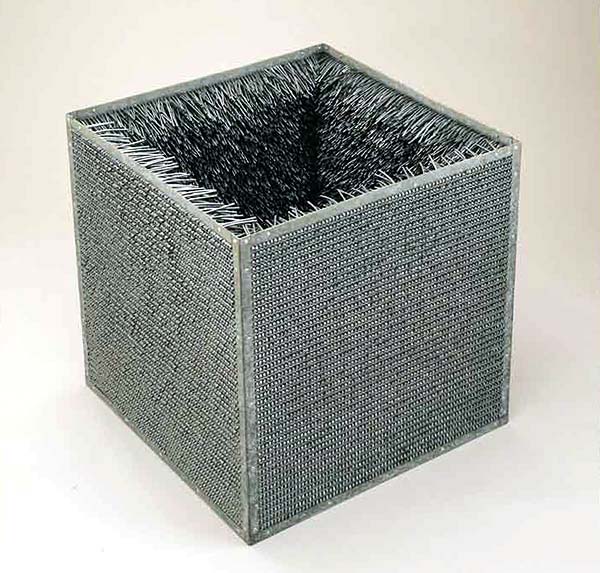 In a slew of stiff 1960s Minimalism, Eva Hesse turned geometric sculpture on its head and gave the movement a more human touch.

With contours, translucent materials and texture, her Minimal forms became organic and free-standing. They sculpted space like Robert Morris, but unlike his rigid â€śwhat you see is what you seeâ€ť works, Hesseâ€™s art emits a psychological, even sexual presence.

Subversive and highly influential in a proto-feminist art movement, Hesse inserted artistic conversations on the female body and sexual innuendo into a world of emotionless abstract forms.

An entire book could be written on the artistic importance of Judy Chicagoâ€™s 1970 â€śThe Dinner Party.â€ť The ballroom-sized artwork sets a place at the important and monumental table for 39 historical feminists from the Western world, recognizing them for tremendous achievements. Another 999 women are honored with their names inscribed in the white floor in the center of the tables.

In her nearly 50 year repertoire of artwork, Chicago is devoted to art, like â€śThe Dinner Party,â€ť that celebrates women, often using vaginal imagery. Sheâ€™s an active political powerhouse with a name almost synonymous to feminist art and has founded women-only art studios in California and New Mexico.

The mother of all things polka dots, Yayoi Kusama began playing with the idea of accumulations, a late 1950s avant-garde concept involving the consolidation of multiples of objects.

Male artist Arman made accumulations famous and Kusama subverted their meaning with a feminist twist. Arman would argue that one high-heeled shoe has a societal association, but 30 high-heeled shoes crammed in a tiny plexiglass case lose their form and influence. So, if one phallus represents power, argues Kusamaâ€™s work, then a room of stuffed phallic objects, reflected infinitely in mirrored walls renders that power irrelevant.

Kusamaâ€™s work champions sexual liberation, and in her early career, she used her body to as a canvas, a precursor to the feminist performance art movement in the next two decades.

Reading the negative review of a male critic from a scroll pulled from her vagina, Carolee Schneemann grounded the image of feminist performance art in the minds of all art historians.

Beginning in the 1960s, Schneemannâ€™s art explored the history of women in art and as artists with her nude body as material. At the time, artists like Chris Burden were performing feats of strength and extremity. Schneemann instead opened the arena to female artists, as a space for critical reflection where a female nude means much more than beauty and sexual objectification.

In the postmodern aesthetic of media and advertising, Barbara Kruger addressed a story that the wasnâ€™t being told in mainstream press: the continued feminist struggle, a daily â€śbattlegroundâ€ť on the female body. Black and white images overlaid with text became her recognized style. In themes like consumerism, feminism, and human condition Kruger gave societal comment that subverted the glitzy images of the 1980s.

She also became the first female artist to be represented by Mary Boone Gallery in New York, breaking the galleryâ€™s usual hankering for macho Abstract Expressionist painters and inserting feminist art into a blue-chip world.

In the vein of Carolee Schneemann, Tracey Emin uses personal narrative and objects to speak to the idea of femininity and gender. But, in Eminâ€™s pieces, the â€śperformancesâ€ť have already happened. While the artist is not directly associated with second wave feminism, her work is often on the same themes translated for a contemporary audience.

With objects from her home and life, Emin blurs autobiography and art. She denounces any ideas of social restrictions and reflects a life that champions gender equality, particularly in gender-specific stereotypes associated with sex.

In 2009, Emin summed up her continued feminist mission: â€śI have a strong voice and I’m quite feisty but there are a lot of women who aren’t and they need to have laws [protecting them] and rights too.â€ť