The youngest of five children, Gabriele Münter was born in Berlin in 1877. Her parents, Carl Friedrich Münter and Wilhelmine Scheuber, had met and married in America. Gabriele Münter later recalled how her father, a dentist, had initially moved to America in 1848 to avoid arrest for the promotion of liberal and revolutionary ideas. Following the outbreak of the American Civil War, however, the family returned to Germany (in December 1864). Münter's childhood was "absolutely ordinary," according to scholar Reinhold Heller, and she "grew up in the comfort and protection of a well-to-do, German middle-class home during the era of peace and relatively prosperity" in the first decades of the German Empire.

In 1886, Münter's father passed away. Her mother's death followed in 1897, leaving Münter orphaned by the age of twenty. With her sister, Emmy, Münter took her inheritance and embarked on a two-year journey across America where she and Emmy participated in cattle drives across Texas, Arkansas and Missouri. The sisters returned to Germany in 1900 where Münter, desirous of pursuing a career as an artist, and of documenting the American landscape and people she had encountered, started to finesse her drawing and painting skills. Münter began her artistic training in Düsseldorf shortly before the death of her mother. She took private lessons with the painter Ernst Bosch, and joined the Ladies' School of the Düsseldorf Arts Academy. In the words of scholar Reinhold Heller, Münter's family hoped that her pursuit of an artistic career would bring "direction and order into her life" and would rescue her "from aimlessness." Between 1900 and 1902, Münter studied with a number of artists in a variety of mediums, including sculpture, drawing, and painting. In Munich, she trained with artists at the Phalanx School, where she studied under Wassily Kandinsky, at that time also the school's chair. Münter thought that Kandinsky had, unlike previous instructors, took her artistic ambitions seriously, and she declared that he "regarded me as a consciously striving human being." The two soon developed an intimate relationship, and Kandinsky, "uncomfortable" with the co-presence of Münter and his first wife Anja, asked her to withdraw from his class. By 1903, Münter and Kandinsky had entered into a secret engagement, and planned to wed after Kandinsky secured a divorce. Though Kandinsky was officially divorced in 1911, to Münter's disappointment, the pair never married.

Before then (between 1904-07) Münter and Kandinsky travelled throughout Europe and North Africa together. The couple's peripatetic existence was determined not by a need for adventure or new painting subjects, but rather by Kandinsky's desire to, in scholar Annegret Hoberg's words, "get away from the difficulties of his private situation," and to test drive his relationship with Münter. Her itinerant years resulted in new aesthetic breakthroughs, with Münter's painting now composed of thick, Post-Impressionistic daubs of paint and naturalistic landscapes. By 1907, she began work in Paris, and exhibited paintings at the Salon des Indépendants and prints at the Salon d'Automne. The following year, the artist exhibited eighty paintings at her first solo exhibition at the Kunstsalon Lenoble in Cologne. The collaborative relationship, and reciprocal artistic influence of Münter and Kandinsky, came to define Münter's mature period. In 1908, Münter and Kandinsky moved to Munich, where they connected with Russian emigres Marianne von Werefkin and Alexej Jawlensky. 1908 also marked a trip by the two couples to Murnau in the foothills of the Bavarian Alps, a vacation which ignited a lifelong connection between Münter and Murnau. In 1909, Münter purchased a house in the region, known locally as the "Russians' House," which she hoped would eventually serve as a museum to house her art. In Murnau, Münter and Kandinsky entertained avant-garde luminaries such as Franz Marc, August Macke, Jawlensky, von Werefkin, and Arnold Schoenberg. It was among Münter and Kandinsky's new, and expanded artistic circle, that Kandinsky began his investigations of abstract painting, and Münter had what she called her "great leap" in her artistic evolution. Inspired by her surroundings, and influenced by her colleagues, Münter painted with a new fervency, and created up to five oil studies a day, all defined by formal simplicity, blocks of bold unmodulated colors, and a flattened perspective. 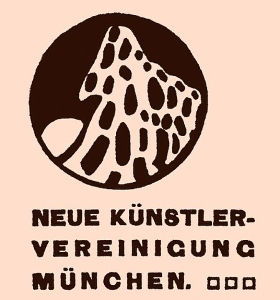 The NKVM served as a way-station en route to what would become the most notable avant-garde collective of her career, the 1911 establishment of Der Blaue Reiter German Expressionist group and the creation of its almanac with Kandinsky, Franz Marc, Marc's wife Maria, and Alfred Kubin. Inspired by the dramatic color and loose brushstrokes of the Fauves and the Parisian avant-gardes; the return to a Germanic print tradition and thickly outlined forms of the Die Brücke group; the Wagnerian ideal of a gesamptkunstwerk; studies in synesthesia; and the inspiration of international folk art and non-Western art; Münter and her Blaue Reiter colleagues created evocative and innovative works of art. When the First World War broke out in 1914, she and Kandinsky fled to Switzerland. However, the War provided a natural break for the two artists who lived apart for the majority of the conflict's duration. By September 1916, Kandinsky, by now in Russia, began a relationship with seventeen-year-old Nina Andrejewska. Nina would become his second wife in 1917, though Münter only learned of their marriage in 1920. Münter and Kandinsky were never to meet again, though Münter repeatedly attempted to contact him in the 1920s to retrieve works which were still in Kandinsky's custody. Scholar Annegret Hoberg describes Münter's pursuit as a symbolic quest for "moral amends" rather than "material compensation." Indeed, as part of the restoration of her property, Münter forced Kandinsky to admit that the two existed in a "marriage of conscience" if not in legal status, and, in 1925, she began a text entitled Confession and Accusation, which excoriated Kandinsky for ill-treatment.

Münter's aesthetic remained solidly aligned to the German Expressionist style throughout this period and she continued to exhibit prominently - especially in Scandinavia and Germany - following her separation from Kandinsky. She exhibited in Stockholm and connected with the Swedish avant-garde in 1917, opened her largest exhibition to date in Copenhagen in 1918, and exhibited in 1919 in the Der Sturm gallery in Berlin. By 1928, her reputation now established, Münter began a relationship with art historian Johannes Eichner which was to last the remainder of her life.

The artist's later career was circumscribed by the artistic demands of National Socialism. By 1931-33, Münter had settled in Murnau with Eichner, and mounted a retrospective exhibition which travelled for two years throughout Germany. However, her progressive art did not sit well with Adolf Hitler's preferred aesthetic. Eichner encouraged the artist to change her style for greater market viability, and Münter then created innocuous still lifes and portraits to generate money or to barter in exchange for food. Whatever her political beliefs may have been, she willingly generated work for National Socialist exhibitions. Münter submitted work for a 1936 Berlin Olympics Nazi project, showed two paintings in the travelling exhibition Adolf Hitler's Streets in Art, and submitted work to the 1937 Great German Art Exhibition (though her work for this exhibition was rejected). However, despite these attempts, Münter was never fully accepted by the Nazi artistic program and her art was condemned by Nazi officials in 1937. Münter was subsequently careful to hide her collection of Blaue Reiter art in her basement for fear of seizure.

After the Second World War, cultural theorists celebrated those artists and movements denigrated by Hitler as a symbolic statement of the regime's fall. Münter therefore became a sought-after link between the post-war and the pre-war avant-garde era. According to scholar Reinhold Heller, throughout the 1950s Münter's work was then exhibited "uninterruptedly, with at least one [show] a year, in German museums and art galleries." Münter received the Culture Prize for Painting in 1956 and the Gold Medallion of Honor of the City of Munich in 1957. That year she also donated much of her Blaue Reiter collection to the Städtische Galerie in Munich. Eichner died in 1958, leaving Münter to live the remainder of her days at Murnau alone, but with the sustained attention of art historians and critics. Münter passed away at Murnau on May 19, 1962, at the age of eighty-five.

The Legacy of Gabriele Münter

Though Münter sold just a few paintings in her lifetime, in the words of scholar Annegret Hoberg, Gabriele Münter was the "best-known female exponent of German Expressionist painting." Indeed, Münter helped develop and instigate the Expressionist and Blaue Reiter aesthetic, and, ultimately, through her preservation of Blaue Reiter art from Nazi persecution, became one of the Expressionist movement's most important unofficial historians.

It is true that Münter's art and life were inextricably tied to the outsized presence of Kandinsky, and some scholars, such as Hoberg, attribute periods of decreased activity or slow innovation to the psychological damage inflicted by the couple's tumultuous relationship. More than once, in Hoberg's words, Münter "subordinated her artistic development to the circumstances of her private life." Scholar Shulamith Behr has noted that it has "taken years for Münter to emerge from the shadow of Kandinsky," due as much to historiographic misogyny which privileged male Expressionists, as due to the fact that Kandinsky was a far more prolific writer and self-publicist, whose landmark texts secured "his place in the history of modernism." However, it would be a diminishment of Münter as an artist - and as a woman - to view her work solely through the lens of her personal relationship(s). Münter was an innovative, important avant-garde artist in her own right, who was recognized as such and celebrated with prominent exhibitions in her time and posthumously. She was far more than Kandinsky's muse, and, in some instances, as with her progression towards abstraction and her interest in Hinterglasmalerei, her eye and her experimentations preceded those of her more famous paramour.