Piero Manzoni was born in Soncino, a village in the Po valley near Cremona in 1933. His father was Egisto Manzoni, an Italian noble (the Conte di Chiosca and Poggiolo), and his mother, Valeria Meroni, was from a well-known family in Soncino. He was the eldest of five children with two younger brothers, Giuseppe and Giacomo, and two sisters Elena and Mariucca. Piero spent most of his childhood in Milan where he attended the prestigious Jesuit school Liceo Leone XIII. During the summers and whilst on other school breaks he would often spend time at the family house near Lake Garda as well as at a sea side resort on the Ligurian Riviera. At the age of 15 his father died from a heart attack, with Manzoni taking to art shortly after.

Manzoni never formally trained or pursed an art education, but started to paint at the age of 17, working independently to create traditional landscapes and figurative works. Many of these works were later destroyed or painted over. Due to the noble status of his family and his gregarious nature, Manzoni was a well-known and prominent social figure in the area throughout his early adulthood. As a result, he became friends with the Argentine-Italian painter Lucio Fontana, a friendship that would last throughout his lifetime and go on to influence his artistic practice. Manzoni did study for a short time at the Brera Academy in Milan, a period most notable for the amount of time he spent in 'The Giamaica', an artists' café in the city. There artists would meet and discuss their influences, desires, and ideas about the nature of art, debates that would fascinate the young Manzoni and influence his development far more than the lessons at the academy.

His first exhibitions as an artist were group shows for local painters in 1956, in which he showed oil paintings of humanoid subjects and everyday objects which had been dipped in paint and printed onto the canvas. During his early years of painting he composed a working manifesto which he used to outline his philosophy of art. Beginning in 1956 with "Per la scoperta di una zone d'immagini (For the discovery of a zone of images)", he declared that painting was his idea of freedom and his process was one of setting out to discover the images by creating them. This early interest in the use of manifestos to define the individual intentions of the artist would continue throughout his career and develop into a critical view of the conventions of the art world.

Through his friendship with Fontana he affiliated himself with the International Nuclear Movement in 1957. This group had been gaining prominence after the Second World War and became a political rallying point for artists. The 'Nucleari' group exhibited at the Galleria San Fedele in Milan in the same year, with the exhibition including the artists Enrino Baj, Franco Bemporard, Mario Rossello, Asger Jorn, Arnaldo and Gio Pomodoro, Ettore Sordini, Serge Vandercam, Angelo Verga, and Yves Klein. This exhibition proved to be inspiring for Manzoni, particularly the work of Klein, whose use of a pure field of blue (the now famous International Klein Blue) on canvases and objects were particularly engaging to Manzoni. Shortly after this exhibition Manzoni created his first Achrome, a white monochromatic canvas that sought to liberate painting from narrative and figuration. These Achromes are a series of works which have a clear debt to Klein's paintings. 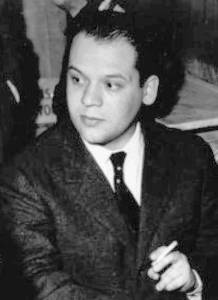 Manzoni continued to create his Achromes throughout 1958, and whilst Klein was perhaps the most obvious influence on this phase of his practice, so too was his long-term friend Fontana, whose own artistic career had garnered him much recognition and a connection with several avant-garde groups in Milan. This personal connection allowed Manzoni to develop works alongside other painters and artists thinking critically about the way art is made. This led him to think about what exactly art is and in turn expand his practice away from painting. Through Fontana's introduction he become close friends with artist Enrico Castelani, with whom he would go on to write and publish two issues of the journal Azimuth. In 1959 his series Lines was shown for the first time at the Pozzetto exhibition in Albisola, where one of the rolled drawings which had been taken out for display was damaged by a member of the audience during the opening event. He and Castelani founded Galleri Azimut together in 1959, a venue which would only stay open for a year. Manzoni's works were often exhibited in the gallery.

During 1961, Manzoni continued to question how the art object was constituted. He used what he declared was his "artist's touch" to create artworks out of human beings, certifying them as living sculptures by marking them with his signature. He exhibited these works alongside Enrico Castellani at the Galleria La Tartaruga in Rome. Manzoni also created a series of plinth works he called Magic Bases in which he would invite members of the audience to stand on to become a sculpture. This series would lead him to being asked by Danish manufacturer Aage Damgaard to create a work through a residency on his land. Manzoni took one of these plinths and flipped it upside-down, titling it Socle du Monde (Base of the World) in which he declared the entire earth to be a work of art. Damgaard would go onto donate his collection of art in order to found a museum on the same tract of land, an act which created the Herning Museum for Contemporary Art. This museum would continue the legacy of Manzoni by running a biennial in his name. During this period, Manzoni was also still regularly creating new Achromes with varying materials and showing in group exhibitions. His work featured in the twelfth edition of the Premio Lissone as well as being included in the "informative experimental section" of the Gruppo Milano 61 artists. This was also the year in which he produced his (arguably) best-known and controversial work of art, the Merda d'Artista (Artist's Shit), in which Manzoni produced and labelled 90 small cans ostensibly filled with his own excrement. This work was first exhibited in the Albisola, Galleria Pescetto in August.

Manzoni's profile continued to grow during this period, with several notable group and solo exhibitions. In 1962 his work was featured at the Zero exhibitions in Antwerp and Bern, and he also participated in the show of Nul (Nothingness) in Amsterdam at the Stedlijk Musuem, which was organized by one of his peers, artist Henk Peters. The concept for this exhibition was looking at the "disappearing of the work of art", an idea which stemmed from a manifesto signed by Manzoni in 1960 and was published in Basle, the "Manifesto contro niente per l'esposizione internazionale di niente (Manifesto against nothing for the international exposition of nothing)". Piero Manzoni passed away suddenly in his studio on the 6th February 1963 of a heart attack, on the same day an exhibition of his Achrome paintings was being held in Brussels. His death certificate was signed by his friend, fellow artist Ben Vautier, and declared a work of art.

The Legacy of Piero Manzoni

Whilst Manzoni may now be best known for his Merda d'Artist, he was an artist who truly embraced the avant-garde of the late 1950 and 1960s to craft his own unique brand. In his work, performance and intent were the driving forces behind his attempts to change the world. His work serves as a precursor to contemporary art movements such as Body Art, Performance Art and Conceptual Art. He was also cited as a key influence on the Italian artistic movement Arte Povera of the late 1960s and 1970s, where Italian artists embraced the use of 'poor' materials Manzoni pioneered. It has been suggested by artists involved in the Arte Povera movement that it is continuation of an artistic project that began with Manzoni.

His Body Art works, most specifically Merda d'Artist also have ties with the notion of the abject, a focus on the lived reality of the body to create works which threatened the distinction between subject and object (causing a dissonance in the viewer's perception). Recognizing the subjectiveness of a dead body, for example, causes the viewer to realize their own potential 'objectness'. Abjection as a theory applied to artistic practice came into prominence through psychoanalyst Julia Kristeva's book Pouvoirs de l'horreur. Essai sur l'abjection (1980) and was later connected explicitly to artistic work like Manzoni's.

Manzoni's poignant and humorous interventions into the art market of Italy after the Second World War stood out in their deep commitment to the questioning of what art is and could be through an almost prankish or subversively impolite quality. The ripples of this practice can be seen in the work of artists as diverse as Gavin Turk, Tracey Emin and Gilbert & George, who similarly combine humor with their conceptual endeavours.

The Piero Manzoni Foundation, which manages the artist's estate, has in the late 2010s become embroiled in several litigations and arguments over the authenticity of works, culminating in the 2018 destruction of 32 pieces deemed forgeries by an Italian civil court. This was contrary to a criminal court judgement on the same case. This controversy has been tied to accusations that the foundation interferes in the authentication process of Manzoni works in order to inflate the value of its own holdings, a perhaps ironic consequence of a practice that attempted to subvert the newly marketised art world in the post-war period.