Édouard Manet was born into an upper-middle-class Parisian family. His father, August, was a dedicated, high-ranking civil servant and his mother, Eugenie, was the daughter of a diplomat. Along with his two younger brothers, Manet grew up in a bourgeois environment, both socially conservative and financially comfortable. A mediocre student at best, he enrolled at thirteen in a drawing class at The Rollin School.

Manet had a passion for art from an early age, but agreed to go to the Naval Academy to appease his father. When he failed the entrance exam, he joined the Merchant Marine to gain experience as a student pilot and voyaged to Rio de Janeiro in 1849. He returned to France the following year with a portfolio of drawings and paintings from his journey, and used it to prove his talent and passion to his father, who was skeptical of Manet's ambitions. 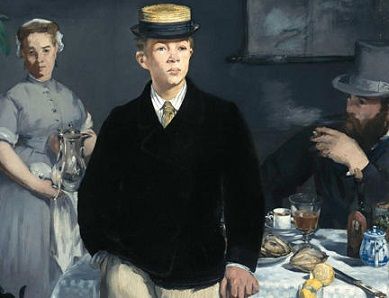 In 1849, Manet had an affair with his family's piano teacher, Suzanne Leenhoff. This affair resulted in a boy born in 1852, Leon, who was passed off to Suzanne's family and, to avoid scandal (from Manet's aristocratic family), was introduced to society as Suzanne's younger brother and Manet's godson. The following year, Manet traveled to Italy, both for the art and for social distraction.

Reluctantly, his father allowed Manet to pursue his artistic goals. In January 1850, true to his contrary nature, instead of going to the Ecole des Beaux-Arts to learn what he considered outdated modes, Manet joined Thomas Couture's studio. While Couture was an academic painter, and a product of the Salon system, he encouraged his students to explore their own artistic expression, rather than directly adhere to the aesthetic demands of the days.

He trained under Couture for six years, finally leaving in 1856 and starting his own studio in the rue Lavoisier. His ability to set up his own space (although it was a joint endeavor with painter Albert de Balleroy) was entirely due to his financial security, which also enabled him to live his life and create art in his signature fashion. Becoming a flaneur of Parisian life and translating his observations onto his canvases came naturally for Manet. His financial security also enabled him to travel through Holland, Germany, and Austria, and to visit Italy on several occasions. He met Edgar Degas and Henri Fantin-Latour - both would become important lifelong friendships. Friends with poet Charles Baudelaire and artist Gustave Courbet, Manet moved amongst other progressive thinkers who believed that art should represent modern life, not history or mythology. This was a tumultuous artistic shift that pitted the status quo of the Salon with avant-garde artists who suffered mightily at the hands of the conservative public and vicious critics. Manet was the focus of several of these controversies and the Salon of 1863 refused his paintings. Manet and others protested and the Emperor relented by putting all of the rejected works into the secondary Salon des Refuses, so the public could see what had been deemed unworthy.

The shocking Le Dejeuner sur l'Herbe (1863) drew the most criticism for a number of reasons. The Renaissance allusions did not make sense to viewers, but what they did understand was the shameless and realistically rendered nudity of a woman - likely a prostitute - staring at them from the canvas. Critiques included comments that the painting was "vulgar," "immodest," and "unartistic," comments that deeply distressed Manet and likely caused him a serious bout with depression.

Being included in the Salon des Refuses would have been upsetting for Manet's ego and personal reputation. His rebellious instincts encouraged him to want to change the system of exclusion under which the institutions - i.e. the Salon and Ecole des Beaux Arts - operated, but he did not want them eliminated. Firm in his upper-middle-class background, Manet was embedded with certain ideals of achievement and he wished to be successful at the Salon - only on his terms, not theirs. The result was the creation of an unwitting revolutionary, and, arguably, the first modern artist.

More controversies continued in the following year when he produced Olympia (1863), which featured another nude of his favorite model, Victorine Meurent. Manet claimed to see the truth in her face, while painting her entire body for the world to see. This proved to be too confrontational and unacceptable to the Parisian public when viewed at the 1865 Salon. He wrote to his close friend Baudelaire, "They are raining insults upon me, I've never been led such a dance."

After the death of Manet's father in 1862, he and Suzanne wed to legitimize their relationship, although their son Leon may never have known his true parentage. Manet's mother had likely helped the two conspire to keep the secret from Manet's father as he would not have tolerated the disgrace of an illegitimate child in the family. There has also been some speculation that Leon was actually Manet's father's child, but this is extremely unlikely. 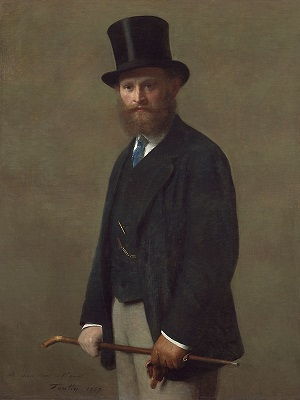 In 1864, Manet lived on the rue des Batignolles, and from 1866 he began to hold court every Thursday at the Café Guerbois, with the likes of Henri Fantin-Latour, Edgar Degas, Emile Zola, Nadar, Camille Pissarro, Paul Cézanne, and, by 1868, Claude Monet, Pierre-Auguste Renoir, and Alfred Sisley. The meetings of what Zola termed "the Batignolles Group" were a mixture of personalities, attitudes, and classes; all joined together as independent-minded, avant-garde artists to forge the principles of their new artistic styles. With the assembling of such minds and talents on a regular basis, there was a great degree of mutual influence and such a mixing of ideas that they could all be said to have influenced one another. However, Manet was an early leader with his avant-garde Realism, along with Monet and Renoir, who eventually emerged as leaders of what would be called Impressionism.

The Salon of 1866 refused his pieces The Fifer (1866) and The Tragic Actor (1866). In response, Manet held a public exhibition in his own studio. In support of this avant-garde move, Zola wrote an essay about Manet in L'Evenement, for which he was fired. The following year Manet was excluded from the Paris Exposition Universelle, and decided not to submit anything to the Salon and instead set up a tent near Courbet's to exhibit his work outside the Exposition, where he again was criticized soundly.

Having painted a troupe of Spanish performers in 1861, Manet had been interested in Spanish culture, and after visiting Spain in 1865 he was affected by the works of Diego Velázquez and Francisco Goya. This was expressed both in his style and subject matter. As a staunch Republican, Manet was unhappy with Napoleon III's government. In the painting The Execution of Emperor Maximilian (1867), which compositionally gave a nod to Goya, he implicated the French government in the tragic death of Maximilian in Mexico. This work was considered too politically controversial and its display was forbidden. 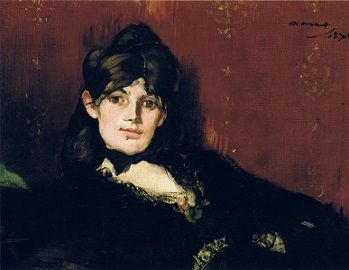 Another important meeting was in 1868, when Henri Fantin-Latour introduced Manet to the Morisot sisters. Manet's relationship with the painter Berthe Morisot was fraught at best. She became his student, he respected her as a painter, and even had her model for him on multiple occasions. While there was a multi-year, mutual infatuation, a true affair was impossible (both were from proper families, Manet was married, and Morisot only saw him with a chaperone). On one occasion, Manet painted and also taught the young Eva Gonzales - Morisot was deeply hurt when she find out. Ultimately, to avoid any domestic disturbances, Morisot married Manet's younger brother Eugene (who was certainly not the charismatic star that Manet was). This effectively ended their personal relationship, as Morisot never sat for him again, but she never stopped being Manet's biggest advocate. 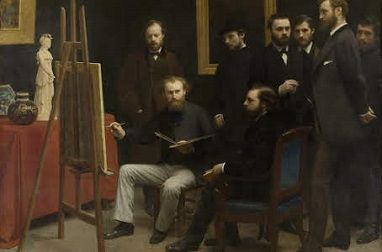 Fantin-Latour's A Studio at Batignolles (1870), which depicts a gathering of Monet, Zola, Bazille, and Renoir, among others, all admiring Manet as he paints in his own studio, demonstrates Manet's significance to the modern art world. However, while some of his friends, like Monet, went to London to escape the Franco-Prussian War, Manet joined the National Guard. The political events of the next few years forced Manet to stay out of Paris, returning only briefly during the Versailles repression. He was later forced to leave his destroyed studio and set up in the rue de Saint-Petersbourg in 1872. Manet angered the Salon once again in 1875, with his submission Argenteuil (1874), which showed a lighter palette and the influence of Monet's Impressionism. With Argentueil, Manet sent the Salon what was essentially a manifesto of the emerging style, intended for those who had not attended the group's seminal exhibition in 1874.

In 1876 the Salon rejected several of his works, so Manet responded by hosting another exhibition at his own studio, which drew over 4,000 visitors. And while many in the press claimed the Salon's rejection was unfair, he continued to be ostracized, with a subsequent denial coming in 1877. Refusing to submit to the 1878 Salon or to hold his own exhibition, Manet showed nothing that year and instead changed studios. Coincidently, that same year ill health began to affect his daily life.

After taking some time away from Paris to aid his declining health, at the Salon of 1880 Manet was awarded a 2nd place medal, granting him a pass from future competition and the chance to become a permanent exhibitor at all future Salons. Among further accolades, Manet was awarded the Legion of Honor in 1881. Continuing his life as the flaneur, Manet recorded the modern changes in the streets of Paris and the lives of its inhabitants. The café concerts were a great symbol of these changes - a place where men and women from varying levels of society were able to mingle, enjoying company, drinks, and entertainment. Set in his favorite café concert, he created one of his most lauded works, A Bar at the Folies-Bergere (1881-82).

Manet continued to paint portraits of women, still lifes, landscapes, and flowers, even from his sickbed (he was unable to visit his studio in the last months of his life). Succumbing to a nervous disorder - most likely from tertiary syphilis - Manet died a horrible death after having been reduced to a wheelchair from gangrene, and even losing his leg. He was only 51 years of age. In his will, he left his estate to Suzanne and obliged her to leave everything to Leon upon her death, which, for all practical purposes, confirms Leon as Manet's son and heir.

The Legacy of Édouard Manet 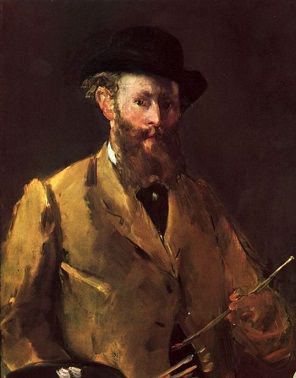 After his death, Manet's wife and friends worked to secure his memory and legacy, through extraordinary sales of his paintings, acquisitions by the French government, and by publishing several biographies. Considered by many art historians to be the father of modern art, Manet's influence on modernism is immeasurable. While greatness and scandal characterized his professional life, his desire for respectability ultimately dictated his private life. In spite of his relatively short career, spanning a little over two decades, his works are held in most major international museums and galleries.

He is best summarized by the 19th-century writer Edmond de Goncourt "With Manet, whose techniques are lifted from Goya, with Manet and all the painters who have followed him, what we have is the death of oil painting, that's to say, of painting with a pretty, amber, crystalline transparency, of which Rubens's Woman in a Straw Hat is the epitome. Now we have opaque painting, matt painting, chalky painting, painting with all the characteristics of furniture paint. And everyone's doing it like that, from Raffaelli to the last little Impressionist dauber."