John Constable
Main
Biography
Artworks
Landscape is my mistress - 't is to her that I look for fame - and all that the warmth of the imagination renders dear to Man.

[painting] is with me but another word for feeling.

I associate my careless boyhood with all that lies on the banks of the Stour; those scenes made me a painter

Painting is a science and should be pursued as an inquiry into the laws of nature.

We see nothing till we truly understand it.

I never saw an ugly thing in my life: for let the form of an object be what it may - light, shade, and perspective will always make it beautiful.

Born in East Bergholt, a village in Suffolk, England, John Constable was the second son of Golding and Ann (née Watts), wealthy corn merchants who owned Flatford Mill in East Bergholt and later Dedham Mill in Essex. Constable's older brother (also called Golding) was subject to seizures and was considered unfit to succeed his father into the family business. The task consequently fell to John and after leaving his school in Dedham, Constable joined his father in the corn business, a role for which he had limited enthusiasm and aptitude. Despite his disability Golding Jnr went onto to become a land warden and the two brothers remained close throughout their lives. Constable had five siblings in total, three sisters and another brother, Abram, who was the youngest member of the family.

In his youth Constable travelled the countryside surrounding his home on sketching trips, these landscapes later became a focus for much of his art. As he recalled later in life, "I associate my careless boyhood with all that lies on the banks of the Stour; those scenes made me a painter." His family introduced him to Sir George Beaumont, a collector, who showed him Hagar and the Angel (1646) by Claude Lorrain which was an early inspiration for him. Although his interest in art was encouraged by John Thomas Smith, an artist and friend of the family, he was strongly advised by him to stay in his father's business rather than take up painting professionally. In 1799, after having worked in the corn business for seven years, Constable persuaded his father to let him pursue a career as an artist. He was given a small allowance and entered the Royal Academy Schools where he studied life drawing and became familiar with the works of the Old Masters. On completion of his training he refused the position of drawing master at Great Marlow Military School, resolving instead to become a professional landscape painter. In a letter to John Dunthorne he wrote 'For the last two years... I have not endeavoured to represent nature with the same elevation of mind with which I set out... There is room enough for a natural painter.' He started exhibiting at the Royal Academy from 1802.

Apart from a two-month tour of the Lake District in 1806, Constable established a pattern of spending his summers sketching and painting around East Bergholt and then returning to London in the winter. Unable to find buyers or commissions for his landscapes, he turned to portraiture to supplement his meagre income, and although he produced a number of fine portraits he found the process dull compared to the pleasure he took in landscape painting.

In 1811 Constable visited Bishop John Fisher and his family in Salisbury, the two had initially met when Fisher was Rector of Langham Church in Essex which was close to East Bergholt. Bishop Fisher became one of Constable's biggest patrons and Salisbury inspired some of his greatest works. The Bishop also introduced Constable to his nephew, Reverend John Fisher and the two developed a life-long friendship.

In 1809 Constable proposed to Maria Bicknell who he had first met when she was twelve. Her grandfather, however, forbade the match and threatened Maria with disinheritance, believing the Constable family to be socially inferior. Unable to support a wife and family on his limited income, the couple maintained a secret correspondence but were not able to marry until after the death of Constable's father in 1816. John Senior left provision for each of his children and Constable's brother Abram continued to run the business for the benefit of the whole family. Although not making Constable wealthy, this finally provided the necessary financial stability for marriage. The couple were wed at the Church of St Martin in the Fields in London and spent their honeymoon with Bishop Fisher and his wife in Osmington, Dorset, followed by a tour of the south coast of England. It was sketching the sea at Brighton and Weymouth on this trip that encouraged Constable to adopt a freer brushwork and to experiment with showing greater emotional intensity in his work, particularly in his rendition of the sky and sea. After the honeymoon, Constable returned to London initially setting up house with his new wife in Bloomsbury, before they moved to Hampstead in 1819. 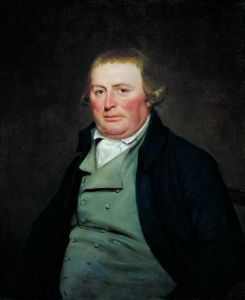 Constable continued to scrape an income as a painter, although matters improved in 1819 when he sold his first important work, The White Horse (1819), this was a large-scale canvas, known as a six-footer. The same year he was elected an Associate of the Royal Academy.

In 1821 he exhibited The Hay Wain (1821) at the Royal Academy. It was shown again, along with two other of his paintings, at the Paris Salon of 1824, where it was awarded a gold medal from Charles X. Although more successful in France than in England, Constable refused to cross the Channel to promote his work, writing to Francis Darby, a fellow artist and friend, that he "would rather be a poor man in England, than a rich man abroad." Constable's wife Maria, had been a weak child, and ill health plagued her for most of her life. In 1824, at the suggestion of physicians, Constable took his family to Brighton, an increasingly popular holiday resort, to enjoy the fresh sea air. Her health improved, and they maintained lodgings in the town for the next four years. Although he disliked the people in Brighton, describing it in a letter to his friend, John Fisher, as a "the offscouring of London... and the beach is Piccadilly by the sea", he loved the surrounding landscapes of which he made a range of experimental oil sketches.

Throughout his life Constable was compared with Turner and anecdotes suggest that the two maintained a lively and personal rivalry. Turner initially painted in the academic style and was welcomed into the English art establishment early in his career, finding a mentor in Joshua Reynolds. Later his style developed and diverged becoming increasingly impressionistic. Whilst similarities can be drawn between the style of Constable's oil sketches and Turner's later work their aims deviated. In contrast to Constable's studied approach, Turner often choose his subjects, compositions and lighting for dramatic effect using his images as a means to pass comment on contemporary issues and to create an emotional response in the viewer, rather than seeking the truth of what he saw. In March 1828, Maria's father died, and her large inheritance meant that their financial worries were over. Happiness was, however, short-lived. Maria, weakened by the birth of their seventh child, died from tuberculosis in November 1828, aged 41. Constable was distraught, writing to his brother Golding, "hourly do I feel the loss of my departed Angel... the face of the World is totally changed to me."

In February, the following year, Constable was elected to the Royal Academy at the age of 52. Constable never recovered from the loss of his wife and struggled with the responsibility of bringing up their seven children. In 1831 he painted his final six-footer, Salisbury Cathedral from the Meadows, (1831) at the suggestion of Bishop Fisher.

Constable spent the last few years of his life delivering public lectures on landscape painting at the Royal Institution, the Hampstead and Literary and Scientific Society and the Worcester Athenaeum. He also embarked on a project to publish a folio of mezzotints but was unable to interest enough subscribers for the venture to be a financial success, although today they are widely sought after. He died in 1837 in his studio in Bloomsbury and is buried at Hampstead Parish Church, London.

The Legacy of John Constable Constable was one of the first artists of the Romantic movement to create landscape paintings drawn directly from nature rather than the idealised and dramatic depictions favored by other artists of the period and in taking this stance he pioneered Naturalism in Britain. His treatment of light, application of paint and his use of bright, naturalistic colors also set him apart. Through the exhibition of his canvases in Paris, Constable influenced major figures of European art including Richard Parkes Bonington and Delacroix . Delacroix's journals include an account of Constable's technique, particularly his use of "broken color and flickering light". Delacroix incorporated these ideas into his work when he repainted the background to Scenes from the Massacres of Chios (1824).

Constable's legacy is also apparent in the work of the Barbizon School, a group of French painters who worked to establish Realism in French landscape painting. His impasto style and his practice of direct observations from nature were developed by notable artists from this school such as Jean-François Millet and Jean-Baptiste-Camille Corot and later, by the Impressionists.

Although Constable fell out of favor following the Gothic revival in the mid-19th century, he found a new following in the early-20th century, particularly with the British Impressionists such as Philip Wilson Steer. Lucian Freud also cited Constable as a significant influence on his work, commending his oil sketches as "completely fresh, really passionate pictures." Edited and revised, with Synopsis and Key Ideas added by Kate Stephenson