Marc Chagall was the eldest of nine children born to Khatskl Shagal and Feige-Ite in the settlement town of Liozna, near Vitebsk, an area that boasted a high concentration of Jews. Raised in a Hasidic family, Chagall attended local Jewish religious schools - obligatory for Russian Jews during this time, since discrimination policies prohibited mixing of different racial groups - where he studied Hebrew and the Old Testament. Such teachings would later inform much of the content and motifs in Chagall's paintings, etchings and stained-glass work.

During his school days, Chagall adopted the habit of drawing and copying images from books, which quickly developed into a love for art and the choice to pursue it as a career, a decision that did not please his parents. In 1906 Chagall began his tutelage with the famous Russian portrait artist Yehuda Pen, who operated an all-Jewish private school in Vitebsk for students of drawing and painting. Although grateful for the free formal instruction, Chagall left the school after several months.

That same year Chagall moved to St. Petersburg to continue his studies at the Zvantseva School of Drawing and Painting where he briefly apprenticed under the artist and set designer Leon Bakst. Bakst, a devout Jew himself, is believed to have encouraged Chagall to introduce Jewish imagery and themes in his work, a practice that was unpopular at this time, especially given the Russian Empire's hostility towards the religion.

Chagall moved to Paris in 1910, just as Cubism was emerging as the leading avant-garde movement. At the impressionable age of 23 and speaking no French, Chagall aligned himself with Cubism and enrolled in classes at a small art academy. In early paintings like The Poet, or Half Past Three and I and the Village (both 1911), Chagall is clearly adopting the abstract forms and dynamic compositions that characterize much of Cubism, yet he came to reject the movement's more academic leanings, instead infusing his work with touches of humor, emotion, and cheerful color.

While in Paris, Chagall kept close to his heart his home town of Vitebsk, often using subject matter from memory in his paintings. Subjects included pastoral village scenes, weddings, and fiddlers playing on rooftops. In many of the pictures, the figures seem to float freely in the sky, signatures of Chagall's lyrical and melancholic love of his far-away home.

Parisian scenes also found their way into Chagall's repertoire, with paintings like Les fiancüs de la Tour Eiffel and Paris Through the Window (both from 1913), which recall the work of Henri Matisse, and Chagall's friend Robert Delaunay. Complementing these elements, his work contained near-supernatural qualities that are considered key precursors to Surrealism. 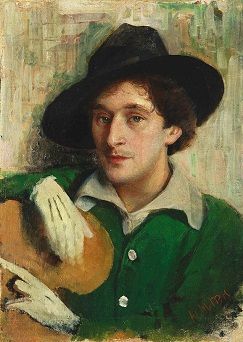 During one of his brief visits to Russia during this time, Chagall fell in love and became engaged to Bella Rosenfeld, who came to be the subject of many of his paintings, including Bella with White Collar (1917). In 1914, Chagall returned to Vitebsk via Berlin (where he enjoyed a well-received exhibition of some 200 works at the Sturm Gallery, all of which he would never recover), with plans to marry Bella and subsequently move back to Paris. The two did marry, but the outbreak of World War I that same year put a stop to their plan to return to Paris, and for the next nine years Chagall and his wife would remain in Russia.

Not long after the war's outbreak, the Bolshevik Revolution of 1917 occurred, an event that essentially obliged Chagall to remain in Russia and thrust him into the political post of Commissar of Arts for Vitebsk, a position that allowed him to open the important People’s Art School in 1918. The school attracted the instructors Kazimir Malevich and El Lissitzky. A short period of innovation followed, but ended first by Chagall's departure (who felt betrayed and overpowered by the charismatic Malevich), and later by the school's closing in 1922. In the early 1920s Chagall exhibited some new paintings in Moscow and St. Petersburg, but his overall work ethic and pace lessened due to the tense climate. 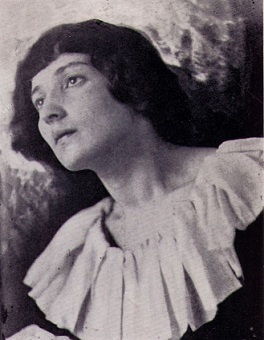 After scraping by for a few years, Chagall and Bella saved enough money to move back to Paris in 1923. At this point, Chagall's name had some caché in modern art circles, affording him the opportunity to travel throughout Europe and the Mediterranean. Notably, Chagall formed a friendship with dealer Ambroise Vollard, who commissioned Chagall to draw and paint multiple religious scenes from the Old Testament and similar sources. In addition to Chagall's Jewish themed works, such as Green Violinist (1923-24) and Dancing Mirjam (1931), he often drew inspiration from the Christian Bible. He also travelled to Palestine and the Holy Lands in 1931. In addition to his many oil canvases and gouaches, such as the iconic White Crucifixion (1938), Chagall created some 100 etchings illustrating scenes from the Bible.

In the coming years, World War II crippled most of Europe and forced many of its greatest modern artists, both Jew and gentile, to seek refuge in the United States. Hitler's Third Reich reigned over a large portion of the continent, including Vichy France, where the Chagalls were then living, and it is said that Joseph Goebbels personally ordered the artist's paintings to be burned. In 1941, thanks to Chagall's daughter Ida, and the Museum of Modern Art's director Alfred H. Barr, Jr., Chagall's name was added to a list of European artists whose lives were at risk and in need of asylum, and that June, Chagall and Bella arrived safely in New York City.

Just before the war in Europe came to a close, Bella died from a viral infection, and it came to Chagall's attention that Vitebsk had been razed during the German invasion of Russia. Crippled with grief, Chagall's work lessened dramatically, yet he continued to take commissions for theatrical sets and costume designs (a medium for which Chagall received great praise at the time, but which has since garnered little posthumous attention). Chagall never truly made New York his home, and in 1947 the widower returned to France and settled in the southern city of Vence. He was remarried in 1952, to Valentine 'Vava' Brodsky, and he continued to paint, but his later canvases are remarkably different than his better-known earlier works. His colors and subjects appear more melancholy, and his painterly touches became increasingly lyrical and abstract, almost reverting back in time to Post-Impressionist motifs. This led several mid- and late-century critics to label Chagall's later work "clumsy" and lacking in focus.

The crowning achievements of the last two decades of his life were a series of large-scale commissions. The first came in 1960, for stained-glass windows. These represented the twelve tribes of Israel, and were installed at the Hadassah University Medical Center in Jerusalem. Similar commissions followed in both Europe and the U.S., including the memorial window Peace (1964) for the United Nations, and The America Windows (1977) for the Chicago Institute of Art, which Chagall considered tokens of gratitude for his brief asylum in the U.S. during World War II. Significant commissions for murals also helped define Chagall's late career, and included the ceiling of the Paris Opera House (1963) and the juxtaposed murals The Sources of Music and The Triumphs of Music (1966) for the Metropolitan Opera in New York.

In 1985 Chagall passed away at the age of 97, by now the last surviving of the original European masters of modern art. He was buried in Saint-Paul, in southeastern France.

The Legacy of Marc Chagall Marc Chagall's influence is as vast as the number of styles he assimilated to create his work. Although never completely aligning himself with any single movement, he interwove many of the visual elements of Cubism, Fauvism, Symbolism and Surrealism into his lyrically emotional aesthetic of Jewish folklore, dream-like pastorals, and Russian life. In this sense, Chagall's legacy reveals an artistic style that is both entirely his own and a rich amalgam of prevailing Modern art disciplines. Chagall is also, much like Picasso, a prime example of a modern artist who mastered multiple media, including painting in both oil and gouache, watercolor, murals, ceramics, etching, drawing, theater and costume design, and stained-glass work.