William Morris
Main
Biography
Artworks
What business have we with art at all unless all can share it.

I do not want art for a few, any more than education for a few, or freedom for a few.

That thing which I understand by real art is the expression by man of his pleasure in labour.

Have nothing in your house that you do not know to be useful, or believe to be beautiful.

Apart from the desire to produce beautiful things, the leading passion of my life has been and is hatred of modern civilisation.

Tomorrow, when the civilised world shall have a new art, a glorious art, made by the people and for the people.

William Morris was born in 1834 in Walthamstow, Essex, the third of nine children. William's father, after whom he was named, was a self-made business man, who was able to provide an upper-middle-class lifestyle for his family because of a shrewd investment in a Devonshire mine. Although William Morris Senior died when his son was just thirteen, the wealth he had accumulated provided a generous income for the artist well into his adult life.

As a child, Morris lived something of an idyllic lifestyle in his family's large country house near Epping Forest in Essex, surrounded by ancient woodland scattered with medieval architecture. He was sent to school at the prestigious Marlborough College in Wiltshire, where he claimed to have "learned next to nothing". Shirking his schoolwork, Morris spent his time reading, following his own interests, and exploring the landscape surrounding the school, including medieval churches and Neolithic monuments. Surviving letters from this period, written when Morris was as young as fourteen, reveal a deep love and critical appreciation of architecture. The sites and hobbies of his childhood would be carried with Morris for the rest of his life, influencing his design-work, and standing as points of repeated, nostalgic return in his writing.

In 1853, Morris began his studies in Theology at Exeter College, Oxford, planning to become a priest in line with his mother's wishes. However, within less than a year, his outlook on life had changed drastically: his reading in the library shifted from religious matters to history and ecclesiastical architecture, and eventually to the art criticism of John Ruskin. Soon, he discovered his lifelong passion for writing poetry, and his fate as a creative was sealed when he met fellow student Edward Burne-Jones, a budding artist and designer with whom he would remain friends for the rest of his life. Morris was connected to a group of students at Oxford known as the Birmingham Set, also including the mathematician Charles Faulkner and the poet Richard Watson Dixon, with shared interests in theology, medievalism, and the poetry of Alfred Lord Tennyson.

On graduating in 1856, Morris and Burne-Jones moved to London: Burne-Jones to work as a painter and designer of stained-glass, Morris to become an architect, a change of direction that was badly received by his family. Following his passions nonetheless, Morris started an apprenticeship. However, his career soon took another turn when he made the acquaintance of Dante Gabriel Rossetti, a founding member of the Pre-Raphaelite Brotherhood. This close-knit group, established by Rossetti, William Holman Hunt and John Everett Millais in 1948, had actually disbanded two years previously. But the influence of the Pre-Raphaelite aesthetic on British art would radiate across the following decades, thanks in part to the new creative triumvirate forged by the meeting of Rossetti, Morris, and Burne-Jones. Morris was swept up in a wave of artistic creativity, in the company of artists whose work focused on nature, and the romantic chivalry of the medieval past. These ideals were ones that Morris himself had championed since his childhood, and at last he found himself in company where he was free to explore them. Encouraged by Rossetti and Burne-Jones, Morris abandoned his architectural career and began painting in the Pre-Raphaelite style.

Morris threw himself into the bohemian lifestyle of the group, painting long-haired medieval women in natural landscapes similar to those found in Rossetti's watercolors - though Morris's paintings never received quite the same critical acclaim as those of his Pre-Raphaelite peers. In 1857, Morris, Rossetti, and Burne-Jones returned to Oxford to paint murals on the walls of the Union Library. The same year, Morris met Jane Burden, a beautiful, working-class girl who began to model for his and Rossetti's paintings. Morris fell in love with her, and by 1859 they were married.

Around this period, Morris's creative imagination was leading him beyond painting. He was interested in how the aesthetics and ethics of the Pre-Raphaelites - a love of nature, medieval aesthetics and Gothic architecture, a hatred of mechanization - might be applied across a wide range of artforms and applied crafts. At the same time, the artist yearned for a home outside the city in which he could raise a family. These ambitions converged in the design of "Red House", completed in 1860 in collaboration with the Gothic architect Philip Webb. Red House is an architectural masterpiece, encapsulating what became known as the Arts and Crafts aesthetic. Its sloping gabled roofs, painted brick fireplaces, and rambling cottage garden epitomized the new paradigm of beauty which the Pre-Raphaelites had defined in their paintings, but realized those ideals in three dimensions: this, in a nutshell, defined the Arts and Crafts philosophy. Situated close to London, Red House would become the country get-away of Morris's artistic acquaintances for the next five years.

After the house was built, Morris and his friends decided to decorate the interiors themselves, establishing through creative collaboration many of the principles of Arts-and-Crafts interior design. Burne-Jones designed the stained-glass windows, while Morris created the murals with help from Rossetti and other members of the wider Pre-Raphaelite circle. Around this time, Morris began to focus his attention on the wallpaper and textile designs which made him famous, some of which still survive in the house. This collaborative effort led to the founding of Morris, Marshall, Faulkner & Co., known as 'The Firm', an art and design company that championed hand-craftsmanship and traditional techniques with a strongly medievalist aesthetic. Members included Rossetti, Webb, and Burne-Jones, as well as P.P. Marshall, Charles Faulkner, and Ford Madox Brown. 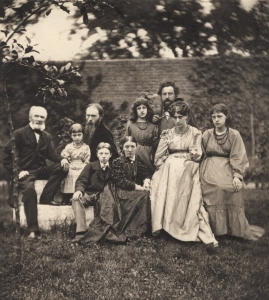 The Firm set up offices in London, and began to gain great commercial success. However, around this time, Morris's personal fortunes took a turn for the worst, and in 1865 he was forced to give up Red House, which was, in any case, inconveniently far from the Firm's headquarters in London. His marriage was also disintegrating: though he had lived happily with Jane and their two daughters at Red House for a time, she had recently struck up what became a long-term affair with Morris's friend and mentor Rossetti. Morris took solace in hard work and metered verse, and by the 1860s he had become one of the most famous poets in England. In 1871, he moved to a country house in Kelmscott in Oxfordshire with his wife, children, and, strangely enough, Rossetti. It has been surmised that Morris reluctantly allowed Rossetti to join them at Kelmscott for his wife's sake, but in spite of this remarkably magnanimous gesture, the domestic situation created tension between the pair, and Rossetti eventually left in 1874.

In 1875, Morris dissolved The Firm and set up Morris & Co, a company that continued trading for almost 50 years after his death. Although the company was liquidated in 1940, the British fabric and wallpaper manufacturer Sanderson & Sons purchased the design licenses, and so Morris's designs are still sold under his name today. He expanded the stylistic repertoire of floral wallpaper and fabric designs to an unprecedented degree, a mercurial inventiveness on which the commercial success of the company rested. Throwing himself into the theory and practicalities of the design process, he spent many hours learning how to print woodblocks and weave tapestries. Favoring medieval, artisanal techniques of dyeing and printing, his passion for the art of the past was also expressed through his co-founding of the Society for the Protection of Ancient Buildings, which protested against the restoration of historical buildings using modern methods. The society remains active today, and the ideas underpinning it - characterized by Morris as "anti-scrape" - are now widely accepted. 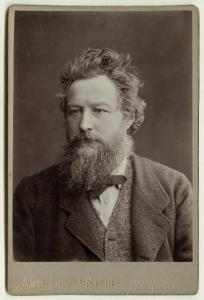 This was also a time of increased social consciousness for Morris. His views on craftsmanship, and his opposition to modern industrial methods, had already drawn him towards progressive causes. However, upon witnessing stark class inequalities across Europe, and becoming more well-versed in contemporary politics, Morris became a radical socialist. He wrote several popular books related to his cause, including the utopian socialist fantasy travelogue News From Nowhere (1890), and in 1874 founded a Socialist League in Hammersmith, West London, where the family had resettled in 1879. Like his undergraduate hero John Ruskin, Morris's political views were inseparable from his aesthetics. He believed that art should be produced and enjoyed by all; that the products of artistic labor should be offered back to the working classes. Morris spent the final years of his life in his new house in West London, affectionately referred to as Kelmscott House, in honor of his earlier country residence. In 1891, he launched the last of his many creative ventures, Kelmscott Press. He had long enjoyed creating intricately illustrated volumes of stories and myths, and he decided to set up a press which would produce beautiful illustrated books inspired by medieval ecclesiastical manuscripts. From that point onwards until his death in 1896, he divided his time between Kelmscott Press, his design work, and his socialist activism.

The Legacy of William Morris

The legacy of William Morris is as extensive as it is difficult to trace. His artistic and poetic skill, along with the radical new ethos on art and society that he espoused, sent shockwaves through the worlds of art, architecture, design, poetry, and political thought.

His most obvious impact was on the Arts and Crafts Movement, of which he is generally considered a founding father. Several of his friends and acquaintances, including his daughter May Morris, took up his mantle in the field of craft and design, while his work also resonated internationally, inspiring the development of Art Nouveau in France, as well as the North-American Arts and Crafts Movement.

His ideal of collaborative, artisanal community, exemplified by 'The Firm' and the construction of Red House, would inspire artists across the next century. Eric Gill would soon set up his own Catholic arts circle in Sussex, carrying forwards Morris's ideals of combining beauty and function through design and decorative lettering. Some decades later, the 1951 Festival of Britain took inspiration from Morris's socialist beliefs, and from his sense of the role of the community in artistic production, introducing these principles to a new generation of creatives including Terence Conran and Lucienne Day. The early-twentieth-century heyday of the artistic avant-garde was also in a very real sense preceded by the utopian collectivism of Morris's ventures.

The unity of architecture and decoration embodied in Red House also had an irrevocable effect on architectural philosophy across the coming decades, fundamentally influencing the way in which buildings were conceived and designed. Charles Rennie Mackintosh would expand on Morris's ideas by devising each of his buildings as a 'total work of art', in which décor, furniture, and architectural elements all fitted around each other. Even Frank Lloyd Wright and Walter Gropius, architects who produced sleek and refined modernist masterpieces, freely admitted the impact of Morris's work on their early development. Morris's thoughts on the relationship between country and city, meanwhile, and how the two might be combined, can be sensed in the socially egalitarian concept of the Garden City, borne out in early-twentieth-century project such as Welwyn Garden City.

Many contemporary artists still look back to Morris as an inspirational figure. Jeremy Deller and David Mabb, for example, have both commented on how Morris's work contrasts with and compliments the production methods and political ethos of much twentieth-century art.