Antony Gormley was born in London in 1950 to a German mother and Irish father. A wealthy family, Gormley's father owned a pharmaceuticals company which was famously the first to work with Alexander Fleming to commercially produce penicillin. Gormley grew up in the family home his father had built in Hampstead Garden Suburb, where they had a chauffeur, cook and several household assistants to take care of them. Gormley has, however, hinted in interviews that his parents' strict, Catholic beliefs played out in harsh forms of discipline. Despite this, Catholicism informed the spirituality of some of Gormley's later pieces, as he explained in an interview, "If you are brought up a Catholic you may lose your Catholicism but the fact is it has marked you for life. And the need to replace its belief system with something else becomes your life's work."

Looking back, he likens the static, rigid bodies of his mature art to several childhood memories. One was the "enforced sleep" his parents imposed on him as a young boy, instructing him to lie down in his bedroom at 3pm in the afternoon. As he remembers, "I was never tired enough to sleep, so I would lie there and tell myself I couldn't move. And it was mixed with a certain kind of fear - somebody's coming and if I move they're going to kill me, so I'm not going to move..." He also cites the "terrible claustrophobia" he suffered as a child as a precursor to his still, stiff bodies, particularly after he was sent to a Catholic boarding school, where tightly cornered bedclothes closed him in.

At Ampleforth, Yorkshire's Benedictine boarding school, Gormley quickly discovered a natural inclination towards the arts, with a particular liking for carpentry and furniture making. He won various school art prizes, painted a mural in the school grounds when he was just 13 and even sold a series of paintings to the monks who taught him, demonstrating the talent and self-assurance that would catapult him into the spotlight as an adult.

Although Gormley had his sights set on art school, his parents pushed him towards academia; he recalls their attitude towards education, "The most important thing was that you had to have a job and not be a burden either on your parents or the state." His first degree was in archaeology, anthropology and history of art at Trinity College, Cambridge, begun in 1968. While there he met and befriended various prominent figures within the arts including artists Michael Craig Martin and Barry Flannigan, as well as former Tate director Nicholas Serota, who would give Gormley a major solo show at London's Whitechapel Gallery years later.

Gormley's interest in making art continued throughout his degree as he found paid work painting murals for university balls, nightclubs and private parties. Following his graduation in 1971, this work earned him enough to go travelling around India and Sri Lanka on the hippie trail for the next couple of years. While travelling, Gormley went on a spiritual quest, learning meditation and considering whether or not to become a Buddhist monk, but he eventually found his desire to be an artist was stronger. The huge number of drawings he made during this period, documenting the people, animals and architecture around him were impressive enough to earn him a funded place at art school.

Initially studying sculpture at London's Saint Martin's School of Art, Gormley's first figurative sculptures were based on the homeless people he had seen sleeping under blankets on the streets or railway platforms of India. He made casts of his friends' bodies while lying down under a blanket. Emphasising the importance of this stage in his creative development he states firmly, "There's no question that they carry in seed everything that has happened since."

Moving on to Goldsmiths University, Gormley remembers finding a great sense of humility, saying, "Goldsmiths caused me pain, trouble and great inspiration. I realised when I got to art school that I didn't have a clue what I was doing. Irrespective of whether art can be taught, art school is where you learn from everyone around you. I'd say it's essential for an artist." After graduating from Goldsmiths, Gormley went to study at the Slade School of Fine Art, where he met his future wife, the painter Vicken Parsons.

Gormley's breakthrough came in 1981 with Bed (1980-81), in which 8,640 slices of bread were stacked to create the size of a double bed, while Gormley ate out a section in the centre to match the proportions of his body. Nicholas Serota was the director of the Whitechapel Gallery at the time, and he chose to display Gormley's Bed in a two person show with British sculptor Tony Cragg.

Gormley then moved onto producing figurative sculptures, mainly in lead, which he would later abandon after discovering it was poisoning him. He first began making early body castings during this time, using his own body as a spiritual signifier for all people, particularly when multiplied, as seen in works such as Three Ways, and Land, Sea and Air II (1982). Gormley's wife became his primary studio assistant, helping him cover his entire body with plastic food wrap and plaster in a gruelling and lengthy process of creation. He remembers the unrelenting support she gave him in achieving his dreams: "Right through those early days when it wasn't looking as if it was going to work out - my God, you know, we had three children...[and] Vicken quietly accepted whatever came along...did all the moulding, did the lion's share of the child rearing and never stopped working herself."

Even after the Whitechapel show's positive reception, Gormley was still struggling to get by, with a shabby studio in Peckham and few commercial sales. Taking on teaching work a few days a week at various art schools helped, particularly while he and his wife were raising a large family. Suffering the financial strains of producing body casts proved challenging for Gormley and he later admitted his collaborative and much-loved work Field (1989-2003), was born from this period of struggle; sculpting from clay, and involving others in the process of making, seemed a more affordable and egalitarian option.

In 1993 art dealer and gallerist Jay Jopling signed Gormley with his commercial White Cube Gallery, leading to a period of financial security. Gormley also received commissions to produce various public artworks throughout the 1990s. These were often composed of figure groupings placed apart, yet in harmony with one another, opening up meditations on the human relationship with the natural world. These ideas prompted critical comparisons with land artists including Robert Smithson and Walter de Maria, although it was clear Gormley's ability to bring the internal and external spaces that surround the human body into his art set him apart from his peers. In 1994, Gormley won the Turner Prize for his ongoing work with Field. Three years later he was awarded an OBE for services to British sculpture. 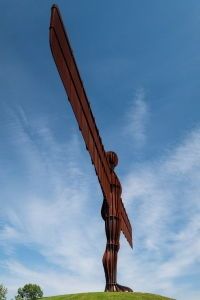 Following his Turner Prize win Gormley was commissioned to create The Angel of the North, begun in 1994 and completed four years later. As Britain's largest, and perhaps most famous public artwork, it stands at the site of a disused collier and has become a powerful symbol of stability and endurance. On a recent visit to the site he observed, "... people are spreading ashes, leaving tokens for lost loved ones ... It's clear that the work is doing something that people need to be done."

With his three children grown up and pursuing careers within the arts, Gormley now has several large, factory style studios in England, including one in north London near Kings Cross designed by David Chipperfield, and one in Hexham, Northumberland. Both of these employ multiple assistants to help keep up with the influx of commissions and exhibitions he receives. Gormley has found distancing himself from the process of making gives him greater opportunity to contemplate the conceptual aspects of his practice, as he explains, "I used to go to bed exhausted from beating lead and mixing plaster. Now that extreme physical exertion of making sculpture is shared with my assistants; perhaps that allows me to see the work more ruthlessly. When you've invested an enormous amount of physical and emotional energy in a piece of work, it can be difficult to judge it objectively. I think I'm in a better position to do it now, and it's a huge pleasure and privilege to be surrounded by such ambitious, sensitive, intelligent people."

Recent projects by Gormley have become more ephemeral with figures made from delicate tangles of wire or geometric blocks that slot into one another like a puzzle. He has also embraced new technology and in early 2019, he collaborated with astrophysicist Priyamvada Natarajan and Acute Art to create Lunatick (2019), a virtual reality experience that allows viewers to fly over the surface of the moon. Both he and his wife continue to pursue their independent practices, although he has spoken of the impact she has had on his career, saying, "I couldn't have done what I have done without Vicken's help. My lover, muse, assistant - she is the maker of my life, really."

The Legacy of Antony Gormley Given the introspective, meditative quality of his art, Gormley has tended to be a somewhat lone figure who has not been associated with any one specific art movement. He rose to prominence, however, during a vibrant time as the Young British Artists (YBAs) brought the British art scene to international attention in the 1990s. Although the YBAs are most prominently remembered for their shock tactics, many also emphasized their own bodies in their work, using them as universal signifiers for the human experience and this overlaps with the physical immersion and interactivity of Gormley's practice. This can be seen in Sarah Lucas' 'laddish' self-portraits and bodily sculptures, and in Tracey Emin's brutally honest self-exposure through printmaking and tapestry. Gormley's ability to combine a Minimalist language with an awareness of the body also connects him to various Post-Minimalist artists including Rachel Whiteread and Mona Hatoum, who have also sought ways of bringing psychological tension and traces of human presence into geometric arrangements.

Glasgow School of Art's Environmental Art course, established by David Harding in 1985 also helped to promote British sculptural practices and many graduates have extended ideas first explored by Gormley. Nathan Coley's large-scale public artworks, for example, explore the ways we react to our surroundings, with loaded phrases that invite deeper contemplation about our place in the world, connecting with the spiritual strand of Gormley's art. Similarly, Martin Boyce's geometric, angular sculptures reference the contemporary industrial environment, while opening it out into an imaginative, magical realm, recalling the play between gritty materiality and Buddhist thought in Gormley's public sculptures.

Many of Gormley's large-scale public art installations have become extremely well-known and iconic symbols of towns or regions, with local people actively identifying the works with the locations in which they've been placed. The most famous of these is The Angel of the North, but other examples include Another Place at Crosby Beach, Merseyside and 6 TIMES (2010), a series of sculptures running along the Waters of Leith in Edinburgh.