Paul Cézanne was born in 1839 in the town of Aix-en-Provence in the South of France. His father was a wealthy lawyer and banker who strongly encouraged Paul to follow in his footsteps. Cézanne's eventual rejection of his authoritative father's aspirations led to a long, problematic relationship between the two, although, notably, the artist remained financially dependent on his family until his father's death in 1886.

He was extremely close friends with Émile Zola, a writer born in Aix as well, and who would later become one of the greatest literary figures of his generation. The adventurous Cézanne and Zola were part of a small circle that called themselves "The Inseperables". They moved to Paris together in 1861.

Cézanne was largely a self-taught artist. In 1859, he attended evening drawing classes in his native town of Aix. After moving to Paris, Cézanne twice attempted to enter the École des Beaux-Arts, but was turned down by the jury. Instead of acquiring professional training, Cézanne made frequent visits to the Musée de Louvre, where he copied works by Titian, Rubens, and Michelangelo. He also regularly visited the Académie Suisse, a studio where young art students could draw from the live model for a very modest monthly membership fee. While at the Académie, Cézanne met fellow painters Camille Pissarro, Claude Monet, and Auguste Renoir, who were at that time also struggling artists, but who would soon comprise the founding members of the nascent Impressionist movement. The early oils of Cézanne were executed in a rather somber palette. The paint was often applied in thick layers of impasto, adding a sense of heaviness to already solemn compositions. His early painting indicated a focus on color in favor of well-delineated silhouettes and perspectives preferred by the French Academy and the jury of the annual Salon where he continuously submitted his works. All of his submissions, however, were refused. The artist also travelled regularly back to Aix to secure funding from his disapproving father.

The year 1870 marked a crucial shift in Cézanne's painting which was occasioned by two factors: the artist's move to L'Estaque in the South of France to avoid the military draft, and his closer association with one of the most distinguished young Impressionists - Camille Pissarro. Cézanne was fascinated with the Mediterranean landscape of L'Estaque, with its abundance of sunlight, and the vibrancy of colors. Meanwhile, Pissarro proved instrumental in persuading Cézanne to adopt a brighter palette, as well as to abandon the heavy and ponderous impasto technique in favor of smaller and livelier brushstrokes. In L'Estaque, Cézanne executed a series of landscapes dominated by the architectonic forms of the rural houses, the dazzling blues of the sea, and the vivacious greens of the foliage.

In 1872, Cézanne returned to Paris, where his son Paul was born. His mistress, Hortense Fiquet, would finally become Madame Cézanne in 1886, notably just following the artist's father's death. Cézanne painted over forty portraits of his companion, as well as several enigmatic portraits of their son.

In 1873, Cézanne exhibited in the Salon des Réfuses, the notorious show of artists who had been refused by the official Salon (he counted himself among a circle that included Édouard Manet, Claude Monet, and Camille Pissarro, among others). The critics slammed the avant-garde artists, which apparently hurt Cézanne deeply. In the next decade he mostly painted away from Paris, in either Aix or L'Estaque, and he no longer participated in unofficial group exhibitions. Cézanne's experience with painting from nature and rigourous experimentation led him to develop his own approaches to art. He strove to depart from the portrayal of the transient moment, long favored by the Impressionists; instead, Cézanne sought true and permanent pictorial qualities of objects around him. According to Cézanne, the subject of the painting was first to be "read" by the artist through the understanding of its essence. Then, in the second stage, this essence must be "realized" on a canvas through forms, colors, and their spatial relations. The colors and forms thus became the dominant elements of his compositions, completely freed from the rigid rules of perspective and paint application as promoted by the Academy. 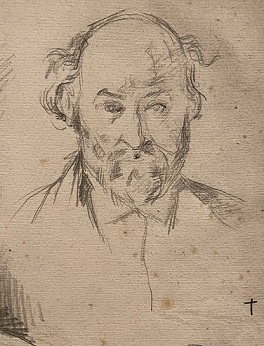 Depicting reality as such was never Cézanne's primary objective. In his own words, it was "something other than reality" that he endeavored to reveal. In the 1880's, Cézanne executed a large number of still lifes, completely reinventing the genre in the two-dimensional mode. The central feature of these still lifes was the crucial shift of attention from the objects themselves, to the forms and colors that were potentially communicated by their surfaces and contours.

Cézanne's portraits, including an extensive body of self-portraits, exhibit the same set of traits. The compositions are vividly impersonal, for it was not the sitter's character that Cézanne struggled to depict but the formal and coloristic possibilities of the human body and its interior nature. In the last decade of his life, Cézanne limited his artistic pursuits almost exclusively to two pictorial motifs. One was the depiction of the Mont Sainte-Victoire, a dramatic mountain that dominated the parched and stony landscape at Aix. The other was the final synthesis of nature and the human body in a series of so-called Bathers (nudes depicted frolicking in a landscape). The later versions of the Bathers were becoming increasingly abstract in regard to how form and color seemed to fuse together on the canvas.

After contracting pneumonia, Paul Cézanne died in his familial house in Aix on October 22, 1906. The last decade of his life had been marred by the development of diabetes and severe depression, which contributed toward alienating the artist from most of his friends and family.

The Legacy of Paul Cézanne When looking at Cézanne's late work, it is impossible to miss the emergence of a unique artistic approach. Cézanne offered a new way of comprehending the world through art. With his reputation evolving steadily in the late years of his life, an increasing number of young artists fell under the influence of his innovative vision. Among them was the young Pablo Picasso, who would soon steer the Western tradition of painting into yet another new and utterly unprecedented direction. It was Cézanne who taught the new generation of artists to liberate form from color in their art, thus creating a new and subjective pictorial reality, not merely a slavish imitation. The influence of Cézanne continued well into the 1930s and 1940s, when a new artistic manner was coming to fruition - that of Abstract Expressionism.