Environmental art, also known as ecological art, encompasses several different forms and practices that engage with, and represent the environment. It is distinct in its less specific time period and greater scope of art. As Professor John E. Thornes noted, "Environmental art is [...] a new genre to describe works of art that are not only directly representational of the environment (the 19th century wonders such as John Constable's Cloud Series, Claude Monet's London Series, or Paul Cézanne's Mont Sainte Victoire Series), but also works of art that are clearly nonrepresentational and performative in terms of much less direct interpretation but more active engagement of the audience such as Richard Long's A Line Made by Walking or James Turrell's Skyspaces. The natural world has always provided artists with inspiration, as both background matter and central focus, its beauty providing an ever-present sense of awe weaving through the centuries. The European High Renaissance artists often celebrated the harmony of the natural world in their compositions and sought to replicate its balance. Later, Naturalist painters such as John Constable contrasted images of houses and agricultural detail with realistic depictions of British landscape. Influenced by Constable, painters from the French Barbizon School strove to represent real life in and amongst nature: The Gleaners by Jean-François Millet is one of this school's most celebrated works in its portrayal of people working on the land. In the 19th century, Impressionists challenged the distinction between the focal point and the background of a painting with more informal compositions, so that paintings felt like snapshots of a moment rather than static images. Monet's plein air paintings notably captured his immediate surroundings: his famous Water Lilies series from the beginning of the 20th century is testament to this. In America, in the 19th century, the Hudson River School was central to the development of a particular aesthetic as painters like Thomas Cole explored how to represent the marvelous idiosyncrasies of the new continent.

However, in thinking about the traditional composition of landscape paintings, some critics and artists began to see that this form made nature too picturesque and too controlled: what we viewed in a landscape was not nature in and of itself but a version of nature as seen through the eyes of the painter. This created a landscape category all of its own, and it was only logical that artists would evolve their perception of the world from mere subject matter to an actual entity of which we would begin to contemplate our various relationships. As artists began to explore the presence of humanity in this regard, they began to consider our physical engagement with, and sometimes opposition to our natural world.

In the early 20th century, as many artists moved away from realism, they also moved away from depicting natural landscapes in the mode of prior eras. Instead of a subject matter on canvas, some artists began to produce more conceptual work that took place out in nature, or used nature as a key medium in their work. These projects emphasized location, materials, and process over preconceived ideas about a final piece. Artist Joseph Kosuth wrote Art after Philosophy in 1969 as a means of critiquing the dominance of modernism in the art world, and asking artists to rethink the possibility of what art could do and how an audience could respond. Artists such as Joseph Beuys and Sol LeWitt, produced complex and layered works that moved from the gallery space to new and innovative locations. Land art or Earth Art was an important avant-garde art movement in the 1960s and 70s pioneered mainly by American artists. It developed through Minimalism, which championed a new simplicity as well as an increasing frustration with the control and hierarchy of the mainstream art market. It also had much in common with Conceptual Art in its prioritizing of process over execution. Many young artists at the time were bothered by the restrictions of the gallery space, and the counter-culture movement was encouraging individuals to rethink structures of power and how to successfully operate outside of them. Artists began to look for spaces in urban wastelands and deserts to host different kinds of work, some of surprising composition and size. Robert Smithson's Spiral Jetty (1970) is considered a central piece of Land Art; in his creation of an enormous spiral in a salt flat in Utah, Smithson invoked the grand scale and size of nature itself. Smithson, along with other artists such as Nancy Holt, Michael Heizer, and Walter de Maria created works using stone, rock, soil, and sand.

However, as English writer and painter Adrian Henri wrote, if "the major works of the new earth art are American ... Holland seems to be a natural home for environmental art." For Henri, Environmental art was a much more European affair. Its artists were not producing enormous works in the desert à la American Michael Heizer's Double Negative (1969-70), and were not necessarily responding to the critiques of American counterculture. Instead, Environmental art sought to more readily use and work in tandem with natural materials. In fact, Robert Smithson and others were critiqued for the environmental damage caused by their works: techniques like cutting chunks out of the earth, drilling, digging, and moving heavy duty materials such as stone did not adequately demonstrate a concern for the impact of humans on nature.

These critiques were born out of an emerging, worldwide environmental consciousness. Rachel Carson's 1962 book Silent Spring documented the impact of pesticides on the natural world. It predicted the impact on the use and accrual of harmful chemicals in animals and insects, and made suggestions for pesticide alternatives and pest-reducing strategies. The book had a huge impact on public consciousness about the influence of human beings in the natural world, and saw the formation of several environmental justice and campaign groups. In 1970 Richard Nixon's government established the Environmental Protection Agency as a means of addressing many of the concerns raised by Carson's text. That same year saw the creation of Earth Day, celebrated annually on the 22nd of April. The day was created in order to draw attention to the wide variety of environmental challenges facing the globe. The first Green Parties were also established around that same time in order to take concerns voiced by environmental justice groups and concerned individuals into mainstream politics. Since then, climate change and global warming have become increasingly central to the manifestos of other political parties, as scientists warn of the very serious impact environmental change will have on the day-to-day life of people around the globe.

At the center of Environmental art is the complex question of how (and if) the environment and landscape can be represented in art. Professor John E. Thornes makes the distinction between art that seeks to replicate the world and art that replicates the experiences of being in the world. In identifying these differences Thornes exposes the problem inherent within the notion of "representation": is there only one way of experiencing our environment? Can we separate representation from experience? Much Environmental art wrestles with these issues: in the careful planning and making of Agnes Denes' work Tree Mountain - A Living Time Capsule (1982), what can we say is truly being "represented'? The piece, which is made up of 10,000 trees planted in a mathematically exact pattern, is meant to take 400 years to grow. In this ambitious plan, can we say that nature is being represented? It seems instead, that rather than questioning the ability of rendering something true to life, Environmental art seeks to transform the very basis on which we experience art, whether in terms of scale, time, or affect.

Using natural materials and the processes of nature are very important to aspects of Environmental art. Artists often use things that will grow such as seeds, flowers, and algae; material that might decay like wood and leaves; and the very elements themselves that are subject to change like water and fire. In doing so, Environmental art draws attention to the natural processes that underpin every aspect of life, and remind viewers that we ourselves are privy to those same transitions. These works can sometimes only be displayed once or temporarily. This means that the artworks themselves become experiences, or indeed documentation of experience. Toshikatsu Endo, for example, often burns his pieces and then photographs the process, displaying the results afterwards. Peter Hutchinson's Particutin Volcano Project (1970) saw the artist place white bread on an active volcano in order to photograph the sped-up moldering process. British artist Andy Goldsworthy famously uses materials from his immediate environment in order to celebrate the aesthetics, variety, and beauty of the natural world. Natural materials harness an immediacy and proximity to our day-to-day lives that had not yet been seen in art.

Environmental art has a very interesting relationship with the notion of an audience, or even a single viewer, as artworks are often in specific, and sometimes hard to reach places. Artists often document the process rather than the finished product. This affects the ability of individuals to see a specific iteration of the work and causes them to rethink their expectations of the limits of an aesthetic experience. In considering the idea of an audience in their pieces, artists ask questions about fame and legacy: if art does not last forever, or more specifically, does not let the artist live on through their achievements, what other significance can it have?

In the 1990s and early 2000s, more and more Environmental artists started to consider the actual legacy and impact of art in the environment, and how their work could actively draw attention to specific issues occurring in otherwise unseen or unrecorded places. The term "ecovention" was coined by artist/curator Sue Spaid and curator Amy Lipton to define art that had a much more specific function than simply representing an idea, but that was an "intervention" of some kind to aid in the improvement of a particular issue. The two curated an exhibition at the Contemporary Arts Center in Cincinnati around this idea, featuring various examples of environmental work, and wrote an accompanying book, solidifying this term as a distinct aesthetic movement. 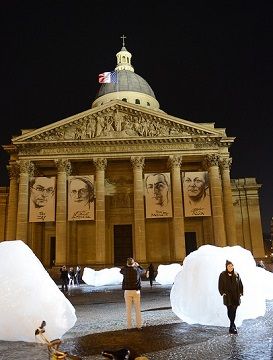 Environmental art has had a substantial impact on Installation and Public Art in the usage of material or inspiration drawn from nature and natural events. In recent years work by artists such as Olafur Eliasson and Ann Veronica Janssens have shown the direct influence of the fleeting experiences of Environmental art through the creation of fabricated natural experiences in the gallery space. Eliasson's work, The Weather Project (2003), for example, replicated the experience of an enormous setting sun within the Tate Modern's iconic Turbine Hall, bringing the sky inside. Art group Random International toured the world with their Rain Room (2012), in which the audience walked around and through a digital installation that simulated rain. Janssens's yellowbluepink (2015) played with the more sensual aspects of living amongst nature through his room filled with colored mists that transformed the attendee's spatial perception.