Henri-Emile-Benoit Matisse was born to middle-class parents Emile-Hippolyte-Henri Matisse, a grain and hardware merchant, and Anna Heloise Gerard. He grew up in Bohain-en-Vermandois and went to school at the College de Saint Quentin, before moving to Paris to study law. In 1889, he returned to Saint-Quentin as a law clerk, though he found the job tedious and complained of anxiety. Later that year he contracted appendicitis and spent several months at home recovering. During that time, at the age of 20, he discovered the welcome isolation and freedom of painting.

Struck by his new passion, Matisse left for Paris again in 1891, this time to study art. He failed the entrance exams for the Ecole des Beaux Arts, but unofficially joined the studio of French symbolist painter Gustave Moreau in 1892. Moreau told his students, "Colors must be thought, dreamed, imagined." This Symbolist attitude toward painting contributed to Matisse's expressive use of color. In 1894, Matisse unexpectedly had a daughter, Marguerite, with his lover, Caroline Joblaud. After finally being accepted to the Ecole des Beaux Arts in 1895, he continued to study with Moreau until 1898. Many styles influenced the painter during these years, from the academic still lifes of Jean-Baptiste-Simeon Chardin to the loose brushwork of the Impressionists. In 1898, having ended his relationship with Caroline, Matisse married Amelie Parayre. Moreau died while the couple was abroad for their honeymoon, and Matisse struggled to find another teacher. He was also faced with the challenge of raising three children - he and his wife had two sons, Jean in 1899 and Pierre in 1900. Despite their financial struggles, Matisse began his lifelong collection of avant-garde art, purchasing Three Bathers (1879-82) by Paul Cézanne from the gallery of Ambroise Vollard. Influenced by the Post-Impressionists' use of color, and the writing of art critic Paul Signac, Matisse moved past his Impressionist exploration. 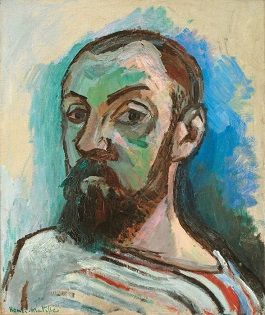 Matisse spent summer 1905 in Collioure, working with André Derain to create a new style of pure colors and bright light. The new style became known as Fauvism, after critic Louis Vauxcelles described the arrangement of works at the Salon d'Automne in 1905 - an important showcase for the new movement - as "Donatello among the wild beasts [fauves]." Matisse was soon known as the Fauvists' leader in the press, called "chief fauve" by Louis Vauxcelles and other critics. The Fauvist movement, though short-lived, forged one of modern art's two directions. In 1905, Matisse met Pablo Picasso at the studio of Gertrude Stein. The two artists began a lifelong friendship and rivalry, each artist representing a possible direction modern art could take after the death of Paul Cézanne. While Picasso deconstructed objects into Cubist planes, Matisse sought to construct an object's form through color.

By 1907, painters were no longer working in the Fauve style, not even Matisse. He moved on to create simplified forms against flat planes of color. His interest in sculpture intensified as well, especially North African work, probably due to his experiences on a 1906 trip to Algeria. He used sculpture to resolve pictorial problems, especially those relating to the figure. He also acquired the support to open an art school in 1908, teaching approximately eighty students over three years. And he gained patronage from collectors of avant-garde art, including the Russian collector Sergei Ivanovich Shchukin, who eventually owned dozens of his paintings. 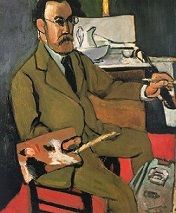 From 1911 to 1916, Matisse focused on depicting the human figure in interior spaces decorated with Eastern rugs and souvenirs. While he was not drafted during World War I, the seriousness of world events affected his painting, muting his palette. Towards the end of the war, however, he returned to his bright colors, leading to his "Nice period" from 1917 to 1930. Many of these paintings make use of the white of the exposed canvas to suggest the bright light of southern France.

In 1930, Matisse went through a time of artistic crisis and transition. Dissatisfied with the conservative direction of his work, he traveled first to Tahiti, then to America three times in three years. He spent much less energy on easel painting, instead experimenting with book illustration, tapestry design, and glass engraving. In 1931, he was commissioned to create a mural for the Barnes Foundation in Pennsylvania, which he completed in 1933.

Matisse's separation from his wife in 1939, the arrival of World War II, and ill health, all added to Matisse's anxiety over the direction of his work. After major surgery in 1941, he was confined to a wheelchair. He turned to drawing and paper cut-outs, media that were physically more manageable and offered new potential for expression. Paper cut-outs symbolized for Matisse the synthesis of drawing and painting.

The paper cut-outs encouraged Matisse to simplify forms even further, distilling the object's "essential character" until it became a symbol of itself. He used the paper cut-out technique to design stained glass windows for the Chapelle du Rosaire in Vence, France, and as a medium in its own right in large-scale works. With the help of assistants, Matisse was able to continue working through his illness. On November 3, 1954, Matisse died of a heart attack.

The Legacy of Henri Matisse 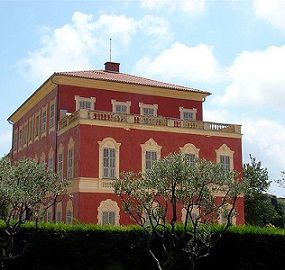 Scholars in the 1950s described Matisse and Fauvism as a precursor of Abstract Expressionism and much of modern art. Several Abstract Expressionists trace their lineage to him, though for different reasons. Some, like Lee Krasner, are influenced by his various media; Matisse's paper cut-outs inspired her to cut up her own paintings and reassemble them. Color field painters, such as Mark Rothko and Kenneth Noland, were taken with his broad fields of bright color, as in the Red Studio (1911). Richard Diebenkorn, on the other hand, was more interested in how Matisse created the illusion of space and the spatial tension between his subject matter and the flat canvas. Others, like Robert Motherwell, did not show Matisse's influence directly in their artwork, but were influenced by his view of painting color and form. Matisse's art continues to beguile not only artists, but also collectors, who have bought his paintings for as much as $17 million. And as several recent and upcoming blockbuster exhibitions suggest, he continues to be a favorite of the public worldwide.