A New Era for American Art

With the end of the Civil War and a new era of American prosperity, the wealthy built large houses to showcase their success. In order to demonstrate their cosmopolitan taste, they furnished these mansions with furniture and art imported from Europe. Although American artists such as the Hudson River School and the Tonalists had developed distinctively national styles, their paintings did not command the prices of European art; American art was not considered fashionable or sophisticated. To become a respected artist, it was necessary for Americans to train in the famous art schools of London and Paris and adopt the academic styles taught there. By the 1870s, however, academicism was being threatened by the emerging avant-garde, particularly in France. The Impressionist group first showed together in 1874. Although their styles and intentions were diverse, the Impressionists were united in rejecting the traditional Parisian Salon and its stale academic tradition. In general, an Impressionists' aesthetic emerged that was notable for the use of loose brushwork and experimental color composition, with a new focus on the effects of light. Furthermore, the Impressionists were interested in these optical effects rather than narratives; they privileged scenes of everyday life and natural beauty over the highbrow subjects of traditional painting.

Interestingly, both visiting American artists and the buying public in the US rejected Impressionism, even as the style gained critical attention from French critics. The Americans, who had been indoctrinated in the tenets of academic art found Impressionism too radical in its rejection of fine art. For much of the 1870s and 1880s, American artists in Europe followed more traditional styles of painting, which remained popular (and salable) at home. These decades saw the beginnings of an active art market in the U.S., where an increased number of art dealers began showing works by American artists and established names from Europe. The market favored artists who offered an American version of European painting trends, blending a certain nationalism and cosmopolitanism. During these years, a number of art magazines and periodicals were established, allowing both connoisseurs and amateurs to follow artist developments at home and abroad. In time, the American hesitancy about Impressionism began to soften, particularly as viewers became more accustomed to the abstractions of the style. A few intrepid American artists were among the first foreigners to embrace the innovations of French Impressionism (notably Mary Cassatt, John Singer Sargent, and James Abbott McNeill Whistler) and their works became popular back home. Then, as works by the French Impressionists arrived in the U.S., they found support within a small group of Americans who became the first major purchasers of the style.

While most American artists initially rejected the Impressionist style, there were a few key exceptions. Whistler and Sargent found in Impressionism an approach similar to their own explorations of color and everyday subject matter. American born, Whistler spent most of his career in London, but he maintained strong connections with Paris, where he had trained. He was even invited by Edgar Degas to exhibit his work with the first French Impressionist exhibition of 1874, (an offer Whistler refused). Whistler had several important patrons and influential acquaintances in the United States, including the painter William Merritt Chase. Sargent, another American who trained in Paris and lived in London, was also a conduit for Impressionism to reach American audiences. Sargent made several professional trips to the US, where he painted a number of well-received portraits and works in the Impressionist style. Since neither Whistler nor Sargent fully embraced the Impressionist movement, preferring to maintain their independence, Mary Cassatt became the first and most notable American Impressionist, helping to popularize the style. Born in Pennsylvania, she moved to Paris in 1866 where she became firmly embedded in the Impressionist movement in Europe and was most closely associated with Degas. She exhibited her work with the Impressionist group several times and remained in France until her death in 1926. The sale of her paintings to American clients did much to create the demand for Impressionist works in the U.S.

Impressionism became more fashionable in America during the 1880s, as many artists adopted its aesthetic and subject matter. Many American artists lived cosmopolitan lives, traveling to Europe frequently to see exhibitions and discover new techniques and trends. Also important was the influential art dealer Paul Durand-Ruel who befriended Claude Monet and had championed the Impressionists for many years. Having previously exported Impressionism to London, where his gallery expanded in 1870, he organized the first exhibition of Impressionist art in the U.S. in 1883, sending works by Manet, Monet, Renoir and Pissarro to Boston. Seeing the growing American market of art collectors, in 1886, Durand-Ruel organized a similar but larger show in New York City. That show caused a sensation, prompting artists, collectors and critic to reconsider their initial opposition to the style. 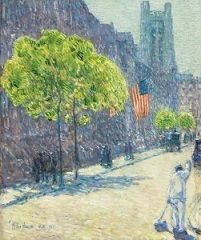 Impressionism quickly became a popular style, its varied aesthetic allowing American artists to experiment with the principles of the movement and adapt it for American subjects and audiences. Artists such as William Merritt Chase, Edmund C Tarbell and Childe Hassam painted parks, gardens and the countryside around New York and Boston, adding a recognizably American sensibility to the European style.

Artists' Colonies in the Northeast

During the 1890s, a number of artists' colonies were established; American Impressionism flourished in these bohemian enclaves. Working in these collaborative villages, artists learned from each other and shared ideas and resources. They were often established in areas of great natural beauty, but within an easy journey of a large city where work could be exhibited and sold. Notable groups of artists gathered at New Hope, Pennsylvania, and at Cos Cob and Old Lyme in Connecticut, as well as on New York's Long Island. On the other side of the United States, American Impressionist artists also worked at Carmel and Laguna Beach in California. Many of these colonies were inspired by Monet's famous garden and studio at Giverny in France, which had become a pilgrimage site for many American artists. Sometimes, wealthy patrons and collectors invited artists to their country homes, resulting in smaller-scale groups, such as the Blaney family who played host to Childe Hassam, John Singer Sargent, and John Leslie Breck at Ironbound Island in Maine. American Impressionism was first organized into a movement with the formation of "The Ten," a group of painters who opposed the more traditional Society of American Artists. In January 1898, they announced their resignations from the society, following the French Impressionists' rejection of the official Salon. The group consisted of Childe Hassam, J. Alden Weir, John Twatchman, Robert Reid, Willard Metcalf, Frank W. Benson, Edmund C. Tarbell, Thomas W. Dewing, Joseph R. De Camp, and Edward Simmons. William Merritt Chase also joined the group some years later. Although some of these artists were less notable, and some key American Impressionist artists (such as those living in Europe) were excluded, the group provided a centralizing locus for American Impressionism as a movement.

The intention of French Impressionism was to capture a fleeting snapshot, or a representation of the artist's perception of a place rather than an accurate study. The Impressionists didn't choose overly romantic or fantastical locations for their paintings, but instead focused on everyday spaces, such as cities, gardens, and places of popular entertainment.

When Impressionism came to America, artists were similarly interested in capturing fleeting impressions and in depicting scenes of everyday life. However, they were also interested in something beyond the aims of their French counterparts, which was capturing places that offered a sense of national identity. For many artists, such as Childe Hassam, painting scenes of American nature offered a chance to differentiate their work from European Impressionism. It also provided continuity from the Hudson River School, which had celebrated the American landscape as a point of national pride and glory. By depicting the natural wonders of the country, especially those found around some of the artist colonies established in the 1880s, American painters developed a patriotic Impressionism.

Interiors and domesticity were key themes for many American Impressionists, as they were for their French counterparts (notably Berthe Morisot and Edgar Degas). Patrons embraced the colorful and harmonious images of domestic tranquility, often as an antidote to the harsher realities of industrial and urban life. Mary Cassatt's paintings of intimate interiors and female companionship inspired American Impressionists of both genders. The paintings of Edmund Tarbell demonstrate the influence of these examples of quiet domesticity and the beauty of simple scenes from everyday life.

Like their French predecessors, many American Impressionists painted scenes set in gardens and parks. However, whereas Monet's garden paintings were often based on the vibrant colors and unusual compositions they offered (privileging form and color over subject matter), many Americans were more deeply inspired by the example of Renoir, who focused on the changing social interactions that took place in these spaces. In the work of Edmund Tarbell or William Merritt Chase, for example, these spaces offered a backdrop for women at leisure, enjoying nature in a controlled and safe environment. An extension of the beautiful interiors and domestic representations of the home, gardens and parks were carefully curated to provide a setting of luxuriant calm and tranquility.

After a meteoric rise in popularity and prestige, American Impressionism quickly replaced academic art as a favorite of collectors. Its soaring prestige, however, was quickly halted by the 1913 Armory Show, which featured more experimental art from Europe (including the Fauves and Cubists) and America (including the abstractions of the Stieglitz circle of artists and the realism of the Ashcan School). For many collectors of modern and contemporary art, American Impressionism became outdated and conservative.

Yet, despite its fall from the avant-garde, many artist colonies where American Impressionism had flourished continued to be key centers into the 1920s. Many artists, such as Childe Hassam and William Merritt Chase continued to work in the style, patronized by an older market which demanded more visually pleasing works rather than the conceptual avant-garde styles.