Jean-Louis-André-Théodore Géricault was the only child of wealthy, conservative parents. His father was a lawyer and his mother's family were tobacco growers. When he was four his family moved to Paris, which allowed Géricault to be educated in the most prestigious schools. At age fifteen, his drawing talent was recognized and he began to seriously study art.

Géricault's early years were not without loss. His mother died in 1808, even before he graduated from secondary school. The death of his grandmother four years later resulted in his being left a significant annuity that would allow him to live comfortably and gave him the independence to pursue his art without any financial worries. 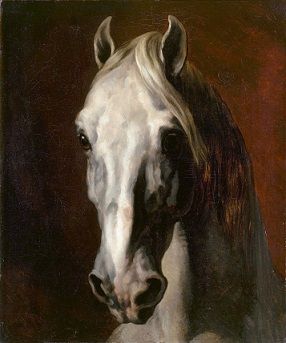 Géricault was fortunate to have trained with Pierre Bouillon and Carle Vernet before joining the École des Beaux-Arts, where he studied under Pierre-Narcisse Guérin. To avoid his son being conscripted into the army, in 1812 Géricault's father paid for a man to go into military service in his son's stead. This postponement of duty allowed the young artist time to create his painting Charging Chasseur (1812), which brought him both recognition and an award when presented at the Salon of 1812.

Though Géricault was serious in his studies, he often tried to escape the studio to draw horses (a great passion of his). He was eventually expelled from Guérin's studio after an innocent fight with other students, during which he threw a pail of water that accidentally fell on his teacher's head.

In 1814 Géricault joined the Third Brigade of the First Company of the Royal Musketeers and served for a year. The prestige and romance associated with this position must have appealed to the artist, who was generally recognized as stylish, handsome and self-aware. He was even known to use paper curlers to make his naturally straight hair more fashionably wavy, though he kept this a secret.

As with many young artists of this period, Géricault competed for the coveted Prix de Rome, which included a paid study period in Italy. Though he failed to win the prize, he decided to travel to Italy on his own. While there he discovered the art of Michelangelo and the Baroque, both of which would have a profound influence on his own work, both in his figural representations and his dramatic use of light and dark. The trip also offered him a means of avoiding the complications of an affair he was having with his uncle's young wife.

While in Italy Géricault made it his aim to study the great masters, adopting a strict and serious program for himself. He outlined his goals thus: "To draw and paint after the great Old Masters. - Read and compose - Anatomy. Antiques - Music - Italian. [...] Concern myself only with the style of the Old Masters and compose, without going out and always alone." Nonetheless, he was also fascinated with everyday life in Italy, and followed accounts of Italian bandits, outlaws and peasants, all of which inspired some of his best works of the period. Gericault slowly began to move away from the traditional classical themes that were popular in French artmaking at the time and to adopt a more modern approach to painting that involved creating dramatic, compositionally complex narratives with a heightened use of color and light. This marks the beginning of the movement known as Romanticism, of which Géricault was an important early member.

Gericault's Romanticism was in full swing when he returned to Paris in 1817, as can be seen in his large-scale landscape paintings depicting the times of the day, Morning, Noon, and Evening, all completed in 1818. These works were commissioned by his uncle - the same uncle whose wife Gericault was having an affair with. When she bore an illegitimate son in August 1818 his uncle refused the works and they stayed in the artist's studio until his death. The fact that Géricault fathered a child out of wedlock would be kept a family secret until it was discovered by scholars in 1976.

During his short career Géricault created groups of works focused on particular themes, including horses, scenes of military battle and soldiers, Latin American and Spanish revolutionary figures, and finally Orientalist subjects. These themes fit well within the Romantic approach to artmaking which so influenced Géricault's contemporaries. Indeed, many of the early proponents of the Romantic style, such as Eugène Delacroix, Ary Scheffer, Paul Huet, and Léon Cognet, studied, like Géricault, in the studio of Guérin. Despite the Neoclassical influence of their master, they pioneered a style which celebrated emotions and ideals such as freedom, heroism, loss, and wonder. The emphasis on human emotions and the search for exotic or contemporary subject matter were tantamount for the poets, writers, musicians, and artists associated with the movement that was later named Romanticism.

As with his fellow Romantics, Géricault was attracted to sublime and often horrific subjects. Some have caricatured Géricault as a brooding figure who was fascinated by the sight of violence, mental illness, and death, but it is more likely that these subjects provided fertile ground to push the boundaries of his artistic expression. In her book on Gericault, Nina Athanassoglou-Kallmyer described the artist as "unfettered by prejudices and rules, and bent on the contemporary, horrific beauty ... of Romantic modernism."

Gericault applied his interest in macabre subjects to a contemporary subject in his most famous work, The Raft of the Medusa (1818-1819). Providing one of the clearest and best examples of French Romanticism, the work dealt with the highly controversial shipwreck of the French ship the Méduse (Medusa). Géricault was so focused on creating this work that it is believed that he shaved his cherished hair, knowing his vanity would prevent him from wanting to abandon his studio to appear in public.

Following the polarized reception of The Raft of the Medusa at the 1819 Salon Géricault travelled to England, where he stayed for more than a year. He briefly returned to Paris in the middle of his sojourn stopping on the way in Brussels to visit the great Neoclassical painter, Jacques-Louis David, who was living there in exile. Gericault suffered ill health while in England, including bouts of sciatica (exacerbated by horse riding), pneumonia, and depression (the latter may have included a failed suicide attempt). However, despite these maladies, Gericault greatly enjoyed wandering the streets of London, as he describes in a letter to a friend: "for relaxation, [I] wander about the streets which are so full of constant movement and variety that you would never leave them, I am sure." He fully immersed himself in London life, socializing with English artists, attending boxing matches, riding horses, and even maintaining a light-hearted affair with an upper-class British lady about whom he wrote: "she calls me the god of painting and she adores me as such." He was, however, also moved by the plight of the English poor and created a series of lithographs on the subject, as well as other prints featuring English country life and sporting events. Indeed, Gericault experimented widely during his career with the relatively new medium of lithography, and became quite skilled as a printmaker. Monopolizing on the French interest in English life (there was a vogue for all things English in France at the time), upon returning from London in December 1821, Géricault continued to create works with English themes that found a ready audience in France. 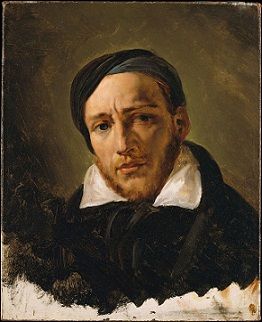 Despite having achieved great artistic success, the last years of Géricault's life were troubled. After returning from London, he invested in an industrial plan to create a factory which was to produce artificially manufactured stone. The plan failed and resulted in financial hardship with the loss of economic stability he had thus far relied upon. In addition, his health continued to degrade, he fell into a depression, and he began exhibiting destructive behavior. It is perhaps this darkening of his mood which inspired his last great works, the Monomaniacs: a series of haunting portrait paintings of the mentally ill. Of the ten originally painted works, five are accounted for today. They were discovered years after the artist's death in 1863 in the attic of a house in Germany by art critic Louis Viardot.

During the last days of his life, Géricault had to have a tumor on his lower spine removed which was the result of three horse riding accidents that occurred in the spring of 1822. Forever interested in the body as a source of artistic inspiration, he refused anesthesia so that he could see, with the aid of a mirror, the elements of his body as the surgeon performed the operation. Géricault soon died of his numerous illnesses. His friend and admirer Ary Schefffer recorded the scene in his painting The Death of Géricault (1824).

The Legacy of Théodore Géricault 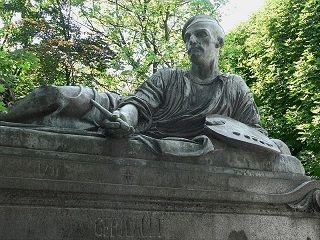 Géricault's impressive approach to artmaking helped to shape the Romantic art movement. His choice of modern subject matter, coupled with the use of complex poses and dramatic light effects inspired the work of future Romantic painters such as Eugène Delacroix and Ary Sheffer. Like them, Géricault mined the depths of the human psyche, using the physical body as the outward symbol of the (often degraded) soul. In popular perception Gericault has come to exemplify the notion of the "Romantic" artist in a broader sense. Known for his highly individualistic and courageous creative spirit, but also for the suffering and torment he endured, Gércault's somewhat sentimentalized legacy can be found in the tragic portrayal of such artists as Vincent van Gogh and Amadeo Modigliani.

The Raft of the Medusa has become one of the legendary paintings of the Modern period. Sandra Cinto, Max Ernst, Jeff Koons, Vik Muniz, Peter Saul, and Frank Stella are just some of the artists who have drawn direct inspiration from that epic painting.