Edgar Degas was the eldest of five children of Célestine Musson de Gas, an American by birth, and Auguste de Gas, a banker. Edgar later changed his surname to the less aristocratic sounding 'Degas' in 1870. Born into a wealthy Franco-Italian family, he was encouraged from an early age to pursue the arts, though not as a long-term career. Following his graduation in 1853 with a baccalaureate in literature, the eighteen-year-old Degas registered at the Louvre as a copyist, which he claimed later in life is the foundation for any true artist.

After a brief period at law school, he gave up on the his father's aspirations of Degas becoming a lawyer. In 1855 he was admitted to the École des Beaux-Arts in Paris, where he studied drawing under the academic artist Louis Lamothe, a former pupil of Jean-Auguste-Dominique Ingres. Degas is even later said to follow Ingres's maxim: "Draw lines, young man., draw lines." That same year, the Exposition Universelle took place, and Degas was enthralled by Gustave Courbet's Pavilion of Realism.

In 1856, when Degas was aged 22, he traveled to Naples, Italy, to visit his aunt, the Baroness Bellelli and her family. This three-year trip was an important moment in his development, and resulted in the Realist portrait The Bellelli Family (1859). He spent countless hours combing the museums and galleries of Italy, carefully studying Renaissance works by Michelangelo, Raphael and Titian, among others. In 1864, while copying a picture by Velázquez at the Louvre, he met Édouard Manet, who by chance was copying the same painting. His friendship with Manet was instrumental for Degas, and probably for Manet, and even the development of Impressionism as a whole. The outspoken, well-regarded Manet was a very different personality from the introspective, and often self-doubting Degas. But their friendship and close association lasted until the end of Manet's life and is discussed in detail in Sebastian Smee's book "The Art of Rivalry".

The following year, Degas exhibited at the Paris Salon, the first of six consecutive showings, showing works such as Édouard Manet and Mme. Manet and The Orchestra of the Opera (both 1868-69), paintings that subtly blurred the lines between straight portraiture and genre painting. While Degas was serving with the National Guard in the Franco-Prussian War (1870-71), he realized that his eyesight was defective during rifle training. Evidence of this genetic defect can be seen even in his most celebrated paintings.

Although the 1860s was a productive period in Degas's career, his most renowned body of work was created in the 1870s. By this time he had discovered his true muse - Paris. He (much as Manet and other Impressionists) drew inspiration from its boulevards, cafés, shops, dance studios, drawing rooms, theaters, and operas. And he became well known for his close observation, devoting much time to capturing the detail of surrounding human beings. Perhaps for this reason he rejected the label 'Impressionist', believing it implied something accidental and incomplete. Evidence of this can be found in seminal works such as Foyer de la Danse (1872), Musicians in the Orchestra (1872) and A Carriage at the Races (1873). Each of these pictures also exemplify how Degas assumed unconventional points-of-view, suggesting the perspective of a distracted spectator. Yet unlike contemporaries like Renoir and Monet, Degas was not a plein air painter, preferring instead the light and reliability of the studio. Incidentally, his few outdoor scenes were produced from memory, or conjured in part from his imagination.

From 1872 to 1873, Degas made an extended trip to New Orleans to visit his brother René and other family members, including his uncle, who operated a failing cotton exchange. During this trip, he produced a number of important paintings, including A Cotton Office in New Orleans (1873), the only one of his works to be purchased by a museum in his lifetime. Following his return home, the French Impressionists held their first group show at the Café Guerbois, in which Degas was included. Despite this association, Degas always held the other members at arm's length. He admired their work and shared many of their ideals, but he never entirely adhered to their philosophy. Nevertheless, he showed work in all but one Impressionist group show, including the final 1886 exhibition. As well, he single-handedly recruited more artists to exhibit at these shows than any other member.

Degas remained a bachelor throughout his life, and had few, if any, romantic entanglements. This has fueled speculation about the rationale for his unusual and generally unflattering images of women. His intent may have been to suggest the figures caught off-guard, though feminist critics have pointed out that the effect is often degrading. Any male painter, who spends so much time (famously) depicting the female form is bound to receive his share of criticism - and the same hold true for a female that abstracts the nude male. 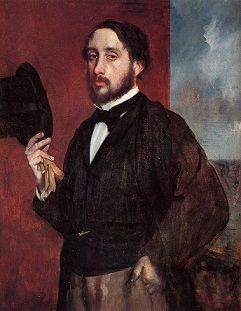 In fact, there is much to consider regarding his treatment of the female subject in his work, much of this (and the below) is wonderfully discussed in an essay on Degas by the writer and art critic Julian Barnes. For example, the detractors include the poet Tom Paulin who in 1996 said "in this exhibition are women in contorted poses ... They're like performing animals, they're like animals in the zoo." Further, the curator and historian Tobia Bezzola wrote: "It is not known whether Degas had sexual relationships with women; at any rate there is no evidence that he did .. [His] series of monotypes depicting brothel scenes is the most extreme example of the mixture of voyeurism and abhorrence with which he reacted to female sexuality." But it is also worth remembering the usual practices of painters of his generation who tended to work from a female model, drew her in a semi-voluptious (or even pornographic) manner, and concluded (or maybe started with) a tryst of one type of another. In Degas's case, one sitter reported that "He's a strange gentleman - he spends the whole four hours of the sitting combing my hair". That particular sitter was complaining. Upon significant study of the hundreds of depictions women dancing, washing, brushing their hair by Degas, an observer may well realize the painter in a more gentle light. As the 19th century came to a close, Degas's pace of work waned, and he began spending more time collecting the works of other artists he admired. He purchased work by contemporaries such as Manet, Pissarro, van Gogh, Gauguin and Cézanne, as well as older artists who had informed Degas as a young man, like Delacroix and Ingres. Late works, like the bronze Woman Rubbing Her Back with a Sponge (1900), is a testament to Degas's continued devotion to capturing the female form.

Although Degas abandoned oil painting later in life, he continued to work in a variety of media, including pastels and photography, yet sculpture became his preferred medium as his eyesight deteriorated. He increasingly became a recluse, and most of his friendships with artists like Monet and Renoir, eventually dissolved. These ruptures were hastened by Degas's outspoken anti-Semitism, which was amplified by his stance during the infamous Dreyfus Affair. He died in 1917.

The Legacy of Edgar Degas

Although Degas suffered criticism during his lifetime, by the time of his death his reputation was secure as one of the leaders of late-19th-century French art. His distinct difference from the Impressionists, his greater tendency toward Realism, had also come to be appreciated. His standing has only increased since his death, though since the 1970s he was been the focus of a lot of scholarly attention and criticism, primarily focused around his images of women, which have been seen as misogynistic. Some have even compared his treatment of the other sex linked to his antisemitism and overall lack of moral compass.