In December 1617, Bartolomé Esteban Murillo was born in Seville, where he would live and work his entire life. Throughout his childhood, Seville remained the foremost city in Spain, equal in power and population to Venice, Amsterdam, or even Madrid. Seville had long held the monopoly on trade with the New World, and despite Spain's near constant wars with France and the Low Countries, the city remained prosperous well into the 1630s. Later, when Murillo established his career, Seville's population and standard of living decreased, while its churches and religious fraternities increased. Eventually, his identity became integrated so strongly with religion that his pictures arguably shaped Baroque Seville as much as the city moulded his career.

Murillo's exact birthdate is unknown, but his parents were prosperous, middle-class, and by 1617, very old. Gaspar Esteban, a barber-surgeon, had been married to María Murillo for thirty years and Bartolomé was the last of their fourteen children. Effectively an only child, young Bartolomé lived a comfortable and happy life until around his ninth birthday, when his father and mother died within months of one another. His older sister Ana, and her husband, took him in and nothing indicates that he was unhappy with them, but his once carefree childhood was over. Murillo soon applied his nascent but evident talents towards becoming a painter and, at first, he aspired to the Americas, where some of his relatives had already emigrated. When he turned fifteen, he drew up a will in preparation for the voyage and painted several canvases to introduce himself to the colonial market but, in the end, he never saw the New World. In fact, for his entire career, there is no proof he ever left Spain.

According to Antonio Palomino, in the first biography of the artist published in 1724, Murillo trained with Juan del Castillo, an accomplished if not particularly innovative artist, who was related to his mother. No contract survives, but Castillo probably taught Murillo between 1630 and 1636. Murillo painted his earliest known canvases for the monastery of La Regina Angelorum. These pictures, The Vision of Fray Lauterio (c. 1638) and Saint Dominic Receiving the Rosary from the Virgin Mary (c. 1639) feature the same warm palette and strongly delineated figures found in Castillo's work. But apart from these examples, very little of Murillo's early work survives, possibly, because, according to Palomino, he started out as a 'festival painter', designing decorations for ferias and religious festivals, and these works were by definition ephemeral.

While we have only Palomino's word for Murillo's earliest career, 1645 was indisputably one of his pivotal years. He married Beatríz Cabrera in the Church of Santa Maria Magdalena (where he had been baptised), and she was soon pregnant with the first of nine children. Moreover, he won his first major commission to paint thirteen canvases for the Little Cloister of the Convento de San Francisco in Seville. About eleven of the paintings survive, dispersed throughout European and American collections, and each depicts a miracle, ecstasy, or charitable act of a Franciscan friar or saint. Murillo's sophisticated palette, split compositions and fluid brushwork illustrated such a radical departure from his early work, some scholars contend he must have been inspired by Italian and Flemish masterpieces in Madrid. Be that as it may, the series was so successful, it precipitated a steady stream of commissions during the 1650s: including Murillo's first Adoration of the Shepherds (c. 1650), a subject he would paint at least eight more times; The Virgin of the Rosary (c. 1650), painted at least twenty times; and his first interpretations of the Immaculate Conception (1652), which would become his most celebrated subject.

By the early 1650s, Seville, though still seen as Spain's cosmopolitan and intellectual centre, was no longer its commercial powerhouse. The city had lost its trade monopoly to Cadíz, and a plague had wiped out nearly half its population, a catastrophe followed by famine, recession and trade rebellion. Partly in reaction to this disintegration, Seville's religious orders - Franciscans, Dominicans and Capuchins - dedicated their considerable resources towards charity, and commissioning artworks that celebrated their charity. Murillo, who was deeply devout (even by the standards of Tridentine Spain), shaped his life and career on service to the Catholic Church and its fraternities, many of which are still active today. 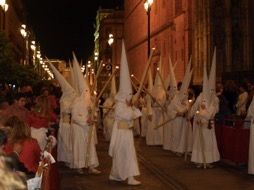 Unlike the previous generation of master painters, including Diego Velázquez, Francisco de Zurbarán and Alonso Cano, Murillo did not aspire to royal patronage. His connections to Seville's aristocracy and religious brotherhoods facilitated a flow of commissions throughout the 1650s and 1660s, and his career grew apace with his family and property investments. Eventually in the spring of 1658, he travelled to Madrid, where Velázquez was now the most powerful and admired painter to the Court of Philip IV. Fellow Sevillanos Zurbarán and Cano had also found success there, and these artists possibly arranged access to royal collections, where Murillo could study masterpieces by Titian, Rubens and Van Dyck.

In January of 1660, Murillo oversaw the inauguration of Seville's new Real Academía de Bellas Artes, becoming its first co-president with Francisco de Herrera the Younger. The school was Spain's first official academy and taught life drawing, as well as painting, sculpture and gilding. As innovative as he was prolific, even at this relatively late phase of his career, Murillo developed a new genre. He began to render Christ, John the Baptist, the Virgin, and certain saints as beautiful Sevillian children and adolescents, introducing a sweetness and accessibility into religious subjects that was particularly appropriate for side chapels, private devotional spaces, and even domestic interiors.

Don Justino de Neve, canon of Seville Cathedral was actually Murillo's closest friend and was instrumental in helping him secure commissions for the new church of Santa María la Blanca (c. 1665), and a superb Immaculate Conception for the Hospital of the Venerables Sacredotes.

In the 1670s, Murillo also completed paintings of various subjects for the Convento de los Padres Capuchinos (c. 1670); eight canvases illustrating the parable of the Prodigal Son (before 1670); and several works dedicated to Saint Thomas de Villanueva for the church of San Agustín (c.1670). Additionally, by 1667, he had begun his important series for the Hospital de la Caridad: six of the seven acts of mercy and two paintings respectively of Saint Elizabeth of Hungary and Saint John of God. In 1682, Murillo began his last commission, a group of canvases for the main altar of the church of the Capuchins in Cadíz. He blocked out each composition, sketching directly onto prepared canvases, which were then installed above the main altar, where he would paint them in situ working from scaffolding. While working on the central, most important canvas, a multi-figured composition illustrating the Mystic Marriage of Saint Catherine, Murillo fell at least twenty feet to the church's marble floor. The impact ruptured his abdominal wall, and although he managed to return to Seville, certainly aided by assistants, he died a few months later of hernia and associated complications. The altarpiece was later completed by his pupil Francisco Meneses Osorio. Although talented, Osorio emulated Murillo's style and technique so faithfully that his paintings can be difficult to distinguish from those of his teacher. 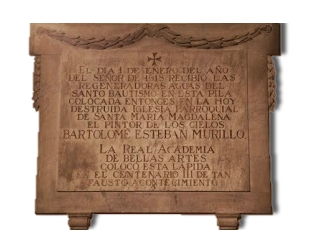 Only Murillo's youngest son Gaspar was with him when he died. He had lived as a widower since María's death in 1665 and, despite the deaths of five children, their life together was said to be a happy one. By 1682, two of his surviving sons had left Seville, one for the Americas, and his only remaining daughter had entered a convent. Surprisingly, for a painter who excelled at images of children, none survives of his own, nor any of María; only two self-portraits are known. Important paintings by Murillo hang in Seville's Cathedral, churches and the Museo de Bellas Artes, and yet, unlike El Greco in Toledo it is not always easy to find Murillo in Seville. He was interred in the church of Santa Cruz, but when the church was later demolished, his remains were lost. Today, there is only one traditional memorial: a nineteenth-century stone plaque noting Murillo's baptism, and his fame as Seville's "Painter of Heaven". This plaque hangs in the Baroque church of Santa María Magdalena, which was built in 1692 to replace the modest church where Murillo was baptised and married.

The Legacy of Bartolomé Esteban Murillo Until the late 19th century, Murillo was arguably the most famous artist of all his countrymen outside of Spain. His studio in Seville nurtured succeeding generations of painters, and the most successful - Francisco Meneses Osorio, Juan Simón Guitérrez, Sebastián Gómez, Pedro Núñez de Villavicencio, and Esteban Márquez - promulgated his style, sensibilities and iconography so devotedly that Murillo continued to embody the Seville School long after his death. This was particularly true of religious art. Murillo was inarguably the great Catholic painter of the Spanish Golden Age. Not only was he prolific and ambitious, he had a genius for balancing the doctrinal with the sensual. A deeply devout man himself, he illustrated religious subjects with empathy and immediacy, engaging viewers like no other artist before him. His angels and Virgins are graceful and true, while his urchins have an almost tangible energy, but whether his subject was sacred or profane, he always painted to draw hand and eye, making his figures appear both ideal and accessible. Murillo's treatment of traditional subjects and his inventive formulas for new ones freed sacred imagery from the mystical, monumental remove typical of Zurbarán and Juan Martínez Montañés, setting it eye-level with the faithful, and encouraging communion with the subject. Moreover, Murillo often painted recognisable Sevillanos, everyday people who practiced their faith as if their lives depended upon it, because it did.

During the 19th century, however, Murillo's work fell precipitously out of favor and almost in parallel with Spain's fortunes. After a brief period of prosperity and enlightenment, decades of war, invasion, colonial losses, and last but not least, quarrels within the Church shattered the market for Catholic iconography. Collectors moved instead towards secular subjects, and genres more in keeping with the rise of a wealthy middle class, such as portraiture and still lifes. Murillo, having been known in Spain as a religious painter, and abroad as a genre painter, was ill-served on both sides, because the Church no longer financed vast commissions, and following the Industrial Revolution, many viewed Murillo's urchins and mendicants as patronising or worse, sentimental kitsch. As curator Xavier Salomon noted, "[Murillo] was incredibly famous up until the 19th century, but with shifting fashions for art - and because of the many of the subject matters he treated - he has [become] less popular, undeservedly".

In the later 19th century, Murillo's genre paintings enjoyed a brief renaissance as the inspiration behind the Costumbrismos, painters of street life, who paid meticulous attention to narrative, costume, gesture and attitudes. And certain masterpieces, including The Young Beggar, continued to appeal to Realists and proto-Impressionists. But it was only relatively recently that Murillo work has been reassessed by scholars and curators. 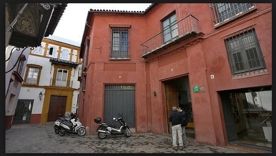 Currently, 2018 is the quadricentennial of Murillo's "birthday", and in celebration Seville has launched a programme of events and exhibitions, including a show at the Museo de Bellas Artes reuniting paintings from around the world, while "Murillo and his Trail in Seville", at the Espacio Santa Clara, looks at his far-reaching influence on the Seville School and beyond. Soon, visitors to Seville will be able to experience some of Murillo's life and spirit at the Casa de Murillo, the artist's last home. Formerly a museum dedicated to Murillo, it closed in 1988 and is now the Office of the Andalusian Institute of Flamenco. However, Seville is currently planning a Research and Study Centre of the School of Murillo and Seville's Golden Age.