Berthe Morisot was born to Edmé Tiburce Morisot and Marie-Joséphine-Cornélie Thomas in Bourges, France, in 1841. The family was well-off and her father worked as a senior administrator for the local government. Her mother was related to the Rococo painter Jean-Honore Fragonard. Morisot had two older sisters, Yves and Edma, and also a younger brother Tiburce. In 1852, the family moved to Paris, where Morisot would live for the rest of her life.

As the daughters of a bourgeois family, it was expected that Berthe and her sisters would receive an artistic education. The painter Joseph Guichard, one of their private tutors, took them to the Louvre, where he taught them to learn by copying the paintings on the walls. Guichard notably warned the girls' parents that continuing their artistic education could be problematic: "Given your daughters' natural gifts, it will not be petty drawing-room talents that my instruction will achieve; they will become painters. Are you fully aware of what that means? It will be revolutionary - I would almost say catastrophic - in your haute bourgeoisie milieu."

However, Edma and Berthe continued to be taught even after this warning. After a while, however, Edma married a naval officer and moved away to have children, meaning she gave up her serious artistic pursuits. But, she did continue to encourage Berthe (with whom she was very close) to continue working.

Morisot responded by registering as a copyist at the Louvre. When she was there, she got to know other artists including the landscape painter Jean-Baptiste-Camille Corot. He encouraged her to start working en plein air, where she began to produce her first serious paintings. She studied painting extensively during this period, and was also taught sculpture, although none of her sculptural works survived.

In 1864, when Morisot was only 23, the official Parisian Salon accepted two of her landscape paintings. As a young woman, this was an almost-unheard-of achievement. One critic responded by saying, "You see, ladies, one may be an artist and take part in public exhibitions of painting and remain, as before, a very respectable and very charming person." She continued to show at the Salon for several years, where her work was generally well-received.

In 1868, Morisot met the effective leader of avant-garde painting in Paris, Édouard Manet. Manet famously wrote in a letter to Henri Fantin-Latour, "the [two sisters] Morisot are delightful. What a shame they aren't men; nonetheless they might, as women, serve the cause of painting by each marrying an academicien" (men who were jurors of the French Academy). Manet and Morisot immediately became quite close, and began to provide feedback on each other's work. Professionally however, Morisot was upset when Manet made his own additions to one of her Salon submissions more nonchalantly than Morisot desired, suggesting that Manet didn't see the relationship as wholly reciprocal. 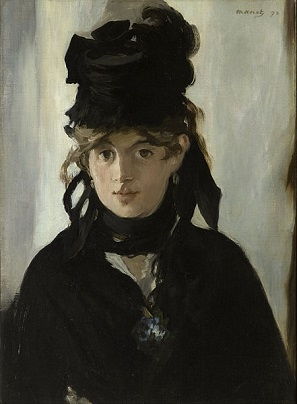 Nonetheless, Manet evidently respected Morisot's opinion and work as an artist. Notably, Morisot prompted Manet to take up en plein air painting, which was a significant move in his artistic practice. Manet painted Morisot 12 times, making her his most frequent subject. He completed a particularly famous portrait of Morisot in 1872, where he depicted her wearing a black dress, with a confident, intelligent gaze. According to critic Sue Roe, Manet's 1868 work The Balcony depicts Morisot and "focused on her air of compelling beauty, her mystery and the complex inner struggle reflected in her face."

It has been suggested that the pair were romantically involved, but couldn't pursue a relationship as Manet was already married by the time they met. It stands to remember that Manet was quite the playboy of his time, regularly attending brothels and reportedly keeping company with many women outside of his marriage. Whether the two had a passionate affair, or Morisot was the exception to Manet's supposed habits, is unknown. Through the letters left by Morisot we do know she cared deeply for the charismatic Manet.

In 1872, Morisot sold 22 paintings to the private dealer Durand-Ruel, marking the start of her career as an established artist. Through her connection with Manet, Morisot was drawn into his circle of painters who were later known as the Impressionists. Manet himself refused to leave his more traditional art career and encouraged Morisot not to join the avant-garde group. However, Morisot didn't take his advice and her work was included in the first ever exhibition of Impressionist painting in 1874, pointing to her importance within the growing movement.

Morisot's skill at gauging public taste is suggested by the fact that her work remained popular throughout her lifetime and she often outsold many of her contemporaries, including Edgar Degas (who was a frequent visitor at her family home, and is thought to compete with Manet for her attention), Claude Monet, and Alfred Sisley. However, she was unrelentingly critical of herself and her own work. In a letter to Claude Monet, for example, she accused herself of "becoming a bronchial old lady...engaged in a war with my canvases. Do not depend on me to cover much wall space. I am not doing anything worthwhile despite my desire to do it."

In 1874, and at the relatively late age of 33, Morisot married Manet's younger brother Eugène. Some have suggested that theirs was a marriage of convenience, a second-best option when Morisot couldn't marry the older, already-married artist. Eugène was also an artist, but he agreed to give up his own career in order to help Morisot in hers. Upon their marriage, Edgar Degas gifted the couple a portrait of Eugène. Manet never again painted Morisot after the marriage.

Unlike her sister, Morisot continued to paint while also carving out a life as a wife and a mother. In 1878, she and Eugène welcomed their first and only child, Julie. Morisot frequently painted her daughter, and as a child Julie also posed for several other painters such as Manet and Renoir. 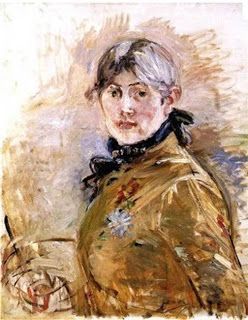 Throughout her career, Morisot had close friendships with many members of the Impressionist circle, including Degas, Monet, Renoir, and the poet Mallarme. She continued to be actively involved in the Impressionist group, exhibiting with them every year except 1878. She even organized the final Impressionist exhibition in 1886 entirely single-handedly. After the demise of the Impressionist group as an organized movement she continued to exhibit with avant-garde artists, contributing several works to the Belgian group Les XX's show in Brussels in 1887 and four paintings in 1894 to that of its successor, La Libre Esthetique. Unusually, Morisot always exhibited under her maiden name instead of using a pseudonym or her married name.

Eugène Manet suffered from a period of poor health beginning in 1891 and finally died in Paris the following year. Three years later, their daughter Julie contracted pneumonia. Morisot nursed her back to health, but sadly picked up the illness herself and eventually died on March 2, 1895. After her death the poet Paul Valery wrote that "Berthe Morisot's uniqueness was to 'live' her painting, and to paint her life [...] she took up, put down, returned to her brush like a thought that comes to us, is clean forgotten, then occurs to us once again."

The year after her death, Morisot's artist friends, including Degas, Renoir, Monet and Mallarme, organized the first retrospective of Morisot's work, drawing together 380 of her paintings and paying tribute to her talent.

The Legacy of Berthe Morisot 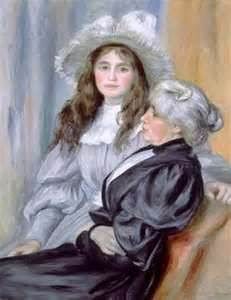 Throughout her career, Berthe Morisot had to fight against preconceptions of women and their role. She was highly unusual in her decision to be an artist as well as a wife and mother, but many people inevitably saw her primarily in her traditionally female roles. Therefore, until recently it has been assumed that Manet was the "master" and Morisot the "student" in their relationship, but it is certainly arguable that they influenced each other in different ways.

Although she has been forgotten in some corners, Morisot was an important figure in the founding of Impressionism as a movement; she participated in their first exhibition and was a key artistic and social figure within their circle. Morisot was also a strong encouraging influence on other female Impressionist painters living in Paris at the time, such as Mary Cassatt and Eva Gonzalès.