Joseph Mallord William Turner's actual birthdate is unconfirmed, but he was baptized on May 14, 1775. His father, William Turner was a barber and wig maker and his mother, Mary Marshall, came from a family of butchers. His younger sister, Mary Ann, was born in September 1778, but died when she was 5 years old.

At the age of ten, due to his mother's signs of mental instability, Turner was sent to live with an uncle in Brentford, Middlesex, a small town on the banks of the Thames, to the west of London. In Brentford, Turner began his artistic activities by coloring a series of engraved plates. Later, in 1786, he was sent to Margate where he attended school and also began to draw the town and surrounding area. Back in London, his father exhibited these drawings in his shop and sold them for a few shillings each. Sketching the town and countryside and later creating finished paintings from location sketches would become his working style throughout his career. Although he lived in different areas around London and later traveled widely, he remained a Londoner throughout his life and never lost his Cockney accent. Unlike many of his contemporaries, Turner did not adopt an elitist air as he climbed the professional ladder. In contrast, John Constable famously jockeyed for position in terms of social status and by literally contriving to displace a Turner painting in one exhibition at the Royal Academy with one of his own. Though Turner spent time in the society of noble patrons, he preferred to frequent his humbler residences in Chelsea and the fishing village of Margate, even later in life, while also sojourning ceaselessly in the country and seaside in pursuit of striking subjects out in the natural world.

Early in Turner's career, he created architectural studies for several architects and later worked with a topographical draughtsman. As a result, many of his early drawings and watercolors included architectural subjects. At the age of 14, he entered the prestigious Royal Academy of Art, and was accepted as an Academy member a year later. Founded by an act of King George III in 1768, the Academy was an important broker of taste as well as a crucial node in the network of possible sales and commissioning - especially from the Royal Family and nobility - for its artist members. Although he was interested in architecture, he was advised by the architect Thomas Hardwick to continue painting. During this period, Turner produced watercolors that were exhibited every year at the Academy. His routine was to paint in the winter and travel in the summer throughout England and Wales. In 1796, he exhibited his first oil painting, Fishermen at Sea at the Royal Academy. It was a nocturnal moonlit scene, the type of nighttime painting that was popular at the time. He was praised for this piece, and it established him as both an oil painter and a portrayer of maritime scenes. 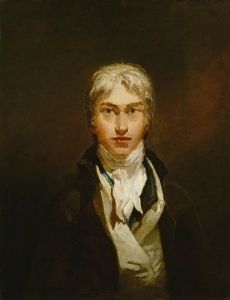 In 1799, at the age of 24, Turner was elected an associate of the Royal Academy. At this time, he painted a flattering self-portrait, indicating his belief that he had "arrived." In 1802 he became a full academician. Further recognition came in 1807, at the age of 32, when he was appointed professor of perspective. By 1800, he was already financially prosperous and moved to a better address in London, Harley Street, where he shared a flat with J.T. Serres, an older marine painter. In 1804, he opened a gallery on Harley and Queen Anne Street to exhibit his work.

He expanded his travels to the European continent in 1802, visiting France and Switzerland. A group of noblemen sponsored this trip, and he was provided with a French-speaking guide and a small coach. He documented the trip with his painting, Calais Pier (1802-3) and made more than 400 drawings during this journey. In his early paintings Turner attempted to master other styles he admired, such as the realistic, orderly pictorial techniques of Willem van der Velde and Claude Lorrain, but by 1805 his oil sketches and paintings such as The Shipwreck demonstrated his own original approach to landscapes and seascapes. By his late 30s, his work became increasingly atmospheric and luminous. In paintings such as Snowstorm: Hannibal and his Army Crossing the Alps (1812), he started to focus his efforts on portraying the power of nature and man's insignificance in the face of it, while creating a historical rendering. In addition to painting, Turner was interested in poetry, especially Walter Scott, Lord Byron, Thomas Moore and John Milton, and he wrote his own poetry as well, including an unfinished and unpublished work, Fallacies of Hope, in 1812. Much later, when Turner exhibited Slave Ship (Slavers Throwing Overboard the Dead and Dying, Typhoon Coming On) (1840) at the Royal Academy, he included excerpts of his poetry alongside the painting.

With the end of the Napoleonic Wars in 1815, Turner was able to travel abroad again. In the summer of 1819, he made his first trip to Italy, visiting Rome, Naples, Florence, and Venice. During this time, he made about 1,500 drawings from which he developed several paintings. These paintings, such as The Grand Canal, Venice (1835) show a change in how he used color - with many transparent layers, warm and cool colors creating form, and, more generally, a bolder range.

Turner was very private about his personal life, and he became more eccentric as he grew older. He had few close friends, but was very close with his father who lived with him for 30 years and worked as his studio assistant, cook and gardener. His mother had died in 1804, probably in the mental hospital in Bethlem. After his father died in 1829, Turner suffered bouts of depression. Although he never married, he had two daughters, Eveline and Georgianna, with an older widow, Sarah Danby. Turner wrote in one of his sketchbooks that "Woman is doubtful love" and there is some evidence that the actual mother of his daughters was Sarah Danby's niece who was his housekeeper for a period of time. Later, he had a relationship with Sophia Caroline Booth, living as 'Mr. Booth' in her house in Chelsea.

Turner continued to travel in his later years, visiting Italy, Switzerland, Germany, France, Denmark and Czechoslovakia. He sketched tirelessly, and his bequest included approximately 19,000 sketches from these travels. His paintings became more fluid and atmospheric with minimal details. Some examples during this period include The Fighting Temeraire tugged to her last berth to be broken up (1839) and Rain, Steam, and Speed - the Great Western Railway (1844). These paintings expressed Turner's response to the changes being introduced by the Industrial Revolution. Turner's innovative style in these later paintings was criticized publicly, and John Ruskin, an English art critic and long-time supporter of Turner's work, defended him by publishing Modern Painters (1843-60). Turner exhibited at the Royal Academy for the last time in 1850. 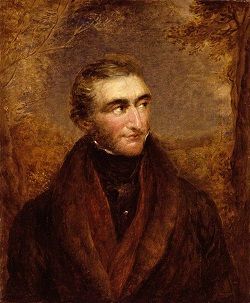 Turner died in Cheyne Walk in Chelsea on December 19, 1851, and he is buried in St. Paul's Cathedral. He left most of his fortune to found a charity for "decayed artists," and he bequeathed his finished paintings to the National Gallery. As a result of litigation by relatives much of the fortune was inherited by them and both the finished and unfinished paintings became national property as a group under the name The Turner Bequest. Most of Turner's paintings are now housed in the Tate Britain with several important works held by the National Gallery. In 1984, the Tate Britain created the prestigious Turner Prize art award, and in 2005, Turner's The Fighting Temeraire was voted Britain's "greatest painting" in a BBC public poll.

Among painters, Turner's impact has been felt for more than two centuries now: his representation of the confrontation humans experienced upon encountering the effects of their own machine inventions in the modern era was an early attempt to engage with the world-changing Industrial Revolution. Even more influential was his mode of representation: impressionistic renderings of the effects of nature that expressed inner psychological states to the point of extreme, extraordinarily early abstraction - to a degree that would only be engaged with again as fully by painters more than a century later.

Turner's work, especially his late work, was deeply admired by the abstract painter Mark Rothko. One can see the influence in Rothko's large canvases of subtly shifting layers of color. In 1966 when Rothko saw an exhibition of Turners in a show sub-titled Imagination and Reality at the Museum of Modern Art in New York, he was quoted as saying, "This guy Turner, he learnt a lot from me." The radical nature of Turner's engagement with issues that were not only ahead of its time but still relevant in the contemporary moment was shown by this rare embrace of the work of a pre-modern master by a museum dedicated to modern art. In 2009, the Tate Britain displayed a selection of Turners in a room opposite another dedicated to six Rothko paintings, allowing visitors to compare the "striking affinity" between the two artists' work.

Furthermore, Turner's investigations of color and light inspired the contemporary Danish-Icelandic artist Olafur Eliasson to create a series of color experiments, each inspired by a different Turner painting. Eliasson states, "I have carefully dissected the amount of color tones, darkness and brightness in a group of Turner paintings, and then made a kind of 'color chart portrait' of each one, using the exact same colors and amount of light and darkness."