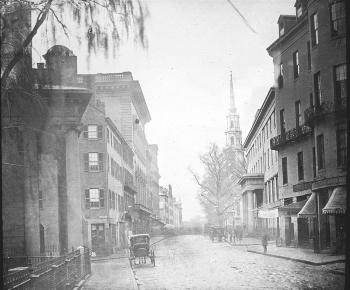 As a child, Sullivan enjoyed leisure and disliked work. He was unhappy at primary school, but enjoyed wandering the streets of Boston, later dating his decision to become an architect to this period in his life. On one outing, Sullivan saw a well-dressed man, clad in top hat and coat, exit a building. Determining that the man was important, Sullivan asked a workman about him and was told that he was the architect of the structure being built. Sullivan, prior to this, had looked at buildings with little awareness of their design and was astonished by the idea that a man, in his word, "could make up a building out of his head." He told his father of his plans and his father suggested, instead, that he become a farmer. Sullivan, despite clinging to the idea of being an architect, enjoyed spending summers at his grandparents' farm and was disappointed when his father forced him, from 1863, to work with him at his summer dancing school, hoping to instill strength and discipline in his son.

When Sullivan was a teenager, his mother's health began to decline, leading his parents to move to Chicago for medical care in 1869, leaving their younger son with his grandparents to attend high school in Boston. In 1871, Sullivan's grandmother died and his grandfather left for Philadelphia, leaving the teenager to live with neighbors in Boston for the next two years. While this arrangement was intended to allow Sullivan to finish high school, the son of the family with whom he lived was studying engineering at the Massachusetts Institute of Technology. He encouraged Sullivan to leave high school and enroll to study architecture at MIT.

Sullivan enrolled at MIT in September of 1872, at age sixteen. He was among the youngest and most inexperienced students at the architecture school, but persisted, learning the fundamentals of drawing and design from teachers William Ware and Eugène Letang. Sullivan, however, quickly grew dissatisfied with the program and decided to leave MIT after his first year of study.

Still intent on becoming an architect, Sullivan decided to gain practical experience with the intention of later enrolling at the famous École des Beaux Arts in Paris. In order to gain experience, he moved to Philadelphia to live with his grandfather and introduced himself to Frank Furness, whose buildings he admired. Sullivan persuaded Furness to give him a trial which led to a few months' work with Furness, ending in November of 1873.

After this, Sullivan moved to Chicago to stay with his parents. He was immediately fascinated by the city, which was rapidly developing after the Great Chicago Fire of 1871. He began a six-month term of employment with the architect Major William LeBaron Jenney and met John Edelmann, a fellow architect who would become a lifelong friend. In 1874, feeling that he had gained enough practical experience, Sullivan left for France, where he spent his first six weeks studying for the entrance exams to the École des Beaux Arts, which he passed, allowing him to immediately enroll. In Europe, Sullivan gave up his North American style, exchanging his flannel suit and canvas shoes for a top hat, tails, glove and cane. He enjoyed Paris, but once again grew frustrated with life in an educational institution, preferring to learn through practice.

Sullivan left Paris in 1875, returning to Chicago, where he worked as a freelance draftsman and designer. John Edelmann introduced him to Dankmar Adler, a prominent architect known for his skill in managing client relationships and engineering acoustics. Adler hired Sullivan in 1879. The pair immediately worked well together and, in 1880, Adler asked Sullivan, who was only twenty-four, to be his partner.

Adler & Sullivan quickly developed a reputation as a top architecture firm in Chicago. In the first few years of their partnership, the firm were responsible for numerous office buildings, theatres and private residences. It was as a designer of office buildings, particularly, that Sullivan began to make a name for himself, becoming known for his ornate exterior designs and wide windows.

It was, however, Chicago's Auditorium, in 1889, which proved the pair's first major achievement. This project, however, was strenuous and Sullivan fell into ill health. In need of revivification, Sullivan took a trip around the United States, travelling to California, Louisiana and Mississippi. His last destination, Ocean Springs, in Mississippi, proved so much to his liking that he bought land there, designing and building himself a vacation home.

Upon return, Sullivan threw himself into his work with renewed vigor. The firm designed around forty buildings between 1890 and 1895. Sullivan's projects included the Wainwright Building, built in St Louis, Missouri - this 1891 structure, which developed Sullivan's ideas about office buildings and ornament, is widely considered as the first tall building to celebrate verticality in its design. The Wainwright Building cemented Sullivan's position as one of the foremost architects in the United States and later earned him the moniker of "Father of Skyscrapers." Adler & Sullivan continued their success with the Transportation Building for the 1893 World's Columbian Exposition in Chicago. Sullivan's building, which attracted attention through its golden doors beneath an imposing Romanesque arch, won three medals, more than any other architect who had been commissioned for the Exposition, and secured his position as a great ornamentalist. The Transportation Building was popular with critics in both the United States and Europe, but the public preferred the classically designed pavilions that surrounded it, which influenced the subsequent Renaissance Revival in North America. Sullivan, who saw these buildings as erasing architectural progress in America, credited the fair with changing taste such that his own career began to dwindle, closing his memoir, published in 1924, with an indictment of its architecture. As the firm's success continued, Adler & Sullivan took on a number of young associates who would play a significant role in continuing Sullivan's work and developing American architecture, including Frank Lloyd Wright in 1887 and George Elmslie in 1888. Wright learnt a great deal from his period working under Sullivan and personally admired him, later stating that "the deep quiet of his temper had great charm." William L. Steele, though, another associate who worked under Sullivan, complained that he was a difficult person to work under, due largely to his severe and uncompromisingly high standards; he permitted no sloppiness and demanded a great deal of time from draughtsman. Frank Lloyd Wright, despite his admiration, found it difficult to work with him and left the studio in 1893, though the pair resumed their friendship later in life. Elmslie, who continued to work with Sullivan until 1908, played a significant role in developing the ornamentation for which his buildings are known.

The last decades of Sullivan's career were markedly less successful. The Panic of 1893 resulted in a sharp decline in building commissions across the United States. In 1895, Dankmar Adler announced that he was retiring, further disrupting the firm. Sullivan was distressed at Adler's departure, refusing to let him rejoin the firm when he desired to do so one year later. Adler instead worked with his sons for the rest of his life and their friendship was never renewed. Sullivan's first job after the dissolution of the firm was for the Bayard Building, in New York City, in 1897; after this, he worked on banks across the Midwest. With less work than with Adler, Sullivan published weekly articles on architecture, entitled Kindergarten Chats, during 1901 and 1902. Sullivan's difficult personality became increasingly pronounced, with the architect developing a reputation for refusing to consider clients' wishes. As his commissions continued to dwindle, Sullivan began to auction off his books and household items in order to pay the rent on his office.

Sullivan's work occupied the bulk of his life and little is known about his personal life, particularly in later years, which were not covered in his memoir. He married Margaret Hattabough in 1899. Their marriage was reportedly respectful and Sullivan admired his wife, but the pair, according to Hugh Morrison, "lived in different spheres." The pair had no children and divorced in 1917.

Sullivan devoted his last years to writing a memoir, entitled The Autobiography of an Idea, which was published in 1924 alongside nineteen plates illustrating his ideas on ornament gathered under the title 'System of Architectural Ornament.' These two works were successful, but Sullivan, now sixty-seven, fell ill soon after their publication. He died of neuritis and a weak heart in April of 1924. He was buried in Graceland Cemetery, where he had designed three mausoleums for wealthy clients earlier in his career; as Sullivan's estate was depleted by his death, a fundraising campaign was run in order to facilitate his burial.

The Legacy of Louis Sullivan Louis Sullivan's central tenet, "form follows function," went on to guide the development of modern architecture and design in the United States. Sullivan's influence is most obvious in his pioneering and perfecting of the skyscraper as a form but can also be felt in the development of ornament. He was a central figure in both the Chicago School of Architecture and the Prairie School and his aesthetic influence can be seen in the designs of those who worked under him at Adler & Sullivan, prominently including Frank Lloyd Wright, Marion Mahony Griffin, and Thomas Tallmadge.

Sullivan remains, however, unique in a number of ways. The popularity of Renaissance Revival architecture meant that he spawned fewer copycats that might otherwise have been the case. His skill in ornamentation, too, was such that few after him could match it, save those who were, at Adler & Sullivan, charged with executed it, such as George Elmslie.