William Hogarth was born on November 10th, 1697 in London. His father, Richard, was a classical scholar, but although well-educated, was not wealthy, making a precarious living as a schoolmaster, from writing Latin and Greek textbooks and, later, as a coffee house proprietor. The Hogarth family moved a number of times during Hogarth's early years, but always remained within the bustling East End of the city, near to Smithfield Market.

In 1705, William's older brother (also named Richard) died at the age of ten. Infant mortality rates were high and an older brother and two sisters had already died before Hogarth was born; only William and his sisters Mary and Ann survived to adulthood. Hogarth biographer, Jenny Uglow writes: "In those days, children were not kept away when sickness struck. Rooms were darkened, parents wept, and local women came in to lay out small bodies. Bereft of his older brother, [William] had to adjust to the new role as the eldest child."

Around 1708, the Hogarth coffee house failed and Hogarth's father fell into debt, resulting in him being detained in Fleet prison. The family moved to cramped rooms nearby in Black and White Court and Richard was allowed to join them at this address in 1709, the property being within the bounds of the wider prison jurisdiction. It is probable that his mother Anne and Wiliam himself, as the eldest son, worked to maintain the family during the four years that his father was imprisoned. Both London's East End and the area around Fleet Prison was impoverished and crime-ridden at the time, and it is probable that Hogarth's birthplace and childhood homes had a significant impact on his later career and choice of subjects.

During his father's incarceration, Hogarth is unlikely to have attended school as this cost money, but it is probable, given his competence in Latin and French, that his father tutored him in these subjects. At the age of 16, Hogarth was apprenticed to a silver engraver, engraving items such as watch cases, plates and cutlery, usually with heraldic designs. Although he quickly became bored by his work, Hogarth was a sociable and convivial character, and during his days as an apprentice enjoyed the hubbub of London life. He would visit coffee houses and theaters, befriending writers, musicians and actors and his love of the theater can be seen the theatricality of many of his later works. He also liked to walk, and would explore the city streets, sketching the characters that he saw around him.

In 1720, Hogarth left his apprenticeship early and, at the age of 23, successfully set up his own shop offering silver engraving as well as copper etched plates for printing business cards and book illustrations. It is not clear where he learnt this skill, but he was clearly adept at it by this date when he produced his own shop card by way of advertisement.

Eager to develop his drawing and painting, he started attending classes in St Martin's Lane and in 1724 he joined a drawing school at the home of history painter Sir James Thornhill, an artist he had long admired. At the age of 30, Hogarth began his painting career in earnest, and found success producing "conversation pieces" for wealthy patrons. These paintings showed groups of men and women at leisure and were rooted in the Rococo work of Antoine Watteau. He sometimes found these paintings tedious, however, and as a way of alleviating the boredom he also began to produce sketches and engravings of humorous everyday scenes, pieces that would pave the way for his later works of commentary on contemporary life.

In March 1729 Hogarth eloped with Thornhill's daughter Jane. They did not have any children, but had a long and happy marriage living in between London and the Essex countryside. The following year he began his work on his groundbreaking A Harlot's Progress, a series of six paintings (which he copied and circulated widely as prints) that told a story of a young women's corruption and subsequent decline in London. It was a critical and commercial success, bringing him recognition, and financial and artistic independence. The money generated by the work also allowed Hogarth and his wife to move to London's more fashionable West End. The series became so popular that it was widely copied and produced as cheap, inferior engravings for the mass market by Hogarth's competitors. As Hogarth received no payment for these copies and the poor nature of the artwork damaged his reputation, Hogarth lobbied parliament to provide legal copyright protection for engravers such as himself. This was passed in 1735 as The Engraving Copyright Act, also known as Hogarth's Law, and was one of the first of its kind in the world. Although he had completed The Rake's Progress, his second series of images, he waited to publish until the law was fully passed. Hogarth continued to socialize with other artists and designers, frequenting the well-known Old Slaughter's Coffee House on St Martin's Lane, a haunt for intellectuals. From here he set up the St Martin's Lane Academy in 1735, a precursor to the Royal Academy, which was not formally established until more than three decades later. Hogarth followed the same pattern for a number of his later works, producing a series of paintings, and then selling the prints of them at a price that targeted the new, moneyed middle classes. He saw real success from his series Marriage A-la-Mode (1745) which was aimed specifically at a middle-class audience in that it poked fun at the aristocracy. The six-part series told the story of the fictional aristocratic family The Squanderfields who had fallen on hard times. Their solution was to marry their son into a wealthy merchant family, but this marriage of convenience ended in disaster, as the final plate demonstrated.

Hogarth also continued to produce paintings and was a skilled portrait painter and colorist, but the success of his prints eclipsed public appetite for his painting. Around 1740 he produced a full-length portrait of philanthropist and founder of the Foundling Hospital, Captain Thomas Coram, which was widely praised and imitated. By 1751, however, Hogarth had become disillusioned by the disappointing amount of money his paintings made at auction. As writer Susan Elizabeth Benenson says: "Hogarth, in anger and mortification, retreated into aggrieved isolation, pursuing his philanthropic interests but adopting, in public, a defiant and defensive pose that involved him in increasingly rancorous debate on artistic matters." He took on a number of charitable roles and began to produce prints that were more focused on poverty and social issues. 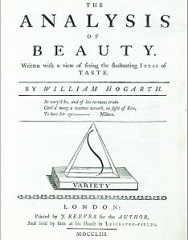 In 1753 he wrote The Analysis of Beauty, an aesthetic treatise in which he rejected the formal style and proportions of the Italian Old Masters, expressed the importance of variety in art, and pro-posed that the serpentine line was central to all forms of beauty. The book sold well, but also opened him up to criticism from the establishment and most prominently by the young artist, Paul Sandby who created a number of satirical prints directly targeting Hogarth and his work. The book was heavily influenced by Hogarth's own practices and it had limited impact on the work of other contemporary painters. In his enthusiasm for the serpentine line, however, Hogarth reflected the art and design of the Rococo and preempted its importance in the later Art Nouveau movement. In 1759 Hogarth produced a work entitled Sigismunda Mourning over the Heart of Guiscardo, which he had hoped would establish him as a respected history painter, but the wealthy patron who had commissioned it, Sir Richard Grosvenor, rejected it. It also received a number of poor re-views. Hogarth was furious and humiliated and in response to criticism, he removed it from exhibi-tion.

Hogarth returned to prints in 1762, producing The Times, a series of elaborate political allegories which shocked and divided the public. Offending right-leaning journalists, a counter attack was launched and Hogarth himself, again, became the subject of satire. Journalists and activists, John Wilkes and Charles Churchill accused Hogarth of falling into moral, mental and physical decline. A feud was born that lasted the rest of the artist's life. Hogarth died at home on October 25, 1764 from a ruptured artery and was buried near his second home in the countryside of Chiswick.

The Legacy of William Hogarth

Hogarth had been controversial among his peers. As Stephen Deuchar noted, when he was director of Tate Britain: "Hogarth's contemporaries found him always 'ingenious', variously zealous, flamboyant and self-righteous - a consummate operator and occasionally naive...His art was rarely considered to lie amidst the realms of greatness occupied by the Old Masters, whose uncritical devotees he so readily mocked." This statement is supported by the writings of Joshua Reynolds, first president of the Royal Academy, who rejected Hogarth's attempts at history painting. In 1788, Reynolds said Hogarth should be celebrated for inventing "a species of dramatic painting" and for his ability "to explain and illustrate the domestic and familiar scenes of common life", but that his ambitions in the "great historical style" were not only impudent but presumptuous.

Hogarth's work, however, did lay the foundations for the English School of Art, a movement which marked the emergence of a national artistic tradition. As art critic Jonathan Jones says: "Before Hogarth, there was not really any such thing as British art. There was art made in Britain, by such great European masters as Rubens and Van Dyck. But it was Hogarth who created the idea of a British school."

Though the artist was praised and remembered after his death - especially in terms of the variety of work he produced, Hogarth's legacy wasn't fully appreciated in his lifetime. As John Constable said: "Hogarth has no school, nor has he ever been imitated with tolerable success." Hogarth later found following in the Romanticism movement especially in literature. His series led the way in the exploration of individual experience, which became a key motif of 18th century novels.

Hogarth's work was also hugely important in promoting British painting and engravings abroad. He had a profound influence on James McNeill Whistler, who in 1901 campaigned for Hogarth's Chiswick home to be preserved for future generations, writing angrily that "I am told that nothing official has been done, either by the Government, or The Royal Academy, to keep in respect the memory of [the nation's] one 'Master' who, outside of England, still is 'Great'." Whistler had been given a book of Hogarth's engravings as a child, and was inspired by the artists' paintings - specifically his brushwork and use of color. His multi-focal compositions can also be seen as inspirations in the work of David Wilkie (who was celebrated as "the Hogarth of his day"), William Powell and Ford Madox Brown.

Today Hogarth is best recognized as a satirist, who, as art historian Mark Hallett notes "offered an acidic and sometimes comic vision of a society mired in corruption and hypocrisy, and who told remarkable pictorial stories about the flawed and ill-fated individuals - prostitutes, rakes, alcoholics, yokels, thieves and murderers - who lived and died outside the boundaries of respectable society".