The Venetian School - History and Concepts

Beginnings of The Venetian School

The Culture of Venice

While the Venetian School was informed by the innovations of Renaissance masters like Andrea Mantegna, Leonardo da Vinci, Donatello, and Michelangelo, its style reflected the roots of the very distinct culture and society of the Venice city-state. An emphasis on rich color permeated creation, bringing the atmosphere of the area and its people alive in a visual representation of the time. As art historian Evelyn March Phillipps wrote, "Venetian color, when it comes into its kingdom, speaks for a whole people, sensuous and of deep feeling, able for the first time to utter itself in art." Venice was known throughout Italy as "the serene city" due to its prosperity. Because of its geographical location on the Adriatic Sea, Venice had become a vital hub for trade, linking the West to the East. As a result the city-state was worldly and cosmopolitan, emphasizing the pleasures and riches of life, rather than driven by religious dogma, and proud of its independence and the stability of its government. The first Doge or Duke to rule Venice was elected in 697, and subsequent rulers were also elected by the Great Council of Venice, a parliament made of aristocrats and wealthy merchants. Magnificence, entertaining spectacles, and lavish feasts marked by carnivals that went on for weeks, defined Venetian culture, and became part of its joyous artistic sensibility. Unlike Florence and Rome, which were under the sway of the Catholic Church, Venice was primarily associated with the Byzantine Empire, centered in Constantinople that ruled Venice in the 6th and 7th centuries. As a result, Venetian art was strongly influenced by the Byzantine use of bright colors and gold in church mosaics and Venetian architecture was informed by the Byzantine use of domes, arches, and multi-colored stone, inspired in part by the Islamic architecture of the Middle East.

By the mid-1400s the city was a rising power in Italy, and Renaissance artists like Andrea Mantegna, Donatello, Andrea del Castagno, and Antonello da Messina visited or lived in Venice for extended periods of time. The Venetian School style synthesized Byzantine color and golden light with the Renaissance innovations of these artists. The artist Andrea Mantegna first introduced the linear perspective, naturalistic figurative treatment, and classical proportionality that defined Renaissance art to Venetian artists as he worked in nearby Padua, his native town, on his Stories of St. James (1448-1457). His work was to profoundly influence Jacopo Bellini who became one of the first Venetian artists to employ linear perspective, and taught the technique to his sons, Gentile and Giovanni, later leaders of the Venetian School. A lifelong artistic and familial connection developed, as Mantegna married one of Jacopo's daughters. Mantegna's influence can be seen in Giovanni Bellini's The Agony in the Garden (c. 1459-1465) referencing Mantegna's The Agony in the Garden (c. 1458-1460), both paintings based upon a drawing by Jacopo Bellini. 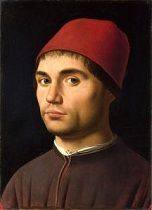 Antonello da Messina worked in Venice from 1475-1476 and had a noted impact on Giovanni Bellini's adoption of oil painting and emphasis on portraiture. Credited with introducing oil painting to Italy by Giorgio Vasari, Antonello first encountered the art of the Northern European Renaissance while he was a student in Naples. As a result, his works were noted for their synthesis of Italian Renaissance and Northern European principles and influenced the development of the Venetian School's distinctive style. Pioneering oil painting in Venice, Giovanni Bellini has been called the "Father of Venetian painting." Both he and his older brother Gentile were renowned, making the Bellini family workshop the most popular and celebrated in Venice. Important early commissions by the Bellini brothers were primarily religious subjects like Gentile's Procession of the True Cross (1479) and Giovanni's work depicting the Deluge of Noah's Ark (c. 1470), now lost. Giovanni Bellini was particularly popular for his treatments of the Madonna and Child, a subject for which he had a deep affinity, and his depictions combined a kind of devotional gravity with a sense of charm and delight in the light and color of the world itself. However, it was Giovanni's emphasis on depicting natural light, and synthesizing Renaissance principles with Venetian color, that made him the leader of the Venetian School. By the early 1480's Giovanni Bellini, shaking off the influence of Mantegna, had mastered oil painting as seen in his Transfiguration of Christ (c. 1480). He pioneered the Venetian School's emphasis on portraying natural light and atmosphere by employing color and tonal gradations. His Doge Leonardo Loredan (1501) established the Venetian School's stylistic treatment of portraiture and the importance of the genre in Venice. In later works, he turned to mythological subjects, like his Feast of the Gods (1504), which established a new genre of painting. Writing from Venice in 1506, Albrecht Dürer described Bellini as "the best painter of all." He was also a noted teacher, as both Giorgione and Titian, subsequent leaders of the movement, were trained in his workshop.

Giovanni Bellini was the first great portraitist among Venetian artists, as his Doge Leonardo Loredan (1501) created a compelling image that, while naturalistic and conveying the play of light and color, idealized the subject and his social role as leader of Venice. The much-acclaimed work fueled the demand for portraiture by aristocrats and wealthy merchants, who sought a naturalistic treatment that simultaneously conveyed their social importance. Paolo Veronese also painted noted portraits, as seen in his Portrait of a Man (c. 1576-1578) showing a full-length view of an aristocrat dressed in black standing against a pediment with columns. Jacopo Tintoretto was also known for his compelling self-portraits. Bellini pioneered the mythological subject in his Feast of the Gods (1504). Titian further developed the genre into depictions of bacchanal scenes such as his Bacchus and Ariadne (1522-1523), painted for the Duke of Ferrera's private chamber. Venetian patrons were particularly drawn to art based upon classical Greek myths, since such subjects, unconstrained by religious or moralistic messages, could be enjoyed for their eroticism and hedonism. Titian's work included a wide range of mythological subjects, as he created six large paintings for King Phillip II of Spain including his Danae (1549-1550), a woman seduced by Zeus disguised as sunlight, and his Venus and Adonis (c. 1552-1554) depicting the goddess and her mortal lover. Mythological contexts also played a role in launching the genre of the female nude, as Giorgione's Sleeping Venus (1508), which pioneered the form. Titian further developed the subject by emphasizing an eroticism played toward the male gaze as in his Venus of Urbino (1534). Their titles placed both works within a mythological context, though their pictorial treatments elided any visual references to the goddess. Other works by Titian were to include such references as seen in his Venus and Cupid (c. 1550). The mythologizing impulse, so popular among the Venetians, also influenced their development of contemporary scenes as dramatic spectacles, as seen in Veronese's Feast in the House of Levi (1573) painted on a monumental scale, measuring eighteen by forty-three feet. 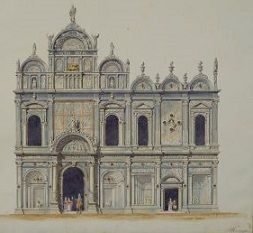 A coastal city noted for its system of canals, Venice had little solid ground upon which to build. As a result, many architectural projects involved redesigning buildings, often by creating new facades. The first architects of the Venetian Renaissance were the brothers Antonio and Tullio Lombardo, who rebuilt the Scuola di San Marco (c. 1490). Trained as sculptors, they carved the façade in relief to create an illusionistic perspective. While Renaissance innovations via the work of Filippo Brunelleschi, Leon Battista Alberti, and Donato Bramante did influence Venetian architects, it was the Byzantine and Gothic tradition that continued to dominate architectural design. That changed in the 1500s, when the sculptor and artist Jacopo Sansovino moved to Venice after the 1527 Sack of Rome. Appointed chief architect of Venice in 1529, he was commissioned to design various public buildings in St. Mark's Square. His love of High Renaissance ideals led him to create a new style incorporating classical traditions alongside the Venetian love of lavish decoration. His masterpiece was the Biblioteca Marciana (1537-1587), the Library of Saint Mark's, praised by Andrea Palladio as the "best building since Antiquity." 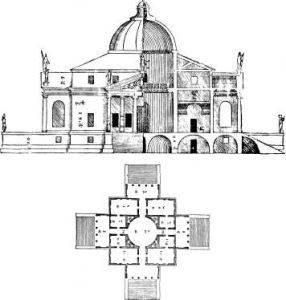 The greatest and most influential of Venetian architects, Andrea Palladio, was known not only for his designs but his Il Quattro Libri dell' Architettura (The Four Books of Architecture) (1570), which included his architectural rules and concepts and was widely read throughout Europe. The Humanist scholar and architect Gian Giorgio Trissino was Palladio's lifelong mentor. Trissino, a friend of Leonardo da Vinci in Milan, was influenced by Leonardo's designs employing radial symmetry and his interest in the architectural principles of Vitruvius. As a result, Palladio employed Vitruvian classical elements and mathematical proportions but reinterpreted them toward simple designs that, using locally available and inexpensive construction materials, were easily reproducible. Though he designed the Venetian churches San Giorgio Maggiore (1565) and Il Redentore (1576), he was primarily known for his residential architecture. His country villas and city palazzos became the standard for aristocratic homes.

Later Developments - After The Venetian School

The Venetian School declined around 1580, in part due to the impact that the plague had upon the city as it lost a third of its population by 1581, and in part due to the deaths of the last living masters, Veronese and Tintoretto. Both artists' later works, emphasizing expressive movement rather than classical proportions and figurative naturalism, had some influence upon the development of the Mannerists that subsequently dominated Italy and spread throughout Europe.

However, the Venetian School's emphasis on color, light, and delight in sensory life, as seen in the works of Titian, also created a contrast with Mannerism's more cerebral approach, and informed the Baroque works of Caravaggio and Annibale Carracci. The Venetian School had an even greater influence beyond Venice, as kings and aristocrats from throughout Europe avidly collected the works. Artists in Antwerp, Madrid, Amsterdam, Paris, and London, including Rubens, Anthony van Dyck, Rembrandt, Poussin, and Velázquez, were widely influenced by Venetian art. The story goes that Rembrandt, when told as a young artist to visit Italy, replied that it wasn't necessary, because "it was easier to see Italian Renaissance art in Amsterdam than to travel from town to town in Italy itself."

Modern art is hardly imaginable without the influence of Titian, as critic Jonathan Jones noted, "The three most influential post-Renaissance painters, Velázquez, Rubens and Rembrandt, were devoted to Titian - Rembrandt modeled one of his own self-portraits on Titian's A Man with a Quilted Sleeve (c. 1510); Velázquez learned his luxurious style from Titians in the Spanish royal collection; Rubens copied many of his paintings." That influence has continued into the modern era as artists like Francis Bacon and Chris Ofili have noted his influence.

In architecture Palladio was equally influential, particularly in England where Christopher Wren, Elizabeth Wilbraham, Richard Boyle, and William Kent embraced his style. Inigo Jones, called "the father of British architecture," built the Queen's House (1613-1635), the first classical inspired building in England based upon Palladio's designs. As a result the British 17th century became dominanted by the "Palladian" style, and in the 18th century, Palladio's designs informed the architecture in the United States. Thomas Jefferson's design for his home at Monticello and for the U.S. Capitol building were predominantly influenced by Palladio and Palladio was named "Father of American architecture" in a 2010 decree by the U.S. Congress.

Important Art and Artists of The Venetian School