French Baroque architecture (sometimes called French Classicism) combined the scale and drama of Italian Baroque with Greek and Roman theories of harmony to create monumental buildings that demonstrated power and majesty. It developed under the patronage of King Louis XIV (1643-1715) whose reign marked a period of cultural and economic prosperity for France. The Palace of Versailles (1661-1770), designed by Jules Hardouin-Mansart and Charles Le Brun, is the most famous example of the style and the building and its grounds did much to promote ideas of national identity through architecture as well as the importance of uniting design and decoration to create a complete whole (a concept later given the name Gesamtkunstwerk). These ideas informed the development of Beaux-Arts Architecture, in that it promoted the importance of unified decorative schemes and was initially viewed as a uniquely French national style.

Originally founded in 1648, by the 19th century, the Academy was responsible for both the official Salon, an exhibition that could make or break an artist's career, as well as an elite art school teaching painting, sculpture, and architecture. The school's system of education was highly competitive and rigorous, as students were taught in the atelier, or studio, teaching system. Each year students could compete for the Grand Prix de Rome, which included a fellowship of three to five years in Rome. By the early 1800s, however, the Academy had also become rigidly conservative with the result that innovation in painting was led by artists associated with Romanticism, Realism, and other new movements, in opposition to the tight strictures of the Academy. The Academy's approach to architecture was equally conservative, but a new generation of architects began to challenge this. Four students of the school, Joseph-Louis Duc, Félix Duban, Henri Labrouste and Léon Vaudoyer each won the Prix de Rome in consecutive years (1823-26), allowing them to study together in Rome at the Villa Medici. Here, they began creating innovative designs that questioned the strict standards of the school's Neoclassical aesthetic. In 1829, Labrouste's reconstruction of the temple complex in Paestum, Italy, stirred debate about the nature of classical architecture and the educational goals of the school. He argued that the site, which had been much studied as "primitive" as its columns were considered disproportionately short, instead reflected the artistic desire of the designers "to create a new architecture". This pitted Labrouste against some members the Academy as his argument necessitated questioning their long-held beliefs in the purity of classical architecture and in challenging the academic dogma of the institution, he opened up a new field of reference for architects to draw on. Incorporating elements of Baroque, Renaissance, Gothic, and Romanesque architecture into their designs, the four students sought to create a new and authentic French style. As Labrouste argued, "a building should reflect and express the specific region in which it is built" and Duban advocated for "the importance of achieving a national character in architecture". Their work was timely and reflected wider trends in historicism, including a surge in interest in the Middle Ages caused by the publication of The Hunchback of Notre Dame by Victor Hugo in 1831 and early ideas in building conservation exemplified by the creation of the Commission of Historic Monuments in 1837. Despite the early antagonism with some members of the Academy's faculty, Beaux Arts architecture was quickly accepted as a modification of the current Academic Style and began to be disseminated through the Academy itself. This may be attributed to the fact that Beaux Arts continued to draw heavily on classical aesthetics, offering continuity between the two. By the early 1830's the young architects had, not only, become leaders among their contemporaries but also received major commissions and the favor and patronage of King Louis Philippe. Duban designed the new building for their alma mater, the Académie des Beaux-Arts, which was renamed the École des Beaux-Arts in 1863 (1832-64) and Labrouste designed the Bibliothèque Sainte-Genevieve (1838-50). Becoming noted teachers, Vaudoyer, Duc, Duban, and Labrouste also taught the next generation of architects, including and Edmond Jean-Baptiste Paulin, and Charles-Auguste Questel. Richard Morris Hunt, the first American admitted to the École des Beaux-Arts in 1846, introduced Beaux Arts architecture to the United States, when he returned in 1855. It was, later, brought to widespread attention through the buildings of Chicago's World Columbian Exposition in 1893. Designed by noted architects, including Burnham, Atwood, and Olmstead, the monumental designs were nicknamed the White City and were seen as the perfect expression of the Gilded Age, a period of great wealth. The designs sparked the City Beautiful movement which sought to reform American architecture and urban planning along Beaux Arts lines. The tenets of the movement were adopted by various American cities, with the most notable example, the Macmillan Plan (1902-26). Named for the U.S. Senator that initiated it, it was a redesign of the National Mall in Washington D.C. American architects added their own innovations to the Beaux-Arts style, as shown in Hunt's incorporation of Châteauesque features, based on French Renaissance country houses, into his designs for Biltmore House, a private mansion created for George Vanderbilt. Henry Hobson Richardson combined Beaux-Arts spatial planning with Romanesque elements to create a unique style that became known as Richardsonian Romanesque. Charles Follen McKim, William Rutherford Mead, and Stanford White, known by their firm's name McKim, Mead, and White, dominated American architecture at the fin de siècle. The firm transformed American architecture between 1879 and 1912, employing a hundred designers, executing over a thousand commissions, and pioneering a modern architectural process where they developed procedures for managing every step of a project. As the 1900's progressed, American Beaux-Arts architects, facing the challenges of the emerging modernist movement, emphasized a return to a less-ornamented and pure classical style, as shown in Henry Bacon and Daniel Chester French's famous Lincoln Monument (1914-22) in Washington D.C. 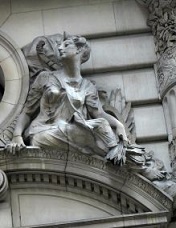 The Beaux-Arts style emphasized architecture parlante, meaning "speaking architecture," the concept that the building should engage in a dialogue with the viewer, thereby explaining its own function. As a result, each decorative element was connected to the building's purpose or situation. Words or names of noted artists or musicians were carved into steps, panels, or elevated bands, shields were placed above entrances, and panels were highly decorated with symbolic motifs. At the same time, Beaux-Arts architecture also considered the building within its wider context, representing and communicating current social values. Beaux-Arts architecture was informed by the Industrial Revolution, which began in Britain, and as economist and philosopher Friedrich Engels wrote, "changed the whole of civil society." However, it was a Frenchman, Louis-Guillaume Otto, who first coined the phrase "Industrial Revolution" in 1799 to describe his country's race to modernize following the chaos of the French Revolution. The code civil, or Napoleonic code, was established in 1801 replacing various tariffs and guild restrictions with the rule of law, stabilizing the national currency, and creating public roads, canals, and the railway system. Mechanized factories, steam power, iron making, and the invention of machine tools led to mass production of various products and to rapid urbanization. In this new era, Henri de Saint-Simon and Auguste Comte were the leading thinkers. Saint-Simon developed the concept of industrialism, where he argued that the recognition of the value and needs of the working class were necessary both to society and the economy. Comte, who worked for a time with Saint-Simon, developed a positivist philosophy of social evolution, believing that, "the only knowledge available to human kind is that of science grounded in observation". Saint-Simon and Comte's ideas influenced the leading philosophers of the 19th century, including Karl Marx, Friedrich Engels, and John Stuart Mills. The Beaux-Arts movement was informed by this rationalist and positivist approach and felt employing the technology, materials, and processes of the Industrial Revolution would create new buildings that gave expression to civic pride and social progress. In the same manner, they were particularly keen to incorporate the new technology of cast iron into their designs, creating iron frameworks that allowed buildings to be built on a grander scale, while also being more affordable and having shorter completion times. Apart from a few specific buildings, Beaux Arts had little impact elsewhere in Europe, with architects more likely to utilize their own national styles. The style, however, had a significant effect in the United States between 1880 and 1920, where it was also known as American Renaissance or American Classicism. Interestingly, there was also a fashion for Beaux- Arts designs in Argentina where the ruling classes admired and imitated French aesthetics. The style was first introduced to the country in 1868 by Julio Dormal, a Belgian who had studied at the École des Beaux-Arts, and it continued to be employed into the modern era as seen in Bustillo and Ángel Guido's design of the monumental National Flag Memorial (1957). Beaux-Arts architecture had declined in France by the beginning of the 19th century as it was overtaken by the modern movements of Art Nouveau and, later, Art Deco. The aesthetics and ideas behind Art Nouveau were a clear a rejection of Beaux Arts, although it is possible to note some common themes between the two, particularly the use of new technologies. Although Art Deco also remained a separate movement in Europe, in the United States, elements of Beaux Arts were incorporated into Art Deco designs, creating public buildings which can be seen as an amalgamation of the two. This is particularly prominent in buildings completed between 1933 and 1944 as part of the Public Works Administration, when the fusion of the two styles became known as PWA Moderne. Labrouste's work has slowly been re-evaluated in the modern era, beginning with Sigfried Gideon's 1928 argument that his pioneering and exposed iron structures can be seen as leading to the unadorned steel columns of Le Corbusier. Labrouste's rationalist approach and use of modern architecture can be seen as influencing Ludwig Mies van der Rohe and Norman Foster.

From the 1970s some postmodern architects began to reject modern functionalism and instead sought inspiration in historic architectural styles, combining elements from different eras to create an eclectic and, sometimes, contradictory appearance. Beaux Arts features such as classical columns, arched windows, and decorative statuary made a reappearance in the designs of architects such as Robert Venturi, Thomas H. Beeby, and Robert A. M. Stern.

In 1963, following the destruction of Pennsylvania Station, a Beaux-Arts building designed by McKim, Mead and White, Henry Hope Reed Jr. launched the Classical America organization. Advocating for the practice of classical training and the appreciation of classical buildings, the organization was renamed in 2002 as the Institute of Classical Architecture and Art. The Institute has a peer-reviewed journal and a number of programs, including the Beaux Arts Atelier, which emphasizes education in classical architecture, based upon the teachings of the École des Beaux-Arts. In Belgium, Leo Krier and Maurice Cult have advocated for classical projects, and in Britain Quinlan Terry became a leading proponent of the New Classical Architecture movement. He was described in 2006 by art historian David Watkin, as "the single most distinguished and prolific architect at work in the Classical tradition". The American New Classical architect Thomas Gordon Smith, as chair of the School of Architecture at the University of Notre Dame, has been an influential advocate for classical studies and practices, with the result that a number of universities, including The University of Miami, Andrews University, the University of Colorado, offer classical architectural programs.

Commercial architecture also continues to reflect the Beaux-Arts influence as noted resorts and upscale boutiques, employ classical facades done in ironwork. The Beaux-Arts style has also had a continued cultural presence, as its masterworks are among the most visited international tourist attractions and are used in popular media and advertising as iconic and instantly recognizable edifices that express the character of Paris, New York or other major cities.