Jacques Lipchitz was born Chaim Jacob Lipschitz to a Jewish family in Druskininkai, a small town in the former Russian empire (modern-day Lithuania). His father, Abraham Lipchitz, a building contractor, was rarely home, leaving the rearing of Lipchitz largely to his mother Rachel. In keeping with his father's wishes, Lipchitz began studying engineering. It was thanks to his mother's encouragement, however, that the young Lipchitz at age 17 gave up engineering and moved to Paris in 1908. Although his father was disappointed, Lipchitz later said that "after I went to Paris, my father forgave me and as long as he was able to, he contributed to my support."

In Paris, Lipchitz adopted the French first name "Jacques" and enrolled in the École des Beaux-Art as well as the forward thinking Academie Julian. He soon made contact with members of some of the most avant-garde artistic groups of the period, which were flourishing in Paris. The young emigre became friends with ground-breaking artists such as Amedeo Modigliani, Pablo Picasso, Juan Gris, and Diego Rivera. He later recounted anecdotes about the relationships between these figures and the influence they exerted on one another and their work. He recalls in particular one occasion when the artist Juan Gris told him "about a bunch of grapes he had seen in a painting by Picasso. The next day," recalled Lipchitz, "these grapes appeared in a painting by Gris, this time in a bowl; and the day after, the bowl appeared in a painting by Picasso."

Under the influence of Picasso and Alexander Archipenko in particular, Lipchitz began creating his first Cubist sculptures in 1913. This was a particularly formative phase for the sculptor, as it was for so many artists living in Paris at that time. He later claimed that "the period during the First World War was a very exciting time in Paris, with artists, philosophers, and poets continually discussing and arguing about the work with which they were involved." 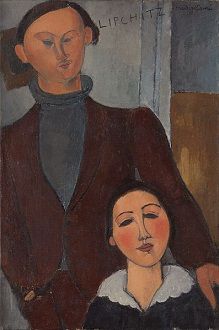 In 1916, Lipchitz and his new wife Berthe, a Russian poet, sat for one of Modigliani's best-known portraits. The couple is depicted in their Paris apartment, which had formerly been the home of the sculptor Constantin Brancusi. Curator Neal Benezra notes that Lipchitz and Modigliani, although close friends, could not have been more different. "Lipchitz," explains Benezra, was "a model of artistic industry and traditional values" whereas Modigliani," he continues, "was the stereotypical peintre maudit ("cursed" or "doomed painter"), tragically doomed by his own vices." 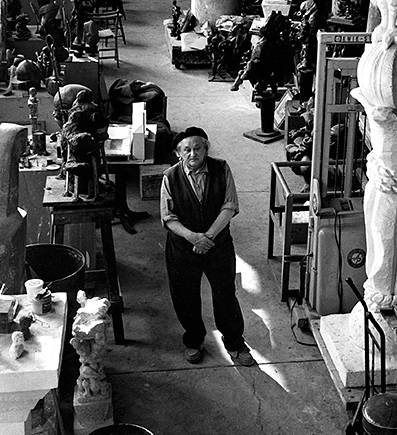 In 1925 Lipchitz became a French citizen, living and working on the outskirts of Paris in a house he commissioned from the radical Swiss-French, architect Le Corbusier (born Charles-Édouard Jeanneret-Gris). During the 1930s, Lipchitz's work was exhibited internationally and he received the gold medal for sculpture at the 1937 Paris Exposition. However, when the Germans occupied Paris in 1940, the artist's Jewish heritage placed him in grave danger and he was forced to flee to the United States, taking up residence in New York City. He later said of this upheaval, "I had been forced to leave everything - my studio, my house, my collection - and I was reconciled to the idea that everything was lost or destroyed. I had begun a new life in the United States." The persecution of Jewish people by the Nazis caused Lipchitz to engage more actively in his religion and in his later years he sought the spiritual help of a Rabbi. Lipchitz eventually found some religious catharsis through the sculpture that he created in the 1940s.

When they visited Paris for an exhibition after World War II, his wife Berthe informed Lipchitz that she didn't wish to return to the USA. The couple was subsequently divorced and he continued to live in America, settling in Hastings-on-Hudson, a northern suburb of New York City. Soon after, he met and married Yulla Haberstadt, a sculptor from Berlin. In 1958, he suffered a major hemorrhage due to stomach cancer. Although he survived it, the illness comprised a significant setback for the artist. However, he continued to produce art until his death on the Italian island of Capri in 1973, where he had a villa and studio near a respected foundry. After his death his body was flown to Jerusalem for burial.

The Legacy of Jacques Lipchitz

Lipchitz will be remembered for his achievements in the development of Cubism, particularly in his transformation of the formal characteristics of the style from painting into three-dimensional works. Along with Picasso, his work influenced many artists, including Henri Laurens and Umberto Boccioni, who was instrumental in developing Italian Futurist sculpture. Lipchitz' influence is particularly notable in the work of his student.