Utagawa Hiroshige, born as Andō Tokutarō in 1797, was the only son of Andō Gen'emon. Hiroshige's name changed regularly as a child; he was also known as Jūemon, Tokubē, and Tetsuzō. The Andō family were Samurai, the highest ranking of the four Japanese castes, and consequently entitled to a hereditary post as fire wardens in the civil service. They lived in the Yayosu Riverbank area of Edo, now known as Tokyo, which had become capital of the Japanese empire in 1603. There is little documentation of Hiroshige's personal life or attitudes, but that which is known suggests his upbringing was distinguished by tragedy, beginning with the death of an elder sister when he was three; Hiroshige's mother died in 1809, when the artist was eleven, and his father died several months later, after his twelfth birthday.

Shortly before his death, Hiroshige's father passed his hereditary title to his son, providing Hiroshige with a salary capable of supporting two people comfortably and a profession which was comparatively relaxed; many of those working in the fire service pursued other occupations, including art, alongside it. It is unclear how Hiroshige came to be interested in art and why or when he chose printmaking as his medium. There are stories suggesting a friend of his father's, Okajima Rinsai, who worked in the fire service, introduced the young artist to painting when he was nine, but these are likely to be apocryphal.

Hiroshige was inspired by the popular artist Toyokuni, but was rejected when he applied to join his school. In 1811, Hiroshige was accepted as a pupil to Utagawa Toyohiro, an Ukiyo-e artist specializing in prints of actors from kabuki theatre and other figures. Hiroshige took his master's name, Utagawa, as was traditional, and combined different readings from characters in his master's name and his own in order to form the professional name by which he was consequently known, Utagawa Hiroshige. Following his master, Hiroshige began his career producing woodblock images of kabuki figures, beautiful women and narrative illustrations of comic poems. He continued to support his development as an artist through his work as fire warden.

Hiroshige married the daughter of a fireman, Okabe Yuaemon, in 1821, and their first son, Nakajirō, was born in the same year. He continued to create prints focused on figures until 1829, when he began work on the landscapes for which he would become well-known. In 1831, inspired by Katsushika Hokusai, who had recently begun to revitalize the landscape genre, Hiroshige published the ten-part series Famous Views of the Eastern Capital.

Hiroshige passed his position as fire warden to his son, Nakajirō, in 1832. This was an unusually early retirement from the civil service and his reasons for it remain unclear; some have suggested that it was due to an earlier mistake in genealogy, stemming from his father's adoption into the Andō family, which may have jeopardized his claim to the position. Experts agree that Hiroshige did not give up the position in order to devote himself to printmaking, but his consequent freedom from other responsibilities meant that he soon became a prolific artist.

In the same year, Hiroshige joined an official procession travelling along the Tokaidō, the road that connected Edo, the new capital, with Kyoto, site of the imperial court. This journey, along Japan's major pilgrimage route, took between ten and sixteen days on foot and passed numerous temples, shrines and culturally significant landscapes. While the group that Hiroshige joined travelled along the road in order to deliver horses to the court, others often travelled for pleasure, reveling in local scenery and in food and beverages available at the waystations along the route. This journey led to Hiroshige's first significant series, 53 Stations of the Tokaidō, completed in 1834.

Having discovered his talent for landscape, Hiroshige worked quickly and continuously from 1834 to 1839, when much of his best work was produced and published. Hiroshige's lifestyle and finances during this period, however, remain unclear; some hypothesize that he lived a typical middle-class existence, drinking frequently and eating well, while others claim his habits were more modest. The decade, however, appears to have been difficult, with the Great Tenpō famine causing food scarcity nationally. Hiroshige's wife is believed to have sold clothing and accessories in order to support his work, providing the necessary funds for travel. She, however, died in 1839, halting his production briefly. Hiroshige's talent for landscape placed him in a better position than many other ukiyo-e artists, as the shogunate banned prints of actors and courtesans, in 1842, in a bid to improve the moral health of the nation. While others followed the traditional approach of showing landscape and significant pilgrimage sites as spectacular and idealised, Hiroshige combined visions of the countryside with the language of the popular print and seized upon the zest for travel, providing audiences with groups of prints that evoked the experience of travel and the public with a sense of collective ownership over the national landscapes, previously considered to be solely as property of the imperial family. Hiroshige's head was described as being "round as a dumpling". It is the only known likeness of the artist.

In 1847, Hiroshige married for the second time, choosing a farmer's daughter, Oyasu, around fifteen years younger than him. The pair moved, in 1848, to Kanōshindō, another district of Edo, where Hiroshige borrowed money to build a new house, and adopted a daughter, Tatsu. Tatsu would go on to marry two of Hiroshige's pupils, divorcing Hiroshige II before marrying Hiroshige III.

In these years, Hiroshige produced triptychs depicting beautiful women and educated a number of pupils who, as was traditional, took on his name. His three pupils were not successful as artists, though it is unclear whether this is due to a poor choice of pupils or poor teaching methods on Hiroshige's part. In 1856, he decided to become a Buddhist monk, which involved shaving his head. He continued to produce art, including One Hundred Famous Views of Edo, in 1857, which had a considerable impact in Europe due to Hiroshige's vivid colors and unconventional perspectives. 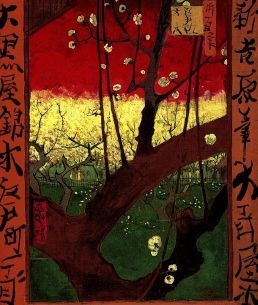 In 1858, Hiroshige fell ill, likely due to the cholera epidemic that took 28,000 lives in Japan. He dictated a poem as he died:
"I leave my brush at Azuma,
I go to the Land of the West on a journey
To view the famous sights there."

He was 62 years old and was buried in a Zen Buddhist temple in Asakusa. He had, over the course of his lifetime, produced over 5,000 print designs, of which many copies were made.

The Legacy of Utagawa Hiroshige Hiroshige is considered to be the last great ukiyo-e master and his influence can be more obviously traced in Europe than Japan, as the great cultural shifts of the Meiji Period caused Japanese artists to look abroad for inspiration. Hiroshige's lyricism and brilliant use of color resonated with French and Dutch painters, in the late nineteenth and early twentieth centuries, similarly searching for new ways to approach landscape. Vincent van Gogh made copies of Hiroshige's prints in order to learn from them and the artist's influence can be seen in van Gogh's use of vibrant yellows and oranges alongside blues. Édouard Manet's approach to foreshortening was influenced by Hiroshige, while Art Nouveau artists and designers were inspired by Hiroshige's stylised depictions of delicately curved trees and flowers. Hiroshige's work was particularly influential in shaping the Japonism movement, in which painters such as James McNeil Whistler and James Tissot borrowed both the style of Hiroshige's prints and used representations of similar work as indicators of taste within domestic interiors. In the late nineteenth century, the popularity of ukiyo-e prints was such that they were seen as indicators of knowledge, taste and wealth that could be deployed in portraits or interiors in order to bestow these qualities upon their owner. This is particularly obvious in Whistler's 1864 Caprice in Purple and Gold: The Golden Screen, in which Whistler's model, Joanna Hiffernan, is shown looking at prints from Hiroshige's Views of the Sixty-odd Provinces, which Whistler himself owned, wearing a kimono beside a Japanese screen.

More recently, Hiroshige's work has had an impact on Julian Opie, whose own flat aesthetic borrows from that of Hiroshige's woodblock prints, and Nigel Caple, who created a series of drawings along the Tōkaidō after those of Hiroshige. Hiroshige's landscapes, alongside those of Hokusai, are also widely understood to have shaped the development of contemporary manga; scenes depicting longing or the passing of time frequently draw upon Hiroshige's references to seasonal festivities.