"Look at what lies at your feet! .. A crack in the ground, sparkling gravel, a tuft of grass, some crushed debris, offer equally worthy subjects for your applause and admiration."
2 of 5

"For me, insanity is super sanity. The normal is psychotic. Normal means lack of imagination, lack of creativity."
3 of 5

"Unless one says goodbye to what one loves, and unless one travels to completely new territories, one can expect merely a long wearing away of oneself and an eventual extinction."
4 of 5

"In the name of what - except perhaps the coefficient of rarity - does man adorn himself with necklaces of shells and not spider's webs, with fox fur and not fox innards? In the name of what I don't know. Don't dirt, trash and filth, which are man's companions during his whole lifetime, deserve to be dearer to him and isn't it serving him well to remind him of their beauty?"
5 of 5

Jean Dubuffet disliked authority from a very early age. He left home at 17, failed to complete his art education, and wavered for many years between painting and working in his father's wine business. He would later be a successful propagandist, gaining notoriety for his attacks on conformism and mainstream culture, which he described as "asphyxiating." He was attracted to the art of children and the mentally ill, and did much to promote their work, collecting it and promulgating the notion of Art Brut. His early work was influenced by that of outsiders, but it was also shaped by the interests in materiality that preoccupied many post-war French artists associated with the Art Informel movement. In the early 1960s, he developed a radically new, graphic style, which he called "Hourloupe," and would deploy it on many important public commissions, but he remains best known for the thick textured and gritty surfaces of his pictures from the 1940s and '50s.

The painting Apartment Houses, Paris focuses on urban life. The buildings are tilted, playfully defying architectural integrity. The flattening of the space between the sky, buildings, and civilians seems spontaneous and unprocessed - childlike. Here Dubuffet satirizes conventional, sentimental images of Paris, suggesting instead that the jollity of the city's inhabitants is forced and false.

Oil with sand and charcoal on canvas - Private Collection

Grand Maitre of the Outsider

This picture is typical of the Hautes Pates series that Dubuffet exhibited to huge controversy in 1946. A thick, monochromatic surface serves as the ground for the crudely depicted figure, which is a parody of portraiture. Although Dubuffet undoubtedly intended the series to offend and his graphic style and thick, coarse impasto certainly did offend conventional tastes, it is worth noting that the color palette is not as jarring as it might be. Dubuffet was at least cautiously mindful of the need for success.

The Cow With The Subtle Nose

Dubuffet's heady experience in the country and rejection of art education is evident in this painting. The heavily textured surface depicts a cow, rendered in the childlike innocence of patients held in psychological facilities. The uninhibited, savage approach to the canvas exemplifies the concepts of what Dubuffet termed Art Brut - the image seems entirely unschooled in the traditions of landscape. The image is thus at odds with the notions of "high art," and approaches art making from the direction of artistic purity uninfluenced by cultural advancement. Going a step further, Dubuffet suggests how "cultural" and "savage" approaches to art together work to reaffirm civilization as a whole.

Oil and enamel on canvas - The Museum Of Modern Art, New York

Soul of the Underground

Soul of the Underground exemplifies Dubuffet's fascination with texture and his departure from representational painting. Inspired by the surface quality of Jean Fautrier's paintings, Dubuffet's use of aluminum foil and oil paint creates a coarse, uneven surface resembling mineral deposits. Here Dubuffet completely abandons pictorial representation in order to evoke sheer matter and sheer unprocessed material. It is part of a series of Texturologies that he worked on throughout the 1950s as he became more interested in evoking different sorts of texture.

After the horrible destruction of World War II, mud and dirt is what remained in plentitude. Rather than proclaiming that civilization had ceased, Dubuffet wanted to use the rubble to build anew and to purify for the future. In addition, the dirt is thought of as a material that has a natural structure that can be discovered, explored, and put to new uses.

Oil and aluminum foil on composition board - The Museum Of Modern Art, New York

Dubuffet's L'Hourloupe series began in 1962 and would preoccupy the artist for many decades. The inspiration came from a doodle he created while on the telephone, in which the fluid movement of line combines with limited fields of color to create movement. He believed the style evoked the manner in which objects appear in the mind. This contrast between physical and mental representation later encouraged him to use the approach to create sculpture.

Monument with Standing Beast is another sculpture based on Dubuffet's Hourloupe series. The piece is one of his three monumental sculptures based in the United States. The sculpture is an abstract representation of a tree, a standing animal, and an architectural structure. The work evokes graffiti and cartoons, though it also plays on the contrast between mental images and real objects. The visitor is invited to wander and contemplate within the black and white walls of the sculpture. 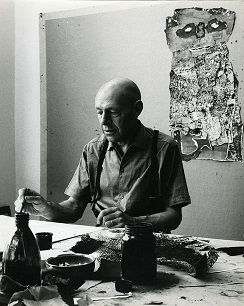 Books
websites
articles
video clips
More
Books
The books and articles below constitute a bibliography of the sources used in the writing of this page. These also suggest some accessible resources for further research, especially ones that can be found and purchased via the internet.
biography
written by artist
paintings
View more books
websites
articles
video clips
More
audio clips