Born into a well-to-do family in Paris, Jean-Baptiste-Camille Corot was raised in the millinery shop owned and operated by his parents. The business was fashionable and successful, his mother's hat-making earning her a considerable reputation among the Parisian elite, and Corot's childhood was passed in a comfortable and creative setting. However, though he received a classical education at the Collège du Rouen, Corot was a listless student, described by early biographers as shy, awkward, and unimpressive. At his father's insistence, he took up an apprenticeship to a draper - his father's trade - but found it unfulfilling and dull, and duly enrolled in evening drawing classes at the privately run Académie Suisse. Though his parents were reluctant to allow him to pursue a career as a painter, they relented after the death of their younger daughter, even granting him an allowance, so that he could devote himself to his studies with a degree of financial independence.

In 1822, the 26-year-old Corot joined the studio of the landscape painter Achille Etna Michallon, rejecting the academic prestige of the Ecole des Beaux-Arts. In the event, Michallon died unexpectedly and tragically young just three months after Corot commenced his training, but Michallon's Neoclassical technique - he had studied under Jacques-Louis David - and love of nature would have an abiding influence on his pupil. Corot later recalled making his "first landscape from nature" under the influence of Michallon, "whose only advice was to render with the greatest scrupulousness everything I saw before me"; he went on to study, as Michallon had, under Jean-Victor Bertin, a celebrated historical landscape painter. Under Bertin's tutelage, Corot continued to draw from nature, and made copies of botanical studies and other engravings. These years were dedicated to capturing nature in action: settling himself on the banks of the Seine, or in the forests surrounding Paris, Corot made quick sketches of the landscape, and detailed studies of the regional flora.

As was the tradition for young artists, Corot travelled to Italy in November 1825 - the first and longest of three trips - spending several highly productive years there. Drawn to the ruin-spotted landscapes of Rome, he made oil sketches of the Colosseum, the Castel Sant'Angelo, the Farnese gardens, and various other landmarks. In 1827, his first successful submission to the Paris Salon, The Bridge at Narni (1826-27), was sent on from Rome; he would go on to show around 100 times at the Salon. In total, he completed over 150 works during his three years in Italy, cultivating his skills as a plein air painter, and absorbing the lessons of Claude Lorrain and other classical landscapists. On his return to France in 1828, Corot developed a new resilience and dedication to his career. He famously decided never to marry, writing to a friend that "[a]ll I really want to do in life [...] is to paint landscapes. This firm resolve will stop me forming any serious attachments."

His first Italian tour under his belt, Corot established an annual routine: sketching outside in the spring and summer, he returned to the studio to work through the winter, striving to make a name for himself as a landscapist at the Salon. His travels across France proved just as fruitful as his Mediterranean sojourn: an 1829 visit to the rural commune of Barbizon, the first of several, put him in contact with the budding school of landscape painters based there, and offered him his first glimpses of the rugged Fontainebleau Forest surrounding it. Trips to Chartres, Ville d'Avray, and Normandy were similarly important, allowing him to explore the diverse terrain of his home country, and to perfect his mastery of light, composition, and tonality. A second, six-month trip to Italy - this time to the north - inspired him to greater stylistic heights: many of the major works that followed are notable not only for their Mediterranean setting, but for their markedly Neoclassical style, incorporating literary and religious motifs into the natural setting, as in Hagar in the Wilderness (1835). Corot's historical landscapes of the 1830s were well-suited for the Salon of the day, and he steadily developed a reputation as an accomplished painter of large-scale landscapes. The late 1830s and early 1840s was a period of Corot's gradual ascension within the art world. Early critics were often cautious in their praise of Corot, with significant exceptions such as Edmond de Goncourt, and the poet Charles Baudelaire who, in his Salon review of 1845, crowned Corot as the leader of the school of modern landscape. From this point onwards, Corot became more and more ingratiated in the Parisian art scene, with important acquisitions by the State and members of the aristocracy contributing to his visibility. His relationship with the official bodies of the art world was strengthened by Louis-Napoléon's rise to power following the 1848 uprising, after which Corot was elected to the 1849 Salon jury; by 1851, Philippe de Chennevières was declaring him "the greatest landscape painter of our time". At that year's salon, Corot displayed a work that marked a turning point in his career, Morning (1850). Acquired by Louis-Napoléon himself, this painting was nominally on a mythological theme, but narrative had become secondary to the nuanced atmospheric effects for which Corot would become revered.

1851 also saw the death of Corot's mother, just four years after the death of his father. The painter had been supported by his parents well into his forties, and with his mother's death he finally moved out of the family home, taking a new apartment and studio in Paris. His sense of freedom and mobility renewed, he began to travel extensively through France, Belgium, Holland, and Switzerland, widening his social circle to take in more artists and critics, such as the Barbizon painter Charles-François Daubigny. From the early 1950s onwards Corot also began taking on students, albeit on a fairly informal basis. His pupils, including the Impressionist Camille Pissarro, praised him as a generous and talented teacher; Daubigny, having passed a summer in Corot's lodgings, described him in a letter to a friend as "a perfect Old Man Joy". Seen by all as cheerful and warmhearted, Corot was surrounded by a supportive group of critics and artists. The writer Théophile Silvestre, however, would confess his concerns about the depth of Corot's contentment in an 1853 monograph, writing that "Corot sometimes exaggerates even to himself the cheerfulness of his character, while I see the melancholy so often present in his work and the expression of sadness that occasionally takes possession of his features." The last 15 years of Corot's life were his most critically and commercially successful. Turning his attention to literary motifs, he produced a number of large-scale figural compositions, such as Macbeth (1858-59) and Dante and Virgil (1859), earning him the reputation of a 'poet', his paintings described as "reveries" and "musings on nature." This phase in Corot's work was described by critics as demonstrating his extreme sensitivity to nature, with one going so far as to write: "[t]his is not a landscape painter, this is the very poet of landscape [...] who breathes the sadnesses and joys of nature." Some works, such as Souvenir of Mortefontaine (1864), are inventions from the studio rather than studies from life, though he also continued to paint en plein air. Corot's work of the 1860s also represents a considerable movement away from color, as he increasingly simplified his palette, painting at times in a near monochrome: perhaps indicating his newfound interest in photography and cliché-verres (drawings rendered on photographic plates). The public took notice of this shift, with a Parisian drapery even marketing one of their fabrics as "Corot gray." 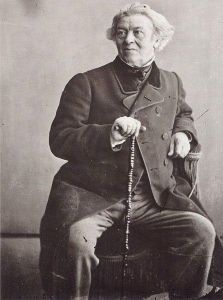 During the late 1860s Corot suffered from a number of health issues that restricted his ability to travel. Bound to his studio, he began to develop another aspect of his practice: figure painting. Corot's figurative works demonstrate the scope of his training and taste, blending the lessons of the Renaissance masters with the themes and moods of literary romanticism. While some of his figures, such as Agostina (1866) and Sibylle (1870), are posed for half-length portraits, other figure paintings incorporate the tropes of his landscape work, such as Repose (1859) and Bacchante by the Sea (1865), which include mythical-seeming bathing figures. Though Corot was known above all as a landscapist, his figure paintings were admired by artists such as Edgar Degas, who wrote of Corot in 1883: "[h]e is still the strongest. He anticipated everything."

The 1870s saw the birth of the Impressionist movement, and a shift in the public perception of Corot's work. Though still admired, and in many ways perceived as a precursor for the new style, his art was, almost as a result, increasingly seen as belonging to the past, a retrograde form of painting in light bound to the era of the Third Republic. Rather than earning him scorn, however, his oeuvre was nostalgically praised by younger artists as an emblem of a simpler time, while Corot himself acquired a kind of grandfatherly reputation. The young artists' affection for him might partly have reflected the fact that, as an established member of the Salon jury, Corot was an active defender of Impressionism throughout the 1860s-70s. At the same time, he remained creatively active in the years before his death, from a digestive disorder in 1875. His contribution to the Salon of 1874 earned him excellent reviews, and, in the words of art historian Gary Tinterow, he "lived his last days as if he were preparing for beatification," surrounded by students, friends, and admirers. Corot would be fondly remembered in the following decades, elevated to the status of a kind of patron saint of French landscape painting.

The Legacy of Jean-Baptiste-Camille Corot Though he presented himself as a man at odds with the modern world, Corot's impact on the art of the late-19th-century and early-20th-century avant-gardes should not be underestimated. Despite his old-world classicism, he was considered by fellow artists and art-world figures such as Alfred Barr (founder of the Museum of Modern Art in New York) as a progenitor of Modernism. Barr claimed that Corot's influence on the trajectory of European painting was on par with that of Paul Cézanne; certainly, Corot's plein air work was foundational to the birth of Impressionism. Claude Monet stated in 1897 that "[t]here is only one master here - Corot. We are nothing compared to him, nothing"; in the final decade of his life, the Impressionist generation came to refer to him as "Père Corot." His own students included the Impressionist Berthe Morisot - who, despite the general restriction of women to painting interiors, inherited her teacher's taste for composing landscapes on location - and Camille Pissarro, whose use of dappled light and delicate brushstrokes bear the clear traces of Corot's influence. Corot must be acknowledged as a pivotal figure in the history of modern art, a link between the traditions of Neoclassicism and the directions that followed.