George Bellows was born into a devout Methodist family consisting of his architect father, George Bellows Senior, and his mother Anna Wilhelmina Smith who came from Long Island, New York where her father worked as a whaling captain. His only sibling, a significantly older half-sister Laura, from his father's first marriage, moved away when George was only two years old.

Encouraged by his maternal aunt Elinor, Bellows's desire to become an artist took hold at an early age. He would often use discarded pieces of paper from his father's work desk to create his drawings which became popular with other children in his neighborhood. Upon request, he would make works for them that usually featured a marching line of animals or trains. In describing Bellows, one former neighbor Harriet Kirkpatrick stated, "Whenever I think of George, I think of a solemn little boy who sat on our stone front steps drawing on yards of ribbon paper. It was a command performance, and we would pay him with dates and figs".

The other love of Bellows's childhood was sports. Not being very tall or muscular as a child, Bellows still believed he had a better chance of proving himself as an athlete than an artist. Once, while serving as a scorekeeper, he was put in the game when one of the regular team players did not show up. He performed so well that he secured a permanent place on the team. But though Bellows continued to play sports in high school, his bigger interest was showing in his art classes, something his parents did not approve of or encourage.

Despite a lack of familial support, Bellows enrolled in college at Ohio State University in 1901 with the intent of studying art. He soon began making drawings for school publications and created an oil painting that won an award at the state fair in 1903. His devotion to art was so strong in fact that he turned down an offer to play professional baseball with the Cincinnati Reds to focus on making a career as an artist.

As he progressed with his formal studies, Bellows realized that his training was restrictive and decided not to sit for his final examinations in 1904. Having intentionally failed his junior year, Bellows Senior accepted the fact that his son was serious about becoming an artist and supported him financially in his move to New York. It was after arriving in New York City in the summer of 1904 that Bellows's art studies began in earnest. He enrolled in the New York School of Art where he would mix with classmates including Edward Hopper, Rockwell Kent, and Edward Keefe. There he also met his future wife, and fellow art student, Emma Louise Story.

The greatest influence at this school however came from two tutors. Robert Henri helped to focus the direction of Bellows's art, and the two developed a friendship that would last for the rest of their lives; Bellows once stated that "Robert Henri is properly 'my father'". It was under Henri's direction that Bellows first took putting everyday life of New York City onto his canvases. In 1909, when Henri would break with the New York School of Art and open the Henri Art School, Bellows would follow him there. A second tutor, John Sloan, would also help to shape the direction of his early art and the two would go on outings together in search of everyday city subjects to paint.

The gritty subject matter of Bellows's paintings secured his inclusion in a group of like-minded artists known as The Eight. The group, which was was founded by Henri and included Sloan amongst its members, promoted a unique brand of American realism that eventually expanded into what became known as The Ashcan School. Bellows's membership of The Eight enabled him to partake in the important Exhibition of Independent Artists. The exhibition, which Bellows helped to organize, opened in April 1908 but the realist style of art displayed was met with mixed reviews. However, Bellows did particularly well with one patron, Joseph B. Thomas, who purchased three of his paintings. Bellows's success in early exhibitions led to the first of many teaching jobs. Throughout his career, Bellows would supplement his income with teaching posts and by making drawings for magazines such as American Magazine, Harper's, and The Masses. His first teaching appointment was perhaps the most important job on a personal level since, as an instructor in 1910 at the Arts Students League, he was able to obtain sufficient funds and financial security to marry Emma (which he did in September of that year). The wedding almost did not take place however since Bellows, deeply focused on his art, spent the morning working in his studio where he lost track of time, forgot the address of the church, and only just made the ceremony. Despite this, the marriage would be a happy one with Emma nurturing his career. She and their two daughters, Anne born in July 1911 and Jean born April 1915, would often serve as subjects for his portrait paintings.

Unlike many artists at the time, Bellows never felt the need to travel to Europe to paint; instead his inspiration came from the rich diversity that could be found in America. In addition to the lure of New York City, and time spent painting portraits, Bellows's subjects were often drawn from the many domestic locations he visited throughout his life; including California, the Catskills, Long Island, Maine, and Rhode Island. While paintings remained a key element of Bellows's output throughout his career, in the last decade of his life the artist developed an interest in lithography. He hired a press assistant, George C. Miller, to work with him in his studio and had a successful showing of his lithographs in 1916. As with his paintings, the subjects of his lithographs were diverse including a series of eighteen works on the horrors of World War I. He added to these several images of social outings and gatherings, and later, several family portraits. 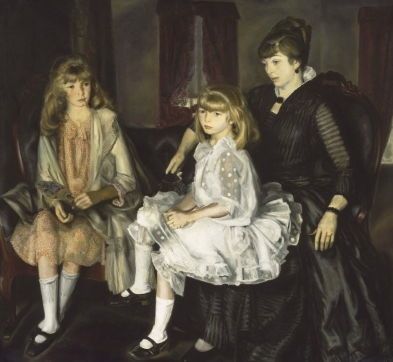 Often seeking refuge from the dense grind of the city, Bellows made what would be an important visit to Woodstock, New York in the summer of 1921. He and his family became so enamoured that they bought land there and in 1922 Bellows played a major role in building a home and studio. Woodstock provided a source of great inspiration for the artist resulting in many late career paintings and lithographs of which the artist once stated, "I am afraid I am getting into the Woodstock habit of working a month or so on a 'Masterpiece.' We will see what we shall see". Unfortunately, Bellows would not have much time in Woodstock. In the summer of 1924, he developed stomach pains and learned he had issues with his appendix. Ignoring his pain, and the advice to seek urgent medical support, having celebrated the new year he was rushed to the hospital where he died of peritonitis a few days later, aged just forty-two.

The Legacy of George Bellows With his gritty depictions of everyday life in New York City George Bellows played a key role in the Ashcan School. His unapologetically raw paintings provided a record of the urban experience. In addition, through these works he demonstrated that modern art movements did not have to develop in Europe alone. Rather, he contributed to the advancement of a uniquely American approach to modern realist painting which laid the foundation for future generations of American artists to build upon.

In addition to his role as a painter, Bellows's legacy was further shaped by his dedication to and advancement of lithography. He defied the public attention on other forms of artmaking and succeeded in creating a market for lithographs of which biographer Mary Sayre Haverstock writes, "many of his friends advised him not to waste his time, because nobody collected lithographs anymore [...]. But Bellows was determined to put lithography on the map...". Paintings and lithographs by Bellows are held in all the major American galleries, while his 1919 painting Three Children was acquired by the White House in 2007 where it now proudly hangs in the Green Room.