Raised in Bolton-le-Moors, Thomas was the only boy amongst the eight children born to parents Mary and James Cole. His father was a woolen manufacturer who often moved the family around during Thomas's childhood, in search of better employment. This peripatetic lifestyle provided various opportunities for the young artist, including an apprenticeship in a printshop in Chorley at the age of fourteen, where he learned how to engrave designs for calico fabrics, and a period of work as an engraver in Liverpool during 1817. Cole developed a love of nature in his youth, and would often take walks with his sister Sarah to admire the landscapes of the north of England.

Cole developed an early interest in North America through his reading, which would serve him well when the family relocated there in 1818. Still a teenager, Thomas initially remained in Philadelphia while the family moved on to Ohio; it was in Philadelphia that, in addition to working as a textile designer, he received an early commission to engrave illustrations for a new edition of the seventeenth-century puritan John Bunyan's book Holy War (1682). After a brief trip to the West Indies in 1819, Cole moved to Ohio to be near his family, and to help with the wallpaper business which his father had established. He studied painting for the first time, and was commissioned to create various portraits and landscapes. In 1823, Cole returned to Philadelphia, attending classes at the Pennsylvania Academy of the Fine Arts. Two years later, ready to start a formal artistic career, he moved to New York; once he had settled in the city, he began to take trips along the Hudson River Valley to paint the American wilderness. The young artist felt an immediate sense of communion with the landscape of the area, which would remain with him throughout his life. The work which he created from this point onwards became the touchstone for the movement in Romantic landscape painting known as the Hudson River School. His own aims for that work are summed up in a poem from 1825, "The Wild":

Friends of my heart, lovers of nature's works,
Let me transport you to those wild, blue mountains
That rear their summits near the Hudson's wave [...]

He hoped that his depictions of the "blue mountains" of the Catskills might grant his viewers "a sweet foretaste of heaven". But Cole was under no illusions as to threats facing this heavenly landscape: even on his first trips up the Hudson, he would have encountered signs of industry - sawmills, tanneries, burned-over fields - amongst the beauty.

Cole's career received a major boost in 1825 when he sold paintings to two of the most prominent artists of the day, Asher Brown Durand and John Trumbull, and to the influential writer and historian William Dunlap. The following year, Cole was elected to the National Academy of Design, where he often exhibited.

Like all white American artists of the period, Cole's cultural background was European, and he felt it necessary to study the great masters of the Classical and Renaissance traditions to perfect his craft. So, in the summer of 1829, he set off on an extended tour of Europe, making a trip to the Niagara Falls just before leaving. As the artist put it, "I cannot think of going to Europe without having seen them. I wish to take 'a last lingering look' at our wild scenery. I shall endeavor to impress its features so strongly on my mind that in the midst of the fine scenery of other countries their grand and beautiful peculiarities shall not be erased." By the time of his trip, Cole's reputation as a landscape painter was already firmly established in his adopted country, to the extent that his friend, William Cullen Bryant, wrote a poem in honor of him just before his departure, entitled "To Cole, The Painter, Departing for Europe". In it, the author begs the artist not to forget the beauty of the New World amongst the wonders of European art history.

Cole learned much from his European visit, and was able to meet the English Romantic landscape painters John Constable and J M. W. Turner, as well as the portraitist Thomas Lawrence; the art historian Matthew Baigell suggests that Turner's cityscapes subsequently influenced the composition of Cole's Course of Empire series. He also showed his work in various exhibitions while abroad. Notably, while he was considered a progressive figure in America, he was reluctant to embrace some of the more radical stylistic developments evident in his British compatriots' work, in particular that of Turner, whom he felt focused too much attention on impressions of color and light. It was his time in Italy that Cole enjoyed most, stating: "I am not surprised that the Italian masters have painted so admirably as they have: Nature in celestial attire was their teacher."

Cole's return from Europe in November 1832 heralded the start of an important phase of development in his artistic career and in his personal life. In 1833, he met his future patron Luman Reed, for whom he began work on an iconic series of paintings entitled The Course of the Empire (1836). The same year, he married Maria Bartow, the niece of a farm-proprietor from whom Cole was renting a studio in Catskill, New York while he worked on the series. The couple decided to move permanently to Catskill, whose surrounding landscapes were a rich source of inspiration for Cole. It was there, in 1835, that he wrote his influential "Essay on American Scenery", which considers the encroaching threat of industrial development to the natural world: "there are those who regret that with the improvements of cultivation the sublimity of the wilderness should pass away: for those scenes of solitude from which the hand of nature has been lifted, affect the mind with a more deep toned emotion than aught which the hand of man has touched." 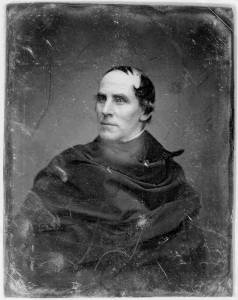 The later years of Thomas Cole's career were ones of reflection and frequent sadness. He was deeply troubled by the onward march of urbanization and industrialization that seemed to threaten the American wilderness; he is said to have despised cities, finding, as Matthew Baigell puts it, "a presentiment of evil in them". Cole's paintings, meanwhile, still depicting the landscape, increasingly seemed to become vehicles for him to address issues such as the passage of time and history, as in his Voyage of Life (1842) series.

Cole was also suffering from a period of ill health, and in the summer of 1841, he decided to travel once more to Europe. Upon his return to New York a year later, he joined the Episcopal Church, and from this point onwards religion would play an increasingly central role in his life. Of the influence of spirituality on art he stated: "Art, in its true sense, is, in fact, man's lowly imitation of the creative power of the Almighty." In 1844, he agreed to take Frederic Edwin Church on as a pupil. This was a fortuitous decision, as Cole would greatly influence the young artist's work, through which the legacy of the Hudson River School, and of Cole's painting in particular, was ensured.

During the summer of 1847, perhaps longing once more for a glimpse of untainted nature, Cole traveled again to the Niagara Falls. This would prove to be his last major expedition, as he died in February the following year at the age of forty-seven. Summing up the power of Cole's work, his friend the author William Cullen Bryant stated in a eulogy delivered at the artist's funeral that "[t]he paintings of Cole are of that nature that it hardly transcends the proper use of language to call them acts of religion."

The Legacy of Thomas Cole 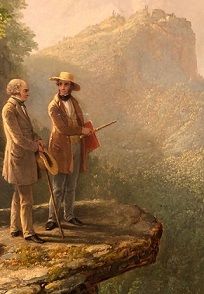 While Romantic landscape painting was a firmly-established tradition in Europe by the early 19th century, Thomas Cole was the first artist to forge a version of that style centered on, and inspired by, the North-American landscape. In so doing, he effectively laid the foundations for the entire style of Romantic painting in North America. He is also considered the father of the Hudson River School, despite never specifically aligning himself with that or any other group. Cole's legacy is evident in the work of future American artists who advanced the Hudson River style, including his student Frederic Edwin Church, Albert Bierstadt, Jasper Cropsey, Asher B. Durand, George Inness, John Kensett, and Thomas Moran.

Speaking more broadly, a whole sweep of 20th-century North-American art, from Precisionism to Land Art, might be seen to have inherited something of the grand scale and ambition of Cole's work. In this sense, his paintings capture not only the character of American culture during the mid-19th century, but perhaps something more enduring about the open and expansive quality of that culture.